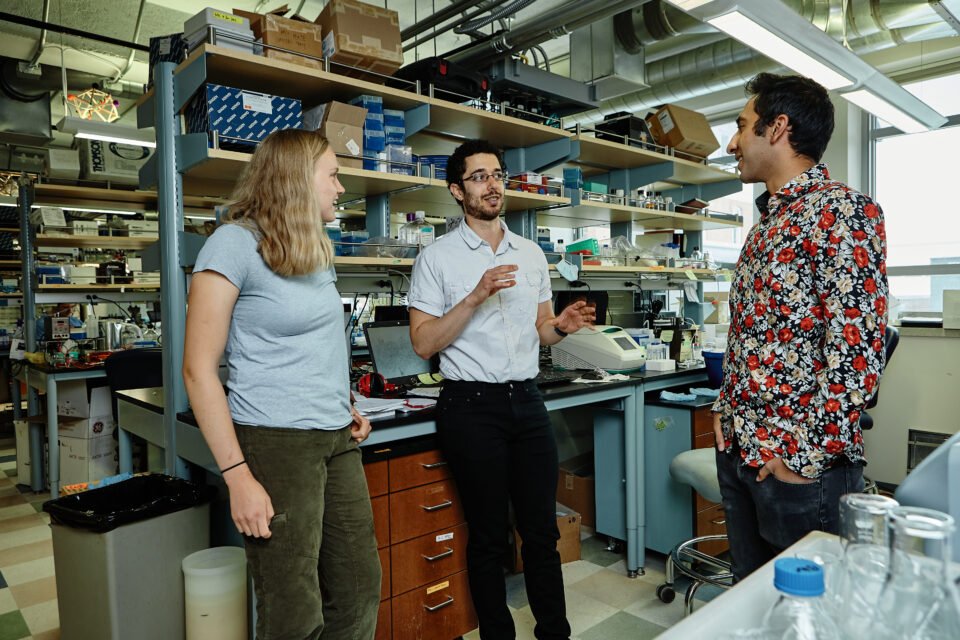 Andrew Santiago-Frangos with fellow researchers in the lab. The post-doctoral researcher at Montana State University believes the test will change the way viral pandemics are contained

There is an urgent need for inexpensive new technologies which enable fast and reliable detection of viruses. The coronavirus pandemic has clearly highlighted this as the tiniest germ has upset societies globally.

One Cypriot researcher has been successful in developing a new technology which will do just that.

“Frequent tests and quick results are critical for limiting the spread of the SARS-CoV-2 and ending the Covid-19 pandemic,” says post-doctoral researcher Andrew Santiago-Frangos, a Cypriot who recently led a team to develop a new SARS-CoV-2 diagnostic, in Dr Blake Wiedenheft’s lab at Montana State University. He believes this revolutionary test is bound to change the way viral pandemics are contained.

The results were recently published in the prestigious journal Cell Reports Medicine and Santiago-Frangos, who obtained his doctorate in biology at Johns Hopkins University, told the Sunday Mail about them this week. First, he explained how ancient strategies used by bacteria to battle viruses can be repurposed into transformative technologies.

“Bacteria and the viruses that infect them have been in a conflict for billions of years. Over this time, both bacteria and viruses have developed many strategies to destroy the other. Scientists can repurpose these strategies, originally intended to detect bacterial viruses, to instead detect the presence of viruses that are of interest to us,” he said.

“Once a bacterium encounters a virus, it makes a genetic memory of the virus that it can then use to fight off that virus more effectively in the future. It’s a very similar idea to how humans develop an immune response to viruses.”

His team is using CRISPR, a bacterial immune system to detect SARS-CoV-2.

“Scientists are repurposing CRISPR to do amazing things, including to cure genetic diseases and to detect viral infections. In addition, this ancient strategy developed by bacteria over millennia, CRISPR, is programmable! Within as little as a single day, it can be redesigned to detect any other disease-causing virus or bacteria, as needed.”

Santiago-Frangos was studying CRISPRs when he and Dr Blake Wiedenheft decided to switch their focus to tests early last year.

“When the pandemic started, our interest in CRISPRs collided with the need for diagnostics that we saw around us and on the news,” said Santiago-Frangos.

Working alone in the lab because of Covid-19 precautions, he saw a test solution turn from purple to yellow, the first proof he was on to something.

“The first test that we got working requires a special and expensive machine to measure the result which wasn’t visible to the naked eye. But the second readout that we developed causes a striking change in colour from purple (negative), to yellow (positive for SARS-CoV-2). It’s easy to get excited about an experiment with such a drastically visible change. I was ecstatic! Normally I would’ve gone over to Blake to show him the results in person, but MSU was advising people to work from home if possible, so I called Blake to tell him the good news,” Santiago-Frangos says. “I then emailed him a picture of those tubes as soon as the experiment was done, and he still has that picture set as his background desktop to this day.”

Blake Wiedenheft, an associate professor in the department of microbiology and cell biology in MSU’s College of Agriculture, immediately understood the significance of the findings.

“The coronavirus revealed the limitations of our standard diagnostic tools, which are relatively slow and expensive,” Wiedenheft commented. “The fact that a bacterial immune system could be repurposed to address those shortcomings is remarkable.

“This test can be sent to your home and within seconds you will know the answer. This will eliminate the need to go to a setting which is complicated by meeting lots of other people.”

The technology could also be used against other viruses such as Zika and Ebola, Wiedenheft added. “We intend to continue to develop this into a superior diagnostic tool that could really help patients and be an important contribution in the fight against disease.”

The next steps in making the technology useful are streamlining and packaging the chemistry into a form that can be administered in a medical setting, he explained. Andrew and Blake have filed a patent and this technology is now licensed to a local start-up company, VIRIS Detection Systems, which is currently working on food and drug administration authorisations. The company hopes to roll out the CRISPR-based test later this year.

Santiago-Frangos, in the meantime, has deservedly become well known because of this important discovery and his results have not only been published by the journal but he has also presented them on major US news outlets such as Fox and ABC.

Sustainable investments account for about one third of global assets