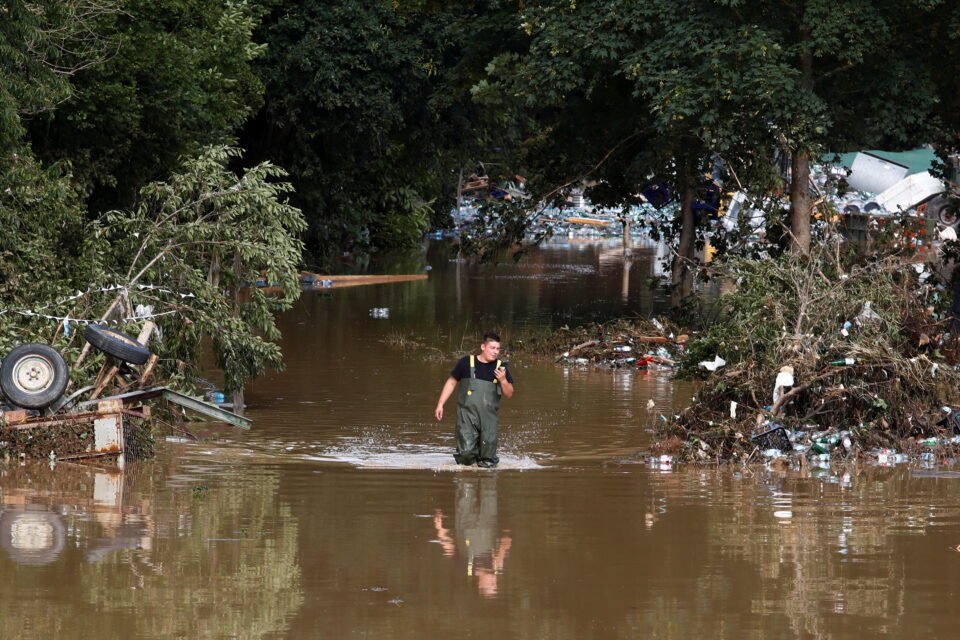 A man walks through in Bad Neuenahr-Ahrweiler, Germany

Flooding has devastated parts of Western Europe since last Wednesday, with the German states of Rhineland Palatinate and North Rhine-Westphalia, as well as parts of Belgium, among the worst hit.

In the Ahrweiler district south of Cologne, at least 117 people were killed, and the death toll is expected to rise as the clean-up continues.

The high death toll has raised questions around why so many people seemed to have been surprised by the flash flooding.

Michael Theurer, a senior member of the opposition Free Democrats (FDP), said in an interview with news agency DPA that the toll revealed a “systemic failure” in the emergency response. Susanne Hennig-Wellsow, chief of the left-wing Linke party, on Sunday called for Seehofer to step down.

Seehofer said in response that the German National Meteorological Service (DWD) issues warnings to Germany’s 16 states and from there to districts and communities that decide at a local level how to respond.

“It would be completely inconceivable for such a catastrophe to be managed centrally from any one place. You need local knowledge,” Seehofer told journalists on Monday.

“It’s not Berlin that declares a state of emergency, that is done locally,” he said, adding that criticism of the emergency response was “cheap election campaign rhetoric”.

The devastation of the floods, attributed by meteorologists to the effects of climate change, could shake up Germany’s federal election in September, which until now had seen little discussion of climate.

Local authorities said on Monday that the Steinbachtal dam, which had been at risk of breach for several days, prompting the evacuation of thousands, had been stabilised and that residents could return home later in the day.

The worst of the flooding saw entire communities cut off without power or communications. Residents were trapped in their homes by fast-rising floodwaters and a number of houses collapsed, leaving what German Chancellor Angela Merkel on Sunday described as “terrifying” scenes.

The DWD weather service had warned on Monday last week that heavy rain was heading to western Germany and that flooding was very likely. On Wednesday morning, it said on Twitter that the risk of flooding was increasing and called on the population to seek guidance from local authorities.

The German government is readying a relief package for hard-hit communities in North Rhine-Westphalia and Rhineland-Palatinate, and also in Bavaria and Saxony, where there were fresh floods over the weekend.

One government source told Reuters on Monday that immediate relief worth around 400 million euros ($340 million) was being discussed, half of which would be paid by the federal government and half by the states.

The relief package, which is also expected to include billions of euros for longer-term rebuilding efforts, is due to be presented to the cabinet on Wednesday.

Sustainable swimwear: Get ready for summer with these eco-friendly swimmers