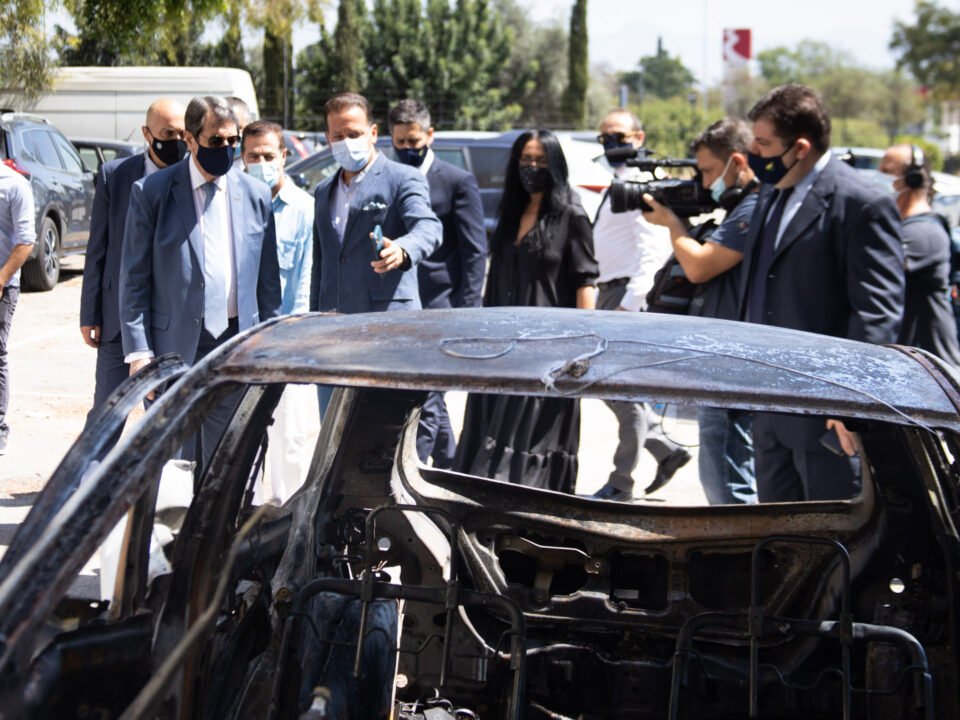 President Nicos Anastasiades on Monday said that silencing of the media will not be accepted, after an attack on Sunday night against the offices of the Sigma media group that saw the property trashed and cars set on fire.

He was speaking at the Dias group building that houses Sigma, prior to a meeting at the presidential palace to discuss the attack.

Anastasiades said he will give “more than strict” instructions to officials over the incident, with the aim to “combat the illegalities” and those who are under the impression that they can threaten the state.

The state will not tolerate such actions, which bring Cyprus back to the pre-1974 situation, the president said.

“We will stand by the side of every mass media to be able to express freely any opinions,” he said. He added the state will support Sigma as the amount of the damage appears significant.

The meeting, which was attended by Justice Minister Stefi Drakou and the police chief Stelios Papatheodorou was completed with Anastasiades submitting “strict instructions” to police on how to prevent similar incidents in the future.

The Dias building was broken into and vandalised at around 9.30pm on Sunday by a group of protestors who attacked staff, set fire to cars in the parking lot and trashed the offices.

Five people who were arrested late on Sunday, were remanded for four days by the district court in Nicosia, despite officers requesting a remand for eight days. The suspects so far have denied any association with the incident.

Later in the day police announced that a further four arrests had been made, without providing further details of those detained. They said that the total number of people being held has now risen to nine.

Twelve more people were being sought in relation to the incident, police said on Monday after publishing photos of the suspects taken from CCTV cameras.

Nineteen people were initially being sought but nine have been identified so far and a warrant for their arrest is expected soon.

Early on Monday, SigmaLive reported that the material damages at the site amount to “thousands of euros” which include private property. But the most concerning thing, the group said is that “unrepentant thugs” attempted to overthrow the freedom of press and democracy”.

Sigma said that dozens of employees working at that time were attacked by “the cowardly mob”. A Molotov cocktail was thrown at one car, which erupted in flames and was destroyed.

During the attack and the arrests, 12 police officers were injured, of which seven were taken to hospital.

Sigma had to interrupt the live broadcasting of the news due to the attack, after journalist and presenter Nestoras Vasiliou made a plea to the police to intervene, while employees’ screams could be heard in the background. On Monday, Vasiliou told the media that “it was a miracle” they did not mourn human lives and urged the state to ensure that “we do not experience something similar” again.

Sigma CEO Chrysanthos Tsouroullis told CyBC he was surprised how teenagers wearing hoods could “threaten with death their fellow citizens” for performing their duty to inform others.

The group of attackers came from the ranks of protesters who were outside the presidential palace on Sunday evening demonstrating against the SafePass. Demonstrators also claimed they wanted an end to “the intimidation, blackmail, and threats of dismissal against public and private sector workers because they refuse to get the jab”.

Tsouroullis has been outspoken on his personal Twitter account about the need to get vaccinated, calling those who refused to get the jab “stupid” in a July 2 post.

“Those who tried to silence us have failed,” he said. The CEO said that Sigma broadcasts news “after we check it and we know that it is not fake news”.

Against the backdrop of the disagreement among vaccinated and unvaccinated, Health Mnister Michalis Hadjipantelas reiterated that people cannot be divided into sides.

Condemning the incident at Sigma, he said “we are ready to listen to our compatriots who have some concerns to be vaccinated, and to persuade them to be vaccinated if they decide to do so.”

If people choose not have the vaccine, the minister said “we will respect their decision but at the same time we understand and respect our compatriots who have been vaccinated,” he said.

The incident was also condemned by The Cyprus Radio Television Authority which expressed its support for Sigma. The authority said that despite it respecting the right of everyone “to express freely their opinion on issues that concern the Covid-19 pandemic”, it would not accept “criminal behaviours”.

Also expressing solidarity with the media and those attacked, the Committee of Journalistic Ethics (EDD) said the attack “is a blow not only to democracy and freedom of expression, but also to every human right.”

The committee called on the state to implement measures “to protect media workers more broadly in the free exercise of their profession”.

Labour union Deok also issued a statement on Monday saying the events of the previous night “are reminiscent of dark times and phenomena of terrorism in third world [countries] that cannot be accepted in modern democratic regimes.

“A different point of view cannot be expressed by force and by fascist methods and bullying,” the union said.

On Sunday night Anastasiades had said “the state is not threatened or blackmailed by anyone, let alone individuals, who, citing irrational conspiracy theories, try to lead the country to the Middle Ages.”

It also emerged later that clashes had taken place outside the palace between protesters and police after the main event was drawing to a close although the demo itself had been held in a largely peaceful atmosphere.

After the protest had ended, some protestors returned to the palace and threw Molotov cocktails and rocks, to which police responded with tear gas.

Attorney General Giorgos Savvides and Assistant Attorney General Savvas Angelides asked for an “immediate and complete investigation” regarding all aspects of the events that took place at Dias building and outside the presidential palace.

An investigative team has been appointed by the Nicosia police “to fully investigate the incidents and bring those responsible to justice,” police said.

Authorities made a public appeal to anyone who might have more information about what happened late on Sunday to contact Nicosia CID on 22 802222, their nearest police station or the citizen’s line on 1460.

Sustainable swimwear: Get ready for summer with these eco-friendly swimmers