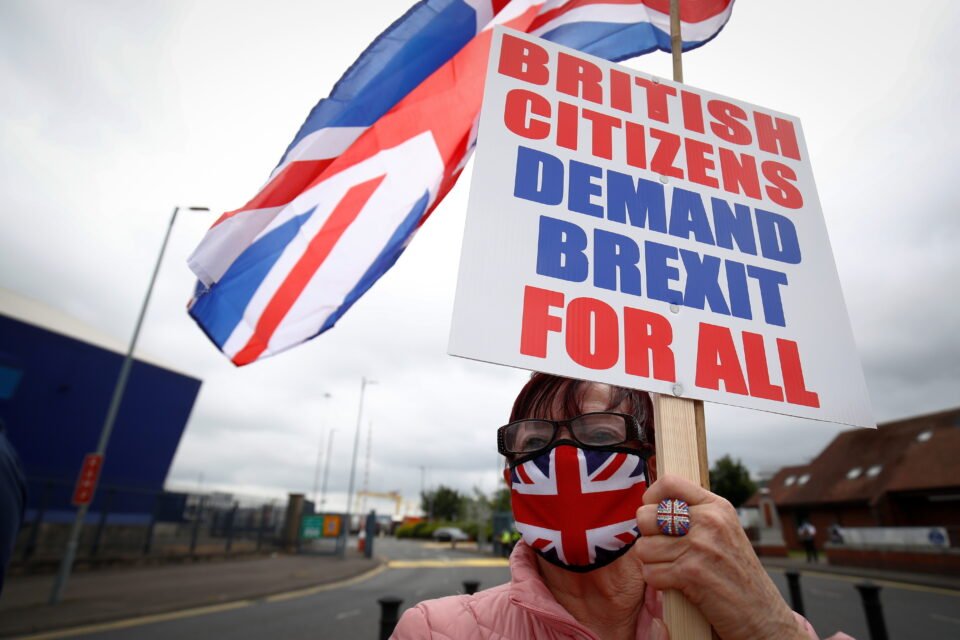 A demonstrator holds a sign during a protest by loyalists against the Northern Ireland Brexit protocol at Belfast Harbour Estate, in Belfast, Northern Ireland, July 3, 2021. REUTERS/Jason Cairnduff

Britain will threaten this week to deviate from the Brexit deal unless the European Union shows more flexibility over Northern Ireland, one UK and three EU sources told Reuters, a move that could thrust the five-year Brexit divorce into tumult.

Deviating from the deal’s so-called Northern Ireland Protocol is a risky step: its aim was to prevent Brexit from disrupting the delicate peace brought to Northern Ireland by the U.S.-brokered 1998 peace deal that ended three decades of sectarian conflict.

Prime Minister Boris Johnson, who signed the 2020 Brexit deal, has been dismayed by the protocol which has imposed paperwork and checks that London says could prevent British food staples such as sausages going to Northern Ireland.

David Frost, the British minister who leads Brexit negotiations, is preparing to announce a significant potential change on the protocol that could have far-reaching consequences for the relationship with the EU, one of the sources said.

The plans are being worked on by Downing Street. Frost is due to update parliament on Wednesday about Northern Ireland and Brexit, and will also present a paper on Brexit to lawmakers.

Asked about the Reuters report, Johnson’s spokesman said: “We will set out our approach to the protocol in due course.”

Brussels expects Frost will push for a deviation from the protocol unless the EU agrees to compromise, said an EU diplomat who was briefed on talks with British negotiators.

A third source, a senior EU official, said Britain would caution the EU that unless an agreement was reached, unilateral measures by the UK would be possible by using Article 16 of the protocol.

“It will be a plea for more talks with the EU combined with a threat,” said the senior EU official. “But we will not agree to the reopening of the Irish protocol.”

Britain is expected to go beyond its demands for changes to veterinary rules. The senior EU official and a second EU diplomat said that London would seek to have the European Court of Justice (ECJ) removed from the arbitration process.

Preserving the peace in Northern Ireland while protecting the EU’s single market but without dividing up the United Kingdom was always the most difficult riddle of the Brexit saga since the 2016 referendum.

Since the United Kingdom exited the bloc’s orbit on Jan. 1, Johnson unilaterally delayed the implementation of some provisions of the protocol and Frost has said the protocol is unsustainable.

Frost is insisting on a bespoke veterinary deal based on equivalence which London says would remove the need for controls on goods crossing from Britain to Northern Ireland.

Britain is arguing that there should be a more flexible approach to agri-food rules to limit the impact on everyday lives and will spell out clearly what the options and risks are.

The 1998 peace deal largely brought an end to the “Troubles” – three decades of conflict between Irish Catholic nationalist militants and pro-British Protestant “loyalist” paramilitaries in which 3,600 people were killed.

That deal guaranteed an open Irish land border to help safeguard peace, free trade and travel on the island.

But that became a problem after the 2016 Brexit vote. The EU could not close the land border between Northern Ireland and Ireland but feared it could become a backdoor into the EU’s single market.

But by putting checks on some goods crossing between mainland Britain and Northern Ireland, many pro-British unionists say the protocol has breached the 1998 peace settlement.

Loyalist paramilitary groups told Johnson in March that they were temporarily withdrawing support for the peace agreement due to concerns over the Brexit deal.

How the digital shift has been hastened by the pandemic