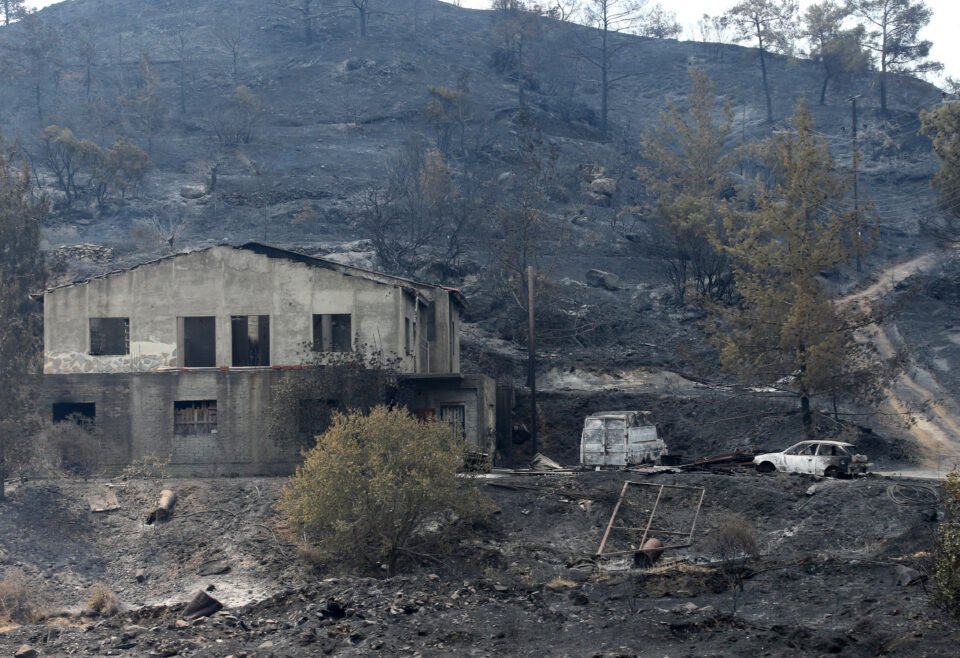 Hillside and home destroyed by the fire that started in Arakapas

A 67-year-old man suspected of starting the fire in Arakapas on July 3 which destroyed over 55 square kilometres and killed four was arraigned before the Limassol district court on Tuesday.

He was then released on bail, which was set at €50,000. His trial will begin at the Limassol Criminal Court on September 6.

In the meantime, authorities seized his travel documents, as he will not be able to leave the country. He will also have to report to a police station three times a week.

Police arrested the man after receiving information that he had been seen burning stubble at the time when the fire started.

An investigative team was set up to tackle the case which is being viewed as arson. It appears that the man’s statements clashed with those made by eyewitnesses. The suspect denied any involvement.

He claimed that he went to water citrus and fruit trees in his field at 10am on July 3.

At 1pm, he went to the Arakapas coffeeshop where he claims that he told a witness he could smell smoke and called 112 from his phone, seeing the flames at 1.53pm.

Police investigators however said this version of events clashed with a witness statement who said they told the suspect that there was a smell of smoke and therefore there must be a fire.

Meanwhile, a specialised team from the National and Kapodistrian University of Athens has arrived in Cyprus to assess the fire damage and to offer assistance to local authorities regarding anti-erosion and anti-flooding initiatives.

The team, headed by Efthymios Lekkas, Professor of Dynamic Tectonics, Applied Geology and Natural Disaster Management at the Greek university, will remain in the island until Thursday, when there will be a meeting with the Agriculture Minister Costas Kadis.

Meanwhile, Kadis said on Monday there was positive response by his EU counterparts to Cyprus’ requests following the Arakapas fire, according to a report by the Cyprus News Agency (CNA).

Kadis was speaking after the Agriculture and Fisheries Council, that took place on the same day in Brussels.

He informed his European counterparts in detail about the devastating fire that took place earlier in the month.

In his remarks, he said he informed all EU agriculture ministers and the European Commission on the extent of the damage and the catastrophic results especially in the agricultural field and called for the Council’s support to restore damages.

After the meeting, Kadis told the media he believes there was positive response by the ministers and Cyprus’ request for practical support was backed by the council.

Along with other EU agriculture ministers, he examined ways to put in action the agricultural development programme to support the farmers affected by the fire.

With the Commissioner for Cohesion and Reforms, he discussed ways to implement the Solidarity Fund for the case of Cyprus as well as other mechanisms of support to help those who lost their businesses in the affected area.