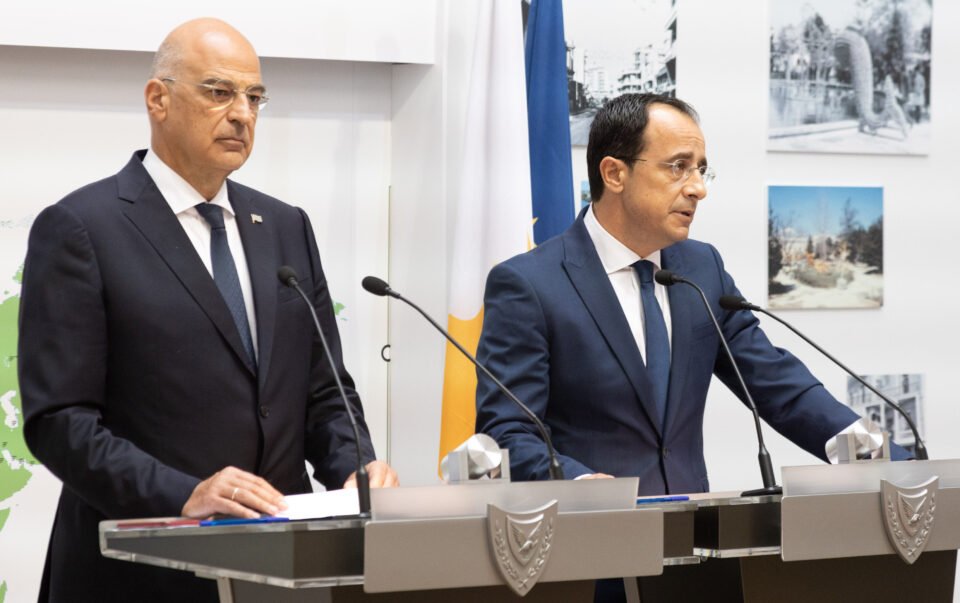 There can be no prospects of improving Greece-Turkey and EU-Turkey relations as long as Turkey insists on breaking the law in Cyprus, Greek Foreign Minister Nikos Dendias said after a meeting on Wednesday with his Cypriot counterpart Nikos Christodoulides.

The two met a day after Turkish president Recep Tayyip Erdogan’s visit to the north, during which it was announced that a small part of Varosha will be demilitarised.

Dendias said that his presence in Cyprus “symbolises the Greek government’s commitment to stand by the Cypriot government and its people, but also stand for international legitimacy”.

The meeting also comes ahead of Wednesday’s scheduled meeting of the UN Security Council, which Cyprus hopes will address Turkey’s move.

“We are sincerely hoping that the Security Council will send a clear message to Ankara,” Christodoulides said, adding that “this message should leave no room for misinterpretation”.

“It is clear that Turkey’s provocative actions aim to promote alternative solutions to the Cyprus problem, something neither Cyprus, nor the international community, will accept,” he added.

“We want to be clear that illegality is not law, violation does not produce rights,” Dendias said, adding he expressed the same view in meetings he had with the foreign ministers of Israel, France and the USA.

Dendias added that aside from having a negative impact on Cyprus, Turkey’s provocations – and its illegal military bases in the north – create a huge rift in regional stability and peace.

He added that there can be no prospects of improving Greece-Turkey and EU-Turkey relations as long as Turkey insists on breaking the law in Cyprus, an opinion shared by the Council of Europe.

“Turkish aggression cannot go unanswered. Our response, as always, will be based on international law and the values that govern us,” Dendias concluded.

Dendias met with President Nicos Anastasiades later in the day after which Dendias said they had an extensive discussion on the next steps in tackling Turkish aggression and unlawful acts.

No direct impact on sales from Ronaldo snub -Coca-Cola CFO