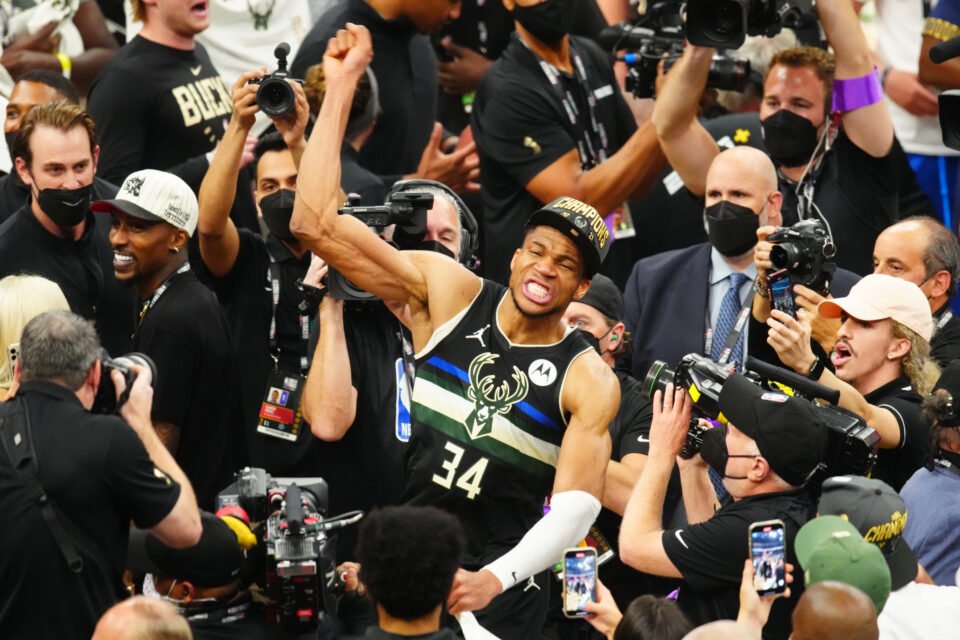 Giannis Antetokounmpo delivered an NBA title for the Milwaukee Bucks with 50 points, 14 rebounds and five blocks in a 105-98 victory over the Phoenix Suns in Game 6 of the Finals on Tuesday night.

Antetokounmpo scored 33 in the second half, including his 50th point on a game-sealing free throw with 9.8 seconds remaining. He was 17 of 19 from the foul line to give the Bucks their first championship since 1971.

Chris Paul had 26 points and five assists for the Suns, who dropped four games in a row after taking a 2-0 lead in the best-of-seven series.

Milwaukee’s Jrue Holiday suffered through a 4-of-19 shooting night but finished with 12 points, 11 assists and nine rebounds.

Phoenix’s Devin Booker missed an open look from 3-point range on the right wing and Khris Middleton made two free throws with 44.7 seconds left to give the Bucks a 104-96 advantage.

On the previous possession, moving to his right from the top of the key, Middleton took a handoff from Antetokounmpo at full stride, rose up and knocked down a clutch jumper with 56.9 seconds left, putting Milwaukee up 102-96. That was the answer to a pair of Jae Crowder free throws at the 1:14 mark.

Booker’s run-out and contested layup put the Suns within 100-94, and Middleton committed the Bucks’ 19th turnover of the game at the other end to hush the home crowd.

Antetokounmpo went over 40 for the third time in the series with a pair of free throws to stake the Bucks to an 88-84 advantage with eight minutes to play.

Antetokounmpo opened the third quarter in bulldog mode, pouring in 12 points in the first 4:33 and tallying 20 in the frame. He showed little interest in sharing in a successive and fruitful run of isolation sets from the top of the key.

The Suns went to the bench when Deandre Ayton picked up his fourth foul but found no counter. Mikal Bridges and Frank Kaminsky were fruitless when Antetokounmpo was on the attack at close range.

Paul was harassed into a pair of critical turnovers and couldn’t find space to set his feet for the mid-range daggers that were available earlier in the game with the Bucks adjusting defensively in the fourth quarter to assign the 6-foot-11 Antetokounmpo to check CP3. Bobby Portis joined the rotation, and the matchups kept Paul off-balance.

Milwaukee had 50 points in the paint.

Turnovers choked the Bucks, but the Suns were unable to capitalize, producing just 16 points off of the freebies. The Bucks were able to salvage points at the foul line, going 25 of 29.

Booker evened the score at 77-all with a pair of free throws to end the third quarter.

The Bucks had clawed back to reclaim the lead with Antetokounmpo‘s consecutive free throws with 8:08 on the clock in the third. He bullied his way for two more on the ensuing possession following a Booker turnover to breathe life into what had become a stressed, silent home crowd.

Paul scored 13 points in the first half, igniting a 31-point second quarter to lift the Suns out of panic mode. Phoenix led 47-42 at intermission, holding the Bucks to 34.9 percent shooting as Antetokounmpo had 17, reviving from a first-quarter disappearing act. Only Portis’ 10 points off the bench, including two 3-pointers, helped the Bucks avoid a massive deficit.

In a Finals defined by heroic individual efforts, a hapless rock fight broke out in the first half. The Bucks went 3 of 17 from 3-point range in the first 24 minutes. Phoenix was 4 of 12.