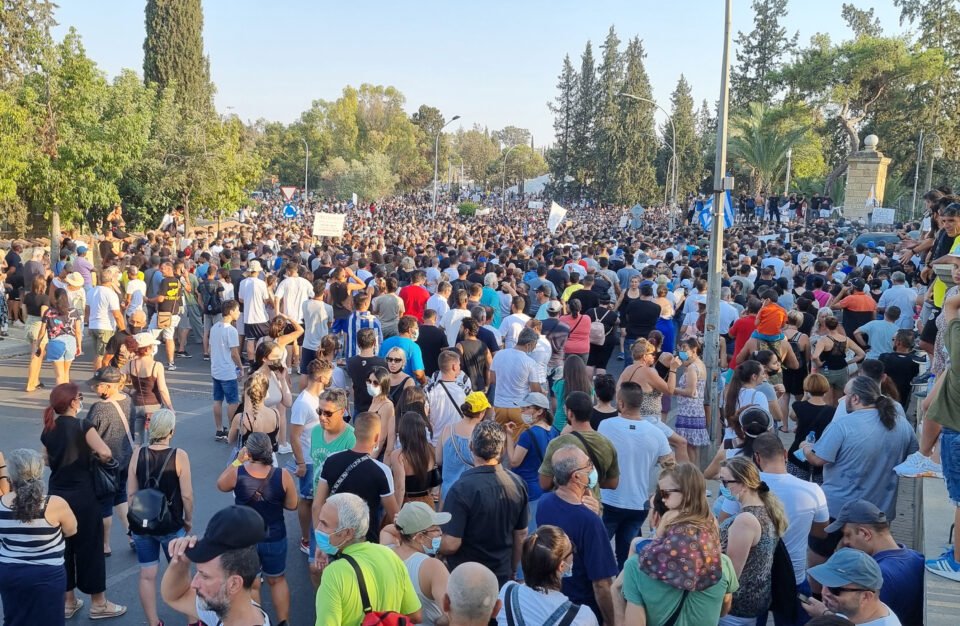 The protest on Sunday

Last Sunday’s demonstration at the presidential palace was overshadowed by the mindless violence that unfolded at the Dias group premises. The fact many of the thugs that went on the rampage, had been at the protest outside the palace seemed to detract from the largely peaceful, if at times highly-charged event.

We cannot ignore that some 5,000 people, according to the police estimate, felt so strongly about the authorities’ handling of the pandemic – they were not all anti-vaxxers – that they showed up to express their discontent. Some were unhappy with the restrictions on personal freedoms, others with the introduction of the SafePass and others with what they saw as jab coercion.

The big turnout illustrated the division in our society, which has been accentuated by the government’s vaccination programme. Society has been divided into the vaccinated and those who refuse to be vaccinated, either because they feel they have the right to decide or because they think the vaccines could cause long-term harm to their health. There is also a lunatic fringe that laps up internet conspiracy theories claiming the vaccines contain a microchip that will turn people into robots.

Inevitably, one group has turned against the other, the vaccinated accusing the unvaccinated of putting lives at risk and the latter accusing the former of violating their rights and freedoms. The government’s fervent campaign, urging people to get vaccinated and its introduction of the SafePass, which is designed to make life difficult for the unvaccinated, have deepened the division and fanned the flames of fanaticism.

Some would argue that the government had no choice, but the truth is that it could have managed the pandemic in a less dogmatic and arbitrary way. It appeared to have been carried away by the fact that it has been ruling by decree for the last 15 months, imposing lockdowns, face-masks, curfews and restrictions of movement whenever it saw fit. And when the vaccines arrived it was under the mistaken impression it could order people to get the jab. Things, however, did not work out as planned, and its thinly veiled coercion tactics appear to have strengthened the resistance of the refuseniks.

The lack of transparency and the decision of the authorities to manage the information they gave out about Covid deaths, presumably, in order to keep fear levels high and encourage vaccinations has been a bad policy. Why for instance did it stop informing us whether people who passed away had underlying health conditions? Why was it refusing to say whether the people hospitalised had been vaccinated? Of course, it subsequently made a 180-degree turn to persuade the young to get the jab, telling us the age range of those in hospital and stressing that 90 per cent were unvaccinated.

This selective use of information made people unable to trust the government and made them feel they were being manipulated. For anti-vaxxers it was a vindication. Can the government fix things now? We cannot say, but it could embrace transparency, avoid playing one group of the population against the other and give all information at its disposal to people. This could be a more effective way of getting more people on side and opting for the jab.