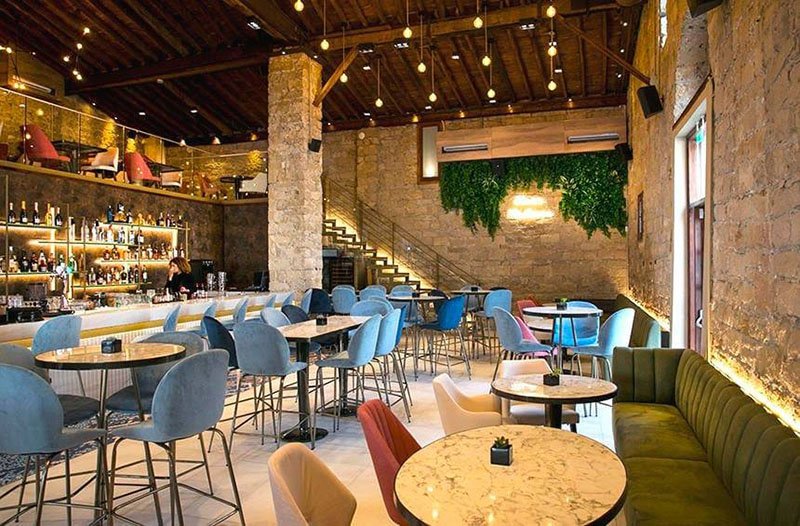 A recent visit on an uncharastically breezy evening to the Black Rabbit bar and restaurant marked a much-anticipated return to maskless, indoor dining, courtesy of the recent relaxation in pandemic measures.

Black Rabbit is situated in the Old Port area of Limassol, part of the rejuvenation project that oversaw the overhaul of the neighbourhood and which includes the creation of the Limassol Marina. Though it is closer to the street than the port and is visible while driving past the final Molos parking area towards the marina, you still have a view of the water in the near distance if you are seated outside.

The interior of Black Rabbit is certainly its aesthetic highlight, with the restaurant retaining the original stone walls of the previous structure while adding a wooden roof and modern furniture, including the sturdy granite-topped tables complete with a minimalist lamp in lieu of the more traditional candle adornment.

We started the night with a pair of mojitos which duly arrived with crushed ice at the top and a piece of dried citrus as garnish. Though it was generally fine and was definitely elevated by the fresh mint leaves, it could have done with a bit less lime juice, which overpowered the rest of the flavours and tipped the bitterness levels to noticeable. Thoughts of asking for a teaspoon of brown sugar entered the conversation but were not acted upon.

Before any of the food items we had ordered arrived we were presented with a complimentary plate of four slices of bread and two ramekins of butter. Both types of bread, one being a traditional white loaf and the other being a high bran rye bread style loaf, were fresh and very tasty. The brown bread was particularly good. The ramekins contained two types of butter, one being truffle butter and then other  mixed with a herb blend that gave it a light green colour.

Our one hors d’oeuvres plate was the beef steak tacos which were cleverly presented fixed between lime wedges. The fillings were nice, including the well spiced slivers of beef, but could have benefited from less grated cheese, which again took away from the flavours beneath, particularly as the cheese had not melted and blended in with the other fillings. 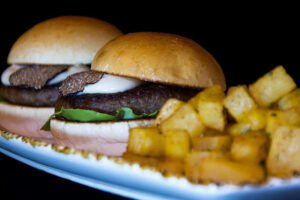 Seeing as they merited their own separate menu, we both went with one of their classic burgers. Two beef patties in a brioche style bun with tomato, onion, lettuce and pickle slices inside, further moistened by a generous injection of homemade jous. They were accompanied by diced fried potatoes which were visibly spiced with paprika, a nice touch, and a small bowl of salad. The burgers were good enough, but at that price you expect something more. Would have gladly traded some of the quantity of the meat, itself of sufficient quality, if the texture was better. While I appreciated the home cooked element, the patties were a bit too soft and crumbly, lacking the combination of a proper crust and a juicy interior of some of the better burgers I’ve had. They almost felt like they were cooked sous vide style and then had the very faint grill marks added during the finish.

We finished the night with a shared profiterole, complete with gold flakes as garnish. It was a nice end to the night, with the rich cream and chocolate combining well during your first few bites, while gradually giving way to a slightly fruity flavour akin to that when one adds freshly peeled orange zest.

Overall the restaurant was promising, with many items being close to nailing the mark but not quite there. This leaves room for improvement and it will be interesting to see if it is seen as a chance to better the finer details.

The future of Bitcoin in the next 10 years