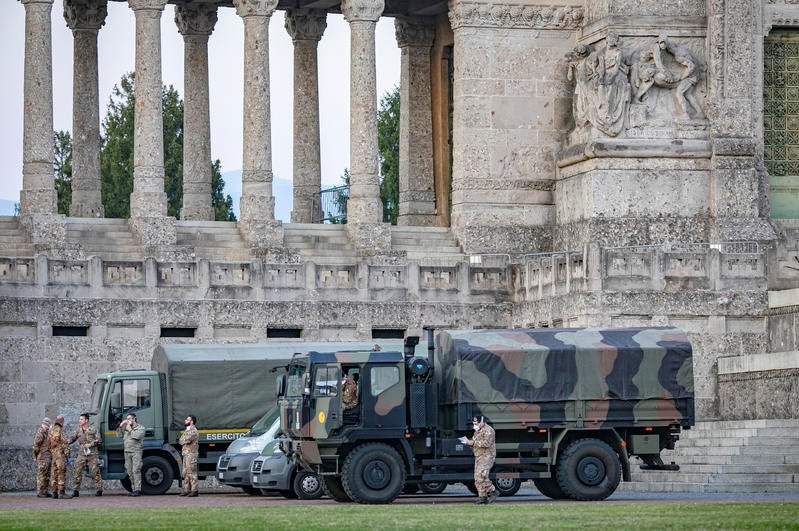 Italian military trucks and soldiers are seen by Bergamo's cemetery after the army were deployed to move coffins from the cemetery to neighbouring provinces, after the cemetery was overwhelmed by the scale of the coronavirus disease (COVID-19) outbreak, in Bergamo, Italy, March 18, 2020. Picture taken March 18, 2020. Sergio Agazzi.Fotogramma via REUTERS ATTENTION EDITORS - ITALY OUT. NO COMMERCIAL OR EDITORIAL SALES IN ITALY AND .IT WEBSITES. THIS IMAGE HAS BEEN SUPPLIED BY A THIRD PARTY. MANDATORY CREDIT.

A dispute over blood tests has raised questions about an Italian study that suggested the coronavirus was circulating outside China much earlier than expected, highlighting the challenges of trying to determine when the virus emerged.

Scientists in Italy last year published a study that showed neutralising antibodies against the SARS-CoV-2 coronavirus were found in blood taken from healthy volunteers in the country in October 2019 during a lung cancer screening trial.

COVID-19 was first identified in the central Chinese city of Wuhan in December 2019, while Italy’s first patient was detected on Feb. 21 last year in a small town near Milan.

Where, when and how the virus originated is one of the central mysteries of COVID-19, which has killed more than four million.

On Thursday, China rejected a World Health Organization (WHO) plan for a second phase of an investigation into the origins, which includes the hypothesis it could have escaped from a Chinese laboratory. In May, U.S. President Joe Biden ordered aides to find answers about the origin.

The Italian scientists from the VisMederi laboratory at the University of Siena and Milan Cancer Institute (INT) say their study revealed details about when the virus started spreading.

Their findings released in November showed 11.6% of 959 healthy volunteers enrolled in the cancer screening trial between September 2019 and March 2020 had signs of having already encountered SARS-CoV-2, most of them well before February.

Most of the volunteers were from Lombardy, the northern region around Milan, which was the first and hardest hit by the virus in Italy.

At the request of the WHO, the researchers had the samples retested earlier this year and asked the Erasmus University of Rotterdam to help with the review.

The scientists have now submitted the fresh findings called “Timeline of SARS-CoV-2 spread in Italy: results from an independent serological retesting” to the website bioRxiv, a free online archive of unpublished clinical studies, ahead of peer review.

They say these confirm their original conclusion.

But their Dutch counterparts say the results were not conclusive and they have not signed off on the latest study.

“Based on the criteria that we set, we could not confirm the majority of positives. Therefore, we had a different conclusion,” said Marion Koopmans at Erasmus University. She was one of the virologists on the WHO’s COVID-19 mission to China earlier this year.

The difference in findings centres on the criteria of the tests.

The focus of the re-test carried out by the two laboratories was the review of 29 biological samples from October-December 2019 that Italian researchers had found positive, 29 samples from the same period they had tested negative and 29 samples from as far back as 2018 that were also negative.

Out of the 87 samples reviewed, three were found by both laboratories to be positive for IgM. The first dated back to Oct. 10, 2019, in Lombardy.

But Erasmus’ criteria required all three coronavirus-linked antibodies – IgM, neutralising antibodies and IgG – to be identified, and none of the samples fulfilled that requirement.

Other samples had levels of IgM recognised by VisMederi but below the threshold set by Erasmus. The oldest dated back to Sept. 3, 2019, from the Veneto region.

Meanwhile, the INT researchers are also preparing a new paper on 25 studies carried out in Europe and North America on the start of the pandemic.

Last month, a study by the University of Kent in southern England placed the first case of COVID-19 in China in October 2019.