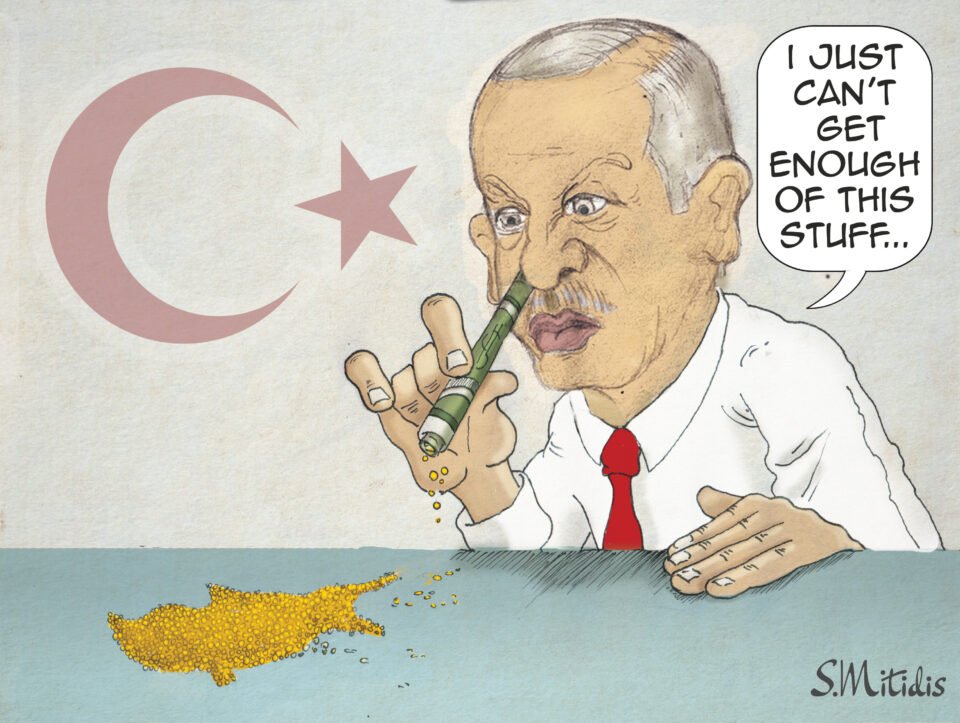 DÉJÀ VU. We appeared to have engaged in some time travel in the last week and returned to the eighties when high anxiety gripped the country over the wording or punctuation of some UN statement or resolution and we mobilised all our diplomatic weapons and our Soviet friends to prevent the Turkophile West, led by the perfidious Brits, from shafting us.

World affairs have changed since then but we returned to the UN for support, which experience has shown counts for nothing, after Turkey’s man in the north Ersin Tatar announced the opening of 3.5 per cent of the fenced-off area of Varosha, in the presence of his lord and master Erdo, and invited Greek Cypriots to apply to return to their properties.

The Turk-loving Brits, being the UN penholder on Kyproulla, behaved as they did in the eighties and drafted the statement of UN Security Council presidency that expressed concern about the announcement on Varosha without mentioning Turkey or the Turkish Cypriots. We were stabbed in the back, once again, but some friendly countries – Ireland, India and China – helped us out.

They expressed objections to the first draft and the second draft, while the Yanks reportedly also wanted a stronger statement so Britain backed down and a third draft that “condemns the announcement in Cyprus by Turkish and Turkish Cypriot leaders” was finally approved.

It was another diplomatic triumph, which by condemning Turkey by name ensured nobody in the world would think it was Kazakhstan that was opening Varosha.

THE REACTION was also eighties’ style with the CyBC playing nothing else, which was a small mercy as it drastically downplayed its Covid fearmongering. Suddenly, the wording of a UN statement posed a greater threat to our society than the unvaccinated.

Phil relived the Brit-bashing days of the eighties, with the front-page banner headline ‘British life-jacket for Turkey’ on Friday. On Saturday it reported that “London proved, yet again, the bad demon of the Cyprus issue” with “the games the British played in the UN with the aim of Turkey and Tatar not being accused and for a text that was tailor-made to Turkey’s agenda to be adopted.”

Peculiarly, Mother Russia did not come to our rescue this time, like the Soviet Union used to do back in the good old days. Russia, according to reports from New York, expressed no objection to the Brits’ unacceptable first and second drafts. The CyBC’s Trito presenter in conversation with the New York correspondent about this dismissed the lack of any objection from Russia because “Russia’s principled stand is a given.”

It gets worse. The Russian foreign ministry appeared to have taken a leaf out the book of our bad demon in its official announcement about Varosha, avoiding mentioning Turkey or the Turkish Cypriots by name and restricting itself to “expressing serious concern about” rather than condemning the “unacceptable, possibly, unilateral actions.”

TO SHOW the natives that it was pro-active and divert attention from another fine mess he and Prez Nik had landed us in our foreign minister called the ambassadors to brief them about the government’s stance. First Nikos Christodoulides briefed the ambassadors of the five permanent members of the Security Council and then those of the EU countries.

Christodoulides, accompanied by an entourage of minions, adopted a sad and sombre look and told EU ambassadors, in a rather dramatic tone, that this was the worst day for Cyprus after the invasion. He said the government would ask for the calling of an extraordinary European Council to discuss the Varosha move and then asked that each member-state condemn Turkey’s action separately rather than consider they were covered by the EU announcement.

He also warned that if we did not receive adequate EU support Kyproulla would not back any proposal for sanctions against third countries. Then he asked for questions, but there was silence, which had never happened before. No ambassador expressed support to the government either. Only the third in line of the French embassy (the ambassador had attended the meeting of the P5) got up to talk and give his government’s support. We can’t even blame the bad demon, who has departed the Union, for this lack of solidarity from our EU partners.

MEANWHILE our political leaders have embarked on a patriotic campaign to make any Famagustan contemplating applying to the immovable property commission feel guilt for betraying the national cause.

The national council scaled new heights of hypocrisy by saying the Varosha announcement “dealt a big blow to the prospects of the resumption of the talks for securing a comprehensive settlement based on the resolutions of the UN, international law…..” Prez Nik, Diko, Edek and Elam are suddenly crying because the talks for a settlement they do not want will not resume.

And while they respected the individual right to property and acknowledged nobody could prevent it being exercised “a prospective application to the so-called commission carries serious risks in relation to Turkey’s goals.” Famagustans who applied, in short, would help Turkey realise its goals. Haven’t our politicians already done that?

Retired Famagusta judge Giorgos Arestis in an emotional outburst on Trito also took the ‘trap’ line, telling his fellow townspeople that the Turks would not allow anyone to return but most probably offer compensation that was much lower than the value of the property – they might offer 100 grand for a property worth one million he said.

It did not cross his mind that the property if a Famagustan avoids falling into the Turkish trap and dutifully waits for a settlement is worth nothing.

WE SAW the police state in action when it arrested epidemiologist Dr Elpidoforos Soteriades on Monday not because he had taken part in the appalling violence at the Dias group’s palatial premises but for speaking at the Sunday demo outside the presidential palace and challenging the Covid truth-speak.

Soteriades, who has questioned Covid restrictions and the efficacy of vaccines, was released on Friday after being charged with illegal assembly, conspiracy to commit a misdemeanor and violating the quarantine law. Dissent is not permitted in a police state.

While a flood of statements were issued by parties and organisations to condemn the violence at the Dias offices as an attack on freedom of speech there was not a word of protest about a man being arrested for exercising his right to free speech. The only person to publicly protest against the arrest was the crackpot Bishop of Morphou whose support must have been an embarrassment to Dr Soteriades.

PREZ NIK was so moved by what had happened at Dias on Sunday he decided to pay a visit the next day to see the damage caused and underline his commitment to free speech. The state would not tolerate such actions and would not allow the media to be silenced, he trumpeted.

The highlight of the visit was the performance of the Dias supreme boss Zeus Hadjicostis, who menacingly waved his finger at Nik angrily telling him “this is your last chance to prove you exist,” presumably seeking action by the state.

Zeus was not wearing a face mask when he greeted the prez, who was. Have the police fined him or is Zeus exempt? If anything it should be a premium fine for putting the head of state, who is in the vulnerable category, at Covid risk.

MASTER of all forms of diplomacy and foreign minister Christodoulides appears to have added energy to his portfolio. On Friday he signed an MoU for cooperation in the oil and gas sector with Lebanon’s Defence Minister and Deputy Prime Minister Zeina Akar. Why hadn’t our Minister of Energy, Commerce and Industry Natasa Pilidou, who, as her title clearly states, has the energy portfolio, signed the MoU? Has Christodoulides decided to anoint himself Minister of Everything that Generates Positive Personal Publicity?

WHENEVER presidential elections approach the name of lawyer Marios Eliades is heard as a potential candidate. Although it is always heard, he has never been a candidate. Speaking to a friend, recently, Eliades told him that he hoped to stand in 2023. When his friend told him that he would be too old by the then, the wrong side of 75, Eliades replied, dead seriously: “I will be the Joe Biden of Cyprus.”

ON TUESDAY morning, on the way to work I decided to stop at my local greengrocer to buy a bunch of glistrida (sorry but I do not know the English name) to cut into my packed lunch of koucha (broad beans). At the door a man asked to see my SafePass. I got out my phone on which I had a scan of my vaccine certificate, but before I could press anything it went dead because it needed charging.

I decided to go back home to get the actual certificate because having koucha with glistrida was worth the inconvenience. I returned with the card and was allowed in but the glistrida was all gone. The moral of this Patroclos fable is if you want to buy glistrida always keep your vaccination card on you.