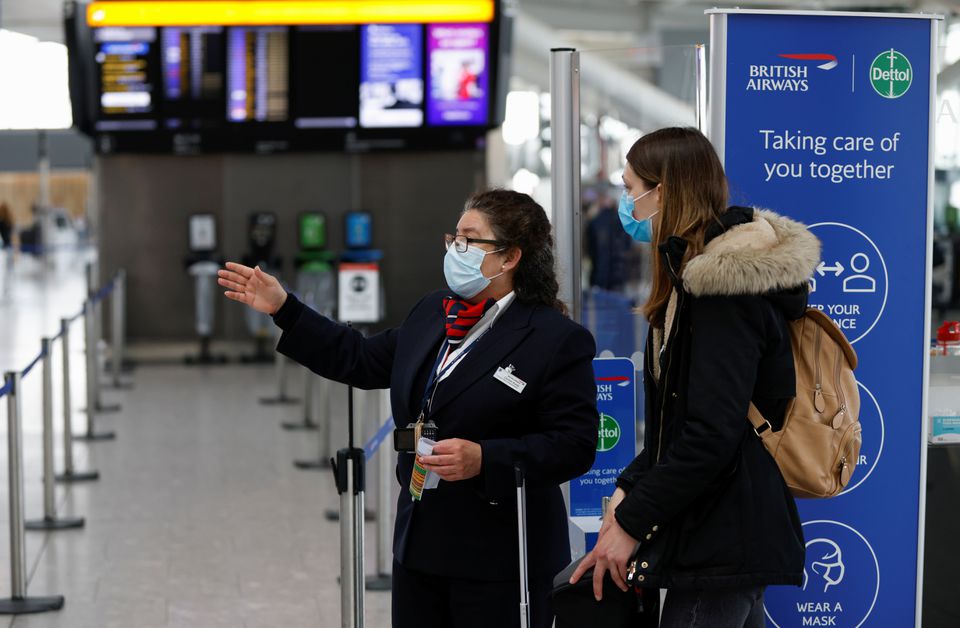 London’s Heathrow Airport urged Britain to open up travel to vaccinated passengers after its recovery fell behind hubs elsewhere in Europe, pushing its cumulative pandemic losses to $4 billion.

Heathrow, which before the pandemic was Europe’s busiest airport, said Britain’s travel restrictions were suppressing trade volumes and traveller demand, and government action was needed quickly or jobs would be lost.

Passenger levels at Heathrow were about 20-25 per cent of their pre-pandemic levels, while European airports are already back to about 50 per cent, said Heathrow Chief Executive John Holland-Kaye.

“Without the passenger planes going to global markets like the US, UK exports aren’t getting out of the country, and the UK will fall behind and that will cost jobs, unless we open up,” he told Reuters on Monday.

Heathrow wants Britain to allow fully vaccinated people from the United States and the European Union to be able to travel into Britain without needing to quarantine for 10 days, and says that level of opening up would help fuel a stronger recovery.

“Europeans have already opened up unilaterally with the United States, and got the benefits of doing it. There’s no reason why the UK shouldn’t do the same,” he said, adding he believed it could happen as soon as this week.

For the whole of 2021, Heathrow forecast 21.5 million passengers would travel through its terminals, a big jump from 4 million in the first six months of the year as restrictions ease and travel demand grows, but a long way off the 81 million who used its facilities in 2019.

Holland-Kaye said he was encouraged by a recent pickup as school holidays started. Separately Ryanair (RYA.I) said it was seeing strong summer bookings.

Yet high levels of COVID-19 cases in the UK and the government’s track record of ultra-cautious rules for travel – and last-minute changes to quarantine requirements – mean uncertainty continues to plague the travel sector.

Heathrow said worries over bringing in new restrictions or other countries barring UK travellers, had pushed it to seek a waiver of its Heathrow Finance ICR covenant for 2021 to cover it in case passenger numbers significantly miss its 21 million forecast.

For the six months to June 30, Heathrow posted an adjusted loss before tax of 787 million pounds ($1.1 billion), compared with a 471 million loss for the same period last year which was only half affected by the pandemic.