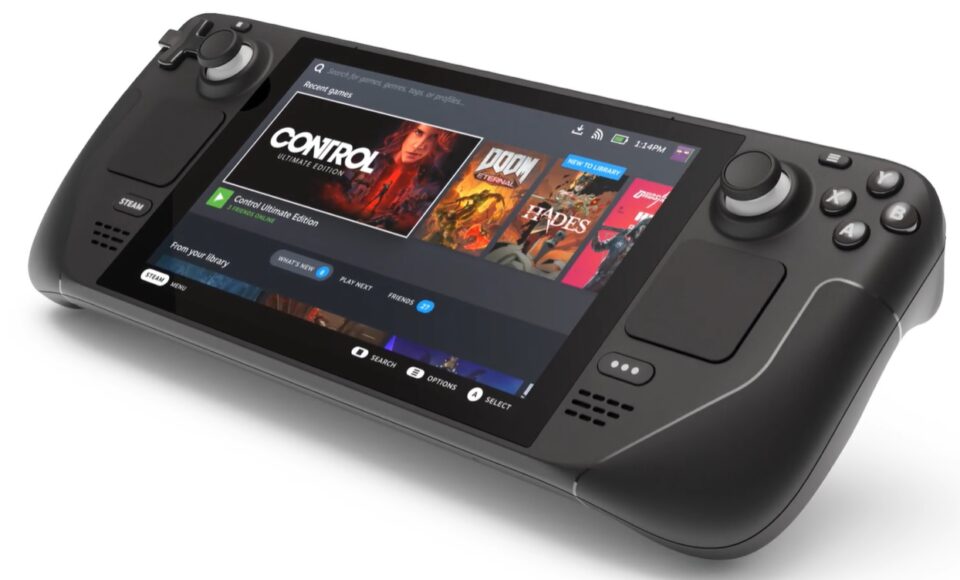 What exactly is Steam Deck? Think of it as something between a Nintendo Switch and an Xbox Series S, with the former being the current alpha in the mobile gaming sector and the latter being the entry-level console for next-generation gaming.

The Steam Deck comes in three different models and price points. Their key components are all the same but have a few hardware changes at each price point.

For consumers in Cyprus, the base model costs €419 and comes with a paltry 64GB of eMMC (short for embedded multimedia card) storage.

The middle-priced model, and one which will likely become the Steam Deck’s best-seller, costs €549 and comes with 256GB SSD drive and also includes an exclusive Steam Community profile bundle.

The top of the range version costs a whopping €679. That’s €179 more than the PlayStation 5’s recommended retail price, although mobile devices do tend to cost more than fixed ones.

The additional cost brings a 512GB SSD drive, an upgraded carrying case that’s different to the case included in the two previous models, an exclusive keyboard theme, the profile bundle included in the middle-priced model, and premium anti-glare etched glass.

The anti-glare glass is by far the biggest attraction here, especially if you want to use your Steam Deck outdoors and in a sunny place like Cyprus.

All models have a microSD slot for additional storage capacity, have Bluetooth connectivity, WiFi (no cellular version of the device will be on sale for the foreseeable future), a headphone jack, and one USB-C port with a DisplayPort.

In terms of graphics and processing power, the Steam Deck has an AMD Zen 2 processor with four cores, a CPU clock speed between 2.4–3.5GHz, and an AMD RDNA 2 GPU with 8 units with a 1–1.6GHz clock speed.

Regarding its availability, Valve is using a reservation system and will ship the devices as they are manufactured on a first-come-first-served basis. The first devices will start shipping in December of this year.

“We’re using a reservation system that we’re going to roll out shortly after this announcement and we’re really going to use that, [but] obviously can’t make all of the devices at once that we think people will want over the next year or two,” Valve’s Greg Coomer told IGN.

“So as those become available and as they’re manufactured, people will be able to reserve and then purchase those in a queue-based system,” Coomer added.

The Steam Deck was initially presented as having dual-channel RAM, but this was subsequently corrected by Valve to show that Steam Deck has quad-channel 32-bit LPDDR5 memory with speeds of up to 5,500MT/s.

“Valve’s handheld device is shaping up to be an exciting device, and following this correction it appears even more a well-considered one,” PC Gamer’s Jacob Ridley wrote.

A few questions about the Steam Deck remain, however, and will not be conclusively resolved until the mobile console hits the market.

“This thing is truly large [so] the ergonomics need to work, the screen needs to deliver and the battery life has to be decent,” the Digital Foundry’s Richard Leadbetter wrote, explaining that functionality is a crucial aspect to Steam Deck’s success.

“If Valve is talking about accessing your Steam library, that needs to just work – and that’s where the apparently vast improvement in the Proton compatibility layer really needs to deliver,” he added, detailing how compatibility and how that is affected by Valve’s improvements of existing technology which allows a Linux-based system to reinterpret Windows code.

Leadbetter also brought up a key question about the Steam Deck’s performance and how that will hold up in the future, especially given how games are becoming increasingly demanding.

“The fundamentals are there to ensure that games run – but how well are they going to run?” Leadbetter asked.

“We are in a time of cross-gen transition in the industry: if the titles of today run fine, what about the games of tomorrow?” he added.