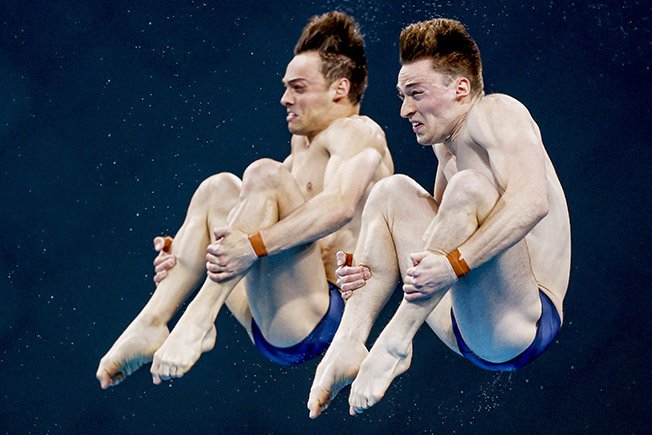 Japan mined more gold on Monday as sentiment towards the pandemic-delayed Tokyo Olympics appeared to shift, and local fans defied organisers to grab a glimpse of the Games.

In a shock at the aquatics centre Britain’s four-time Olympian Tom Daley and new diving partner Matty Lee pulled off a stunning victory in the men’s 10 metre synchronised platform to end China’s golden run in the event.

Chinese divers had triumphed at the last four Olympics.

Some locals defied organisers and gathered along the route of the triathlon, grabbing a rare opportunity to see live competition at the pandemic-hit Games.

“I think the risk of getting infected is extremely low, almost equal to zero,” said Masao Kitada, a 35-year-old finance worker standing at the roadside. “The Tokyo Games are very special, so I can’t miss this chance.”

Norwegian Kristian Blummenfelt took gold at the open air triathlon route on the island of Odaiba in Tokyo Bay.

Support for Japanese Prime Minister Yoshihide Suga slid nine points to 34%, its lowest since he took office, a survey showed on Monday, as worries about COVID-19 clouded his hopes the Tokyo Olympics would boost his ratings ahead of an election this year.

But Japanese media was full of Olympic success.

The Yomiuri Shimbun broadsheet, one of the world’s largest newspapers by circulation, splashed photos of judo gold medal winning Abe siblings, swimmer Yui Ohashi and skateboarder Yuto Horigome with the word “Gold” beneath each of their names.

Schoolgirl skateboarder Nishiya is sure to lead bulletins and adorn front pages now.

“I welled up in tears because I was beyond happy,” Nishiya said, describing the moment when she realised she had won gold.

Her victory put Japan atop the medals table with six golds, along with China and the United States.

Naomi Osaka looked good to add to the local haul later in the Games when she sailed into the third round, sweeping past 50th-ranked Swiss Viktorija Golubic 6-3 6-2.

“Well you know, definitely it would mean a lot for me to win gold here but I know it’s a process,” she said.

Extradition process for man wanted by US to start September