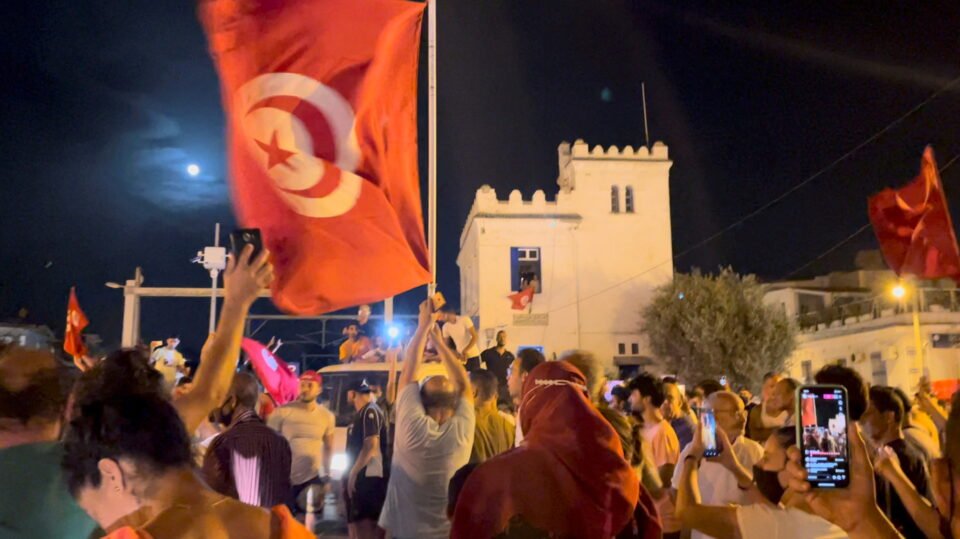 Crowds gather on the street after Tunisia's president suspended parliament, in La Marsa, near Tunis, Tunisia July 26, 2021, in this still image obtained from a social media video. Layli Foroudi/via REUTERS THIS IMAGE HAS BEEN SUPPLIED BY A THIRD PARTY. MANDATORY CREDIT. NO RESALES. NO ARCHIVES

Tunisia faced its biggest crisis in a decade of democracy on Monday after President Kais Saied ousted the government and froze the activities of parliament, a move his foes labelled a coup that should be opposed on the street.

In a statement late on Sunday, Saied invoked the constitution to dismiss Prime Minister Hichem Mechichi and decree a freeze of the parliament for a period of 30 days, saying he would govern alongside a new premier.

The move came after a day of protests against the government and the biggest party in parliament, the moderate Islamist Ennahda, following a spike in COVID-19 cases and growing anger over chronic political dysfunction and economic malaise.

It poses the greatest challenge yet to Tunisia after its 2011 revolution that triggered the “Arab spring” and ousted an autocracy in favour of democratic rule, but which failed to deliver sound governance or prosperity.

In the hours after Saied’s announcement, huge crowds gathered in his support in Tunis and other cities, cheering, dancing and ululating while the military blocked off the parliament and state television station.

Parliament Speaker Rached Ghannouchi (L), the head of Ennahda, which has played a role in successive coalition governments, decried the moves as a coup and an assault on democracy.

In the early hours of Monday, Ghannouchi arrived at the parliament where he said he would call a session in defiance of Saied, but the army stationed outside the building stopped the 80-year-old former political exile from entering.

“I am against gathering all powers in the hands of one person,” he said outside the parliament building. He earlier called Tunisians to come onto the streets, as they had done on the day of the revolution in 2011, to oppose the move.

Dozens of Ennahda supporters faced off against Saied supporters near the parliament building, exchanging insults as the police held them apart, televised pictures afterwards showed.

Saied, a political independent who swept to office in 2019 after campaigning as the scourge of a corrupt, incompetent elite, rejected accusations that he had conducted a coup.

He said his actions were based on Article 80 of the constitution and framed them as a popular response to the economic and political paralysis that have mired Tunisia for years.

However, a special court required by the 2014 constitution to adjudicate such disputes between Tunisia‘s branches of state has never been established after years of wrangling over which judges to include, allowing rival interpretations of law.

Two of the other main parties in parliament, Heart of Tunisia and Karama, joined Ennahda in accusing Saied of a coup. Former president Moncef Marzouki who helped oversee the transition to democracy after the revolution said it could represent the start of a slope “into an even worse situation”.

Saied, in his statement announcing the dismissal of Mechichi and the freezing of parliament, said he had also suspended the legal immunity of parliament members and that he was taking control of the general prosecutor’s office.

He warned against any armed response to his actions. “Whoever shoots a bullet, the armed forces will respond with bullets,” said Saied, who has support from a wide array of Tunisians including both Islamists and leftists.

Crowds numbering in the tens of thousands backing the president stayed on the streets of Tunis and other cities, with some people setting off fireworks, for hours after his announcement as helicopters circled overhead.

“We have been relieved of them,” said Lamia Meftahi, a woman celebrating in central Tunis after Saied’s statement, speaking of the parliament and government. “This is the happiest moment since the revolution.”

The president and the parliament were both elected in separate popular votes in 2019, while Prime Minister Hichem Mechichi took office last summer, replacing another short-lived government.

Meanwhile the parliamentary election delivered a fragmented chamber in which no party held more than a quarter of seats.

The president has been enmeshed in political disputes with Mechichi for a year, as the country grapples with an economic crisis, a looming fiscal crunch and a flailing response to the pandemic.

Under the constitution, the president has direct responsibility only for foreign affairs and the military, but after a government debacle with walk-in vaccination centres last week, he told the army to take charge of the pandemic response.

Tunisia‘s soaring infection and death rates have added to public anger at the government as the country’s political parties bickered.

Meanwhile, Mechichi was attempting to negotiate a new loan with the International Monetary Fund (IMF) that was seen as crucial to averting a looming fiscal crisis as Tunisia struggles to finance its budget deficit and coming debt repayments.

Disputes over the economic reforms, seen as needed to secure the loan but which could hurt ordinary Tunisians by ending subsidies or cutting public sector jobs, had already brought the government close to collapse.

TIMELINE-The bumpy road since the revolution

* December 2010 – Vegetable seller Mohamed Bouazizi sets himself on fire after police confiscate his cart. His death and funeral spark protests over unemployment, corruption and repression.

* March 2012 – Growing polarisation emerges between Islamists and secularists, particularly over women’s rights, as Ennahda pledges to keep Islamic law out of the new constitution.

* December 2013 – Ennahdha cedes power after mass protests and a national dialogue, to be replaced by a technocratic government.

* January 2014 – Parliament approves a new constitution guaranteeing personal freedoms and rights for minorities, and splitting power between the president and prime minister.

* March 2015 – Islamic State attacks on the Bardo Museum in Tunis kill 22 people. In June a gunman kills 38 at a beach resort in Sousse.

The attacks devastate the vital tourism sector and are followed by a suicide bombing in November that kills 12 soldiers.

* March 2016 – The army turns the tide against the jihadist threat by defeating dozens of Islamic State fighters who rampage into a southern town from across the Libyan border.

* December 2017 – The economy approaches crisis point as the trade deficit soars and the currency slides.

* January 2020 – After months of failed attempts to form a government, Elyes Fakhfakh becomes prime minister but is forced out within months over a corruption scandal.

* August 2020 – Saied designates Hichem Mechichi as prime minister. He quickly falls out with the president and his fragile government lurches from crisis to crisis as it struggles to deal with the pandemic and the need for urgent reforms.

* January 2021 – A decade on from the revolution, new protests engulf Tunisian cities in response to accusations of police violence and after the pandemic devastates an already weak economy.

* July 2021 – Saied dismisses the government, freezes parliament and says he will rule alongside the new prime minister citing an emergency section of the constitution that is dismissed by Ennahda and others in parliament as a coup.