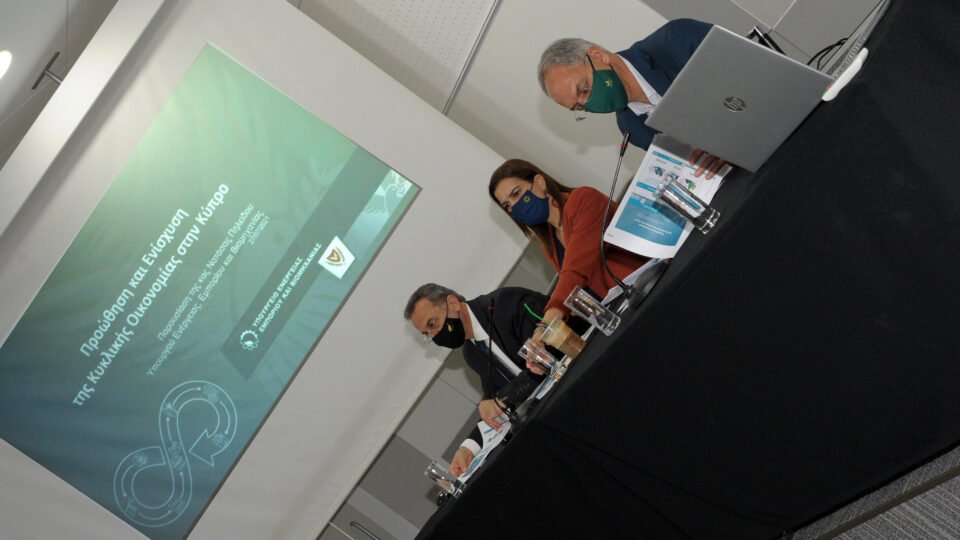 She, Agriculture Minister Costas Kadis and deputy minister for innovation Kyriakos Kokkinos presented a plan recently approved by the Council of Ministers.

The target is to shift from the current ‘dead end’ linear model which destroys natural resources, produces waste and contributes to climate change to a green, circular model that relies on renewable resources and recovers and reuses raw materials, thereby reducing wastage and keeping waste production at a minimum.

“Further than actively contributing to reversing climate change by reducing carbon emissions with the target of zero emissions in 2050, the good practices of the circular economy create opportunities to transform our businesses and industry so that they acquire competitive advantages to become more competitive and viable at a local and mainly at an international level,” she said.

A circular economy, like other green investments, creates new jobs and innovative new products, she added.

The plan is based on four pillars – information campaigns for businesses and consumers on the opportunities as well as on pay as you throw; incentives – including advice, Go Circular subsidy schemes and personnel training; infrastructure and fourthly managing municipal waste.

The latter includes €25m for pay as you throw, €3.5m for collection programmes and recycling green spots in remote communities, €7m for household composting of organic waste, €4m for repair and reuse centres, €5m for the reduction and separate collection of solid waste in Limassol and Paphos and €15m to use the separately collected waste.

Pilides added that her ministry will next year be unveiling a €13m incentives scheme for industries to invest in projects and practices to smooth the transition.

Speaking at the same press conference, Kadis said the ministry’s actions cover the projects on separate collection and management of municipal waste and the pay as you throw programme. Other projects planned for the period 2021 to 2026 include expanding the network of green points and setting up a coordinating body between the government and local authorities on waste management.

For his part, Kokkinos highlighted the importance of the green and digital transition as a national, European and world priority which must move forward together.

“The digital element is an integral part of our national plan to promote a circular economy,” he said.