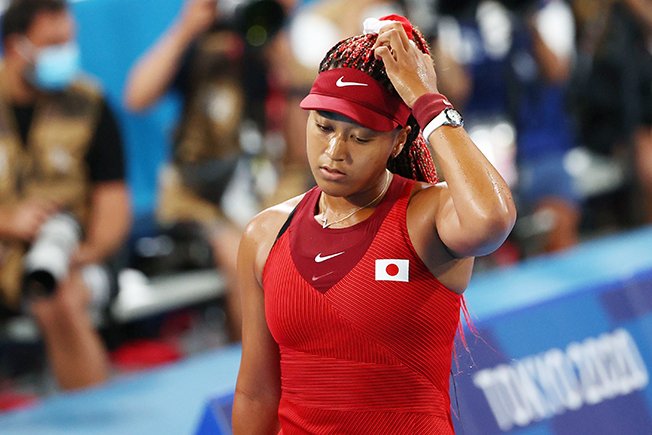 Wind and rain buffeted the Tokyo region on Tuesday causing delays to Olympic competition and event rescheduling, while tennis superstar Naomi Osaka exited the Games after she was beaten in the third round of the singles tournament.

Osaka, who lit the Olympic cauldron on Friday to open the Games, was swiped aside by Czech Marketa Vondrousova in a match where the Japanese player seemed out of sorts and never settled into a rhythm.

“I think it’s maybe because I haven’t played in an Olympics before and for the first one to be here was a bit much,” Osaka said.

The Tokyo Games marked Osaka’s first tournament since she pulled out of Roland Garros in May, saying she had been suffering from depression for almost three years.

The women’s tennis event has now lost both of its top draw cards after world number one Ash Barty was beaten in the first round.

Olympic organisers remained on alert to monitor the impact from a tropical storm off Japan’s east coast, while those competitors unaffected by the weather got Day Four of competition off to a flying start.

In the pool, Russian Evgeny Rylov broke a U.S. stranglehold on the men’s 100m backstroke, while Tom Dean powered to gold in the men’s 200m freestyle, heading a British one-two with Duncan Scott taking silver.

In Yokohama, just south of Tokyo, the sun emerged just after Canada beat Mexico https://www.reuters.com/lifestyle/sports/softball-canada-win-bronze-by-beating-mexico-3-2-2021-07-27 for the softball bronze, playing through a steady drizzle and strong gusts of wind. Technicians had removed the two dozen outdoor television monitors used to watch replays, and ushers handed out ponchos to media and officials in the spectator-less stadium.

At the archery venue, early rounds of the individual events were delayed by some two and a half hours due to the storm.

If the archers were left frustrated, though, the surfers were embracing the wet and windy conditions.

“Today is one of those days when it’s man against ocean, more so than competing against your competitor, but that’s what makes it fun,” Japanese surfer Kanoa Igarashi told reporters after scoring a spectacular early barrel wave en route to a quarter-final victory over American Kolohe Andino.

Japan’s hot, wet and unstable summer weather patterns https://www.reuters.com/lifestyle/sports/tokyo-braces-storm-snarls-schedules-after-withering-heat-2021-07-25 have been a persistent concern for the Games.

Tokyo was forecast to receive up 31.5mm (1.2 inches) of rain over 24 hours from tropical storm Nepartak, now forecast to make landfall in the north early on Wednesday, the Japan Meteorological Agency said.

In a sharp reminder that the Games were taking place under a continuing pandemic, Tokyo asked hospitals to prepare more beds for COVID-19 patients as the Olympic host city grapples with a rise in infections, broadcaster TBS said on Tuesday.

Daily infections in the city, which has seen an influx of overseas visitors for the Games, doubled to 1,429 on Monday from a week earlier.