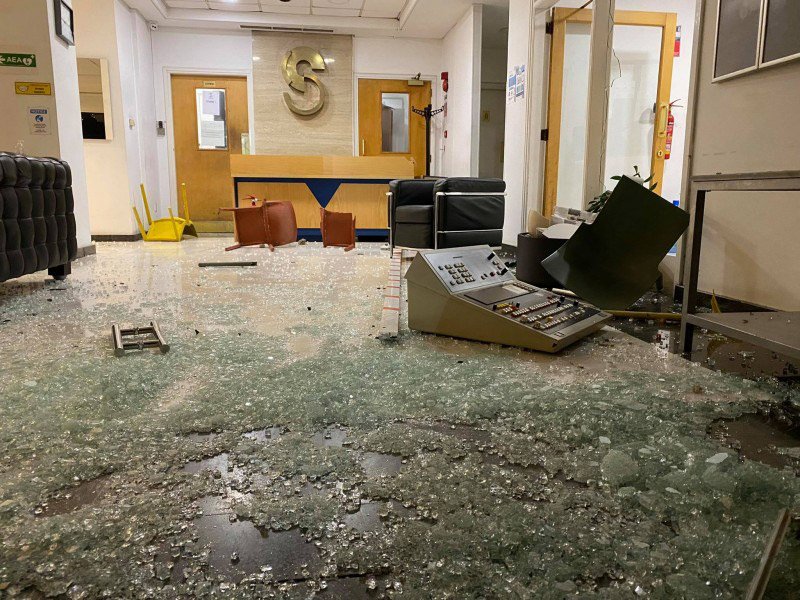 A Sigma office after the attack (Photo: Christos Theodorides)

Police arrested two more people on Tuesday, men aged 21 and 37, in connection with the attacks at the Dias offices and the presidential palace earlier this month.

This brings to a total of 25 people who have been arrested in connection with the case, nine of whom remain in police custody, while two more are being sought.

The incident in question took place following a protest against the SafePass outside the presidential palace on July 18.

A group that broke away from the protest made their way to the Dias publishing group building, which also houses Sigma TV, terrorising staff, trashing offices and setting fire to employee cars in the parking lot.

It later emerged that clashes had taken place outside the palace between protesters and police after the end of the demonstration.

Five people were arrested last Monday and remanded for four days, while another seven were remanded for eight days last Tuesday.

Four of the seven remanded were suspected of participating in Sunday’s events at Sigma, the other three in connection to the earlier gathering outside the presidential palace.

One of the people remanded was epidemiologist Elpidoforos Soteriades, who was later released alongside two others after being charged with illegal assembly, conspiracy to commit a misdemeanor, and violating the quarantine law. He was among those arrested on Monday and was given an eight-day remand.