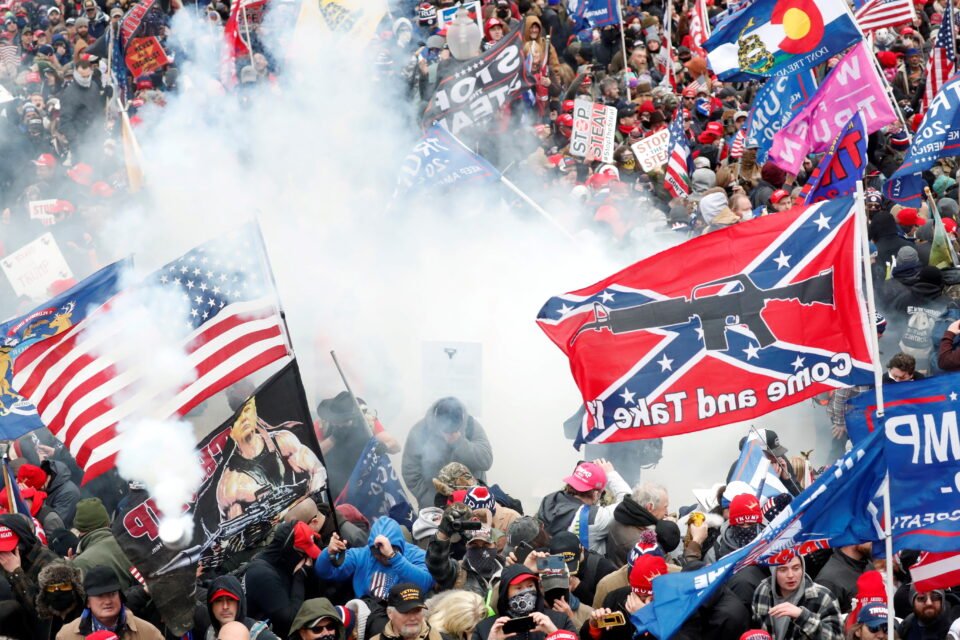 Tear gas is released into a crowd of protesters, with one wielding a Confederate battle flag that reads "Come and Take It," during clashes with Capitol police

The Jan 6 US Capitol attack by a mob of then-President Donald Trump’s supporters trying to overturn his election loss featured harrowing violence resembling a medieval battlefield, a police officer hurt in the melee told a congressional panel on Tuesday.

At the Democratic-led House of Representatives investigatory committee’s first hearing, the officer, Aquilino Gonell, described in prepared testimony being pummeled by rioters fired up by Trump’s false claims that the election was stolen from him through widespread voting fraud.

“What we were subjected to that day was like something from a medieval battlefield. We fought hand-to-hand and inch-by-inch to prevent an invasion of the Capitol by a violent mob intent on subverting our democratic process,” added Gonell, one of four police officers called to testify. “The physical violence we experienced was horrific and devastating.”

The nine-member panel was formed after Senate Republicans blocked the creation of an independent commission to investigate the attack. House Speaker Nancy Pelosi, a Democrat, named the committee’s members. Its chairman is Democrat Bennie Thompson.

Dunn, who is Black, said in prepared testimony that rioters called him a racial slur while he was trying to defend the Capitol after he challenged their claims that no one had voted for Biden by telling them that he himself was a Biden supporter.

Four people died on the day of the violence, including one rioter fatally shot by police and three others who died of natural causes. A Capitol police officer who had been attacked by protesters died the following day. Two police officers who took part in the defense of the Capitol later took their own lives. More than a hundred police officers were injured.

The riot followed Trump’s speech to supporters in which the Republican repeated his false claims about voting fraud. Pelosi has called the attack “an attempt to overthrow the government.”

Most House Republicans have fiercely opposed the creation of the committee, saying it is politically motivated by Democrats.

The committee includes two Republicans – Liz Cheney and Adam Kinzinger, both of whom have denounced Trump’s false statements about the election and voted with the Democrats in January to impeach him. Cheney was stripped of her position in the House Republican leadership over her criticism of Trump.

McCarthy, a Trump ally, has derided Cheney and Kinzinger as “Pelosi Republicans.”

“What we want to try to communicate during the hearing is what it was like to be on the front lines for these brave police officers, how vastly outnumbered they were, how well-militarized the members of the crowd were,” House Intelligence Committee Chairman Adam Schiff, a panel member, told reporters on Monday.

Fanone was pulled into the crowd of rioters, beaten, attacked with a Taser device and robbed of his badge, police radio and ammunition. As one rioter tried to pull his gun from its holster, Fanone could hear him saying he planned to take it and kill him.

More than 535 people face criminal charges arising from the riot including four charged in the attack on Fanone.