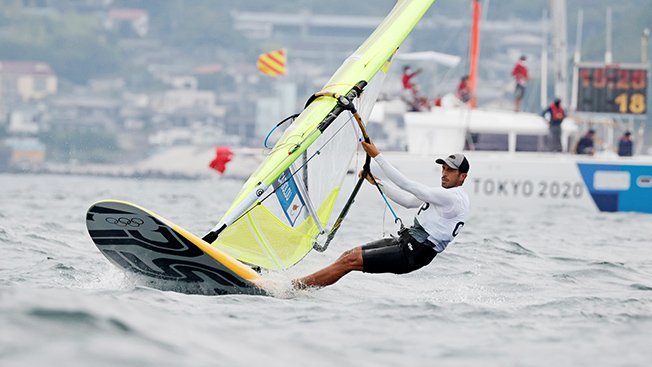 Andreas Cariolou of Cyprus in action on Wednesday

Cypriot athletes began to find their rhythm in the windsurfing competitions at the Tokyo Olympics on Wednesday to maintain their positions in the general classification.

According to the Cyprus Olympic Committee’s correspondent in Tokyo Argyris Argyrou, on Wednesday afternoon Andreas Cariolou remained in 14th place after a further three races.

After Tuesday’s rest day, Cariolou made sure he entered the third race of the day with two good placements in the competition’s seventh and eighth races (11th and 8th place), which saw him climb to 12th overall.

However, in Wednesday’s final race, despite a good start, Kariolou fell away after the third buoy and could only manage to finish 17th.

With a total of 91 penalty points, he fell back to 14th place, level with Greece’s Byron Kokkalanis.

He is 15 points away from the top ten.

Leading the competition is Dutchman Kiran Badlou with 26 penalty points, ahead of Italy’s Matia Kamponi with 34 points. In third is France’s Thomas Guard with 39 points.

In the women’s event, it seems that things are slowly taking shape, with participants divided into groups and occupying similar positions.

With three races to come before the medal race, there is a huge battle for the gold medal, with three women close together having broken away from the rest of their competitors.

After nine races, Britain’s Emma Wilson leads with 22 penalty points, in second is China’s Yunxiu Lu with 23 points and third is Frenchwoman Ciarlene Picon with 25 points.