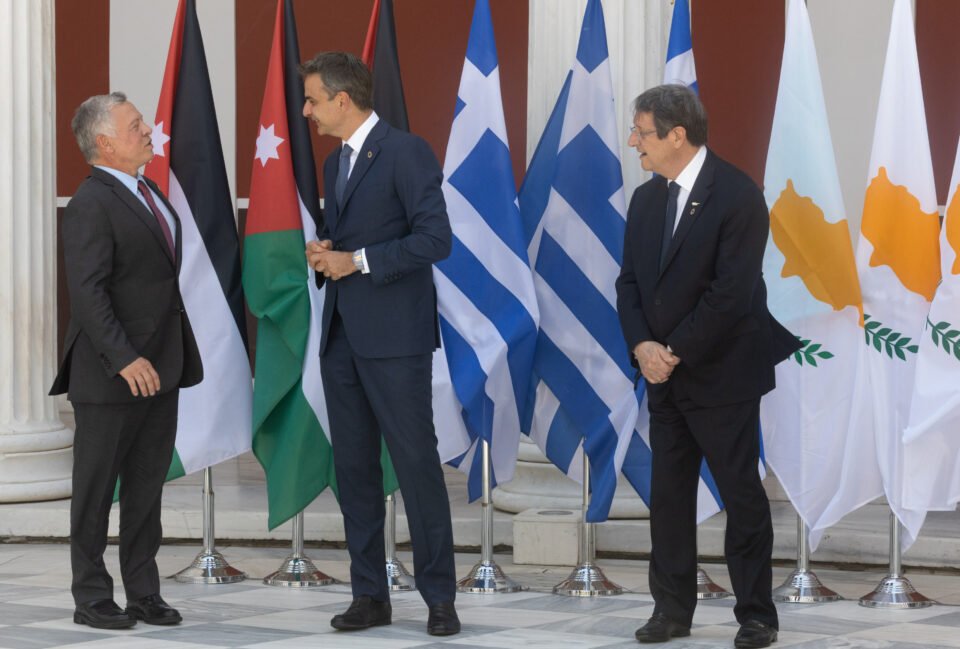 The further expansion and deepening of ties between Cyprus, Greece and Jordan were the focus of the trilateral meeting between the leaders of the three countries in Athens on Wednesday.

Greek Prime Minister Kyriakos Mitsotakis, King Abdullah II of Jordan and President Nicos Anastasiades issued a joint statement saying they had reviewed the significant progress made across the partnership during previous summits and ministerial meetings and agreed to explore further ways to leverage and deliver on their results.

In this context, they stressed the importance of the permanent secretariat being set up in Nicosia and its pivotal role in facilitating cooperation between the three countries.

The three leaders also expressed their common desire to promote and support existing synergies in all economic sectors and actively encourage new efforts, harnessing the dynamics of digital transformation of countries to overcome the challenges and difficulties posed by constraints due to Covid.

The joint statement also touched on the Cyprus issue and the situation on Varosha saying that “all unilateral measures or actions that are inconsistent with relevant UN resolutions and international law or undermine efforts for a peaceful solution through negotiations must be stopped”.

A peaceful, stable and prosperous Mediterranean was a strategic priority for the region, the joint statement said, calling on all countries in the region to respect the sovereignty and jurisdiction of each state over its maritime zones in accordance with international law, in particular the Law of the Sea.

“To this end, the leaders stressed the importance of engaging in a constructive dialogue and negotiation, in accordance with international law,” the statement said.

In his address at the start of the trilateral, Anastasiades praised the strategic partnership and said the event signified the deepening cooperation between the three nations in their shared goals, such as tackling terrorism and securing stability in the region.

“To this end, we look forward to re-launching sectoral meetings that were halted due to the pandemic, so as to proceed with concrete synergies,” he said.

The trilateral also discussed the EU–Jordan relationship during which, both Cyprus and Greece, pledged to continue advocating to push forward the EU–Jordan Partnership Priorities to promote common objectives and address shared challenges.