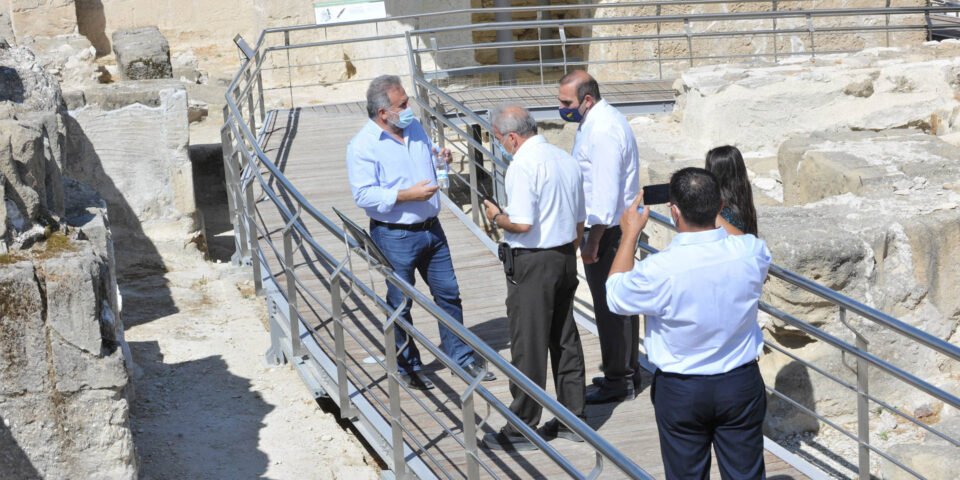 The Minister of Transport, Communications and Works, Yiannis Karousos, holds a press conference, in the presence of the Mayor of Idalion

Transport Minister Yiannis Karousos on Wednesday presented a €1.65m project to fund the construction of an archaeological park at the ancient administrative acropolis of Idalion, aiming to the promotion of cultural heritage as a means of local development.

Speaking after visiting the museum and archaeological site, Karousos announced the official completion of the 30-month project, which started in November 2017 and which was completed in July this year after its deadline was extended.

Collaborating bodies in the project included the department of antiquities which was the coordinator, the Nicosia development company, the Greek ministry of culture and the Lesvos’ antiquities authority.

According to the minister, the project promotes the development of alternative forms of tourism, based on rich local resources.

The bodies cooperated in this project to create, implement, and promote a common methodology for protection, management, and promotion of two archaeological sites, one in Cyprus and one in Lemnos, Karousos said.

The actions completed included the fencing of the archaeological site and the construction of two new shelters to protect sensitive areas in the basic excavated site, as well as the installation of guidelines and information signs and the creation of a digital application for smart devices, which will act as a guide for the archaeological site, said the Director of the Department of Antiquities Dr Marina Solomidou-Ieronymidou.

This would contribute to the goal of stimulating the local economy, through the increase of traffic at the sites, Karousos explained.

Thanking the local authorities for their collaboration, the minister highlighted the importance of collaboration between the central administration and the local government, which “can significantly contribute to the enhancement of local development”.

In his statements, the mayor of Dali, Leontios Kallenos expressed his satisfaction that the project promoted and preserved the history of ancient Idalion turning it to an “attractive destination”.

The project was funded 85 per cent by the European Union (from the European Regional Development Fund) and 15 per cent by national resources, under the Interreg V-A Cross-Border Cooperation Programme “Greece – Cyprus 2014-2020”.