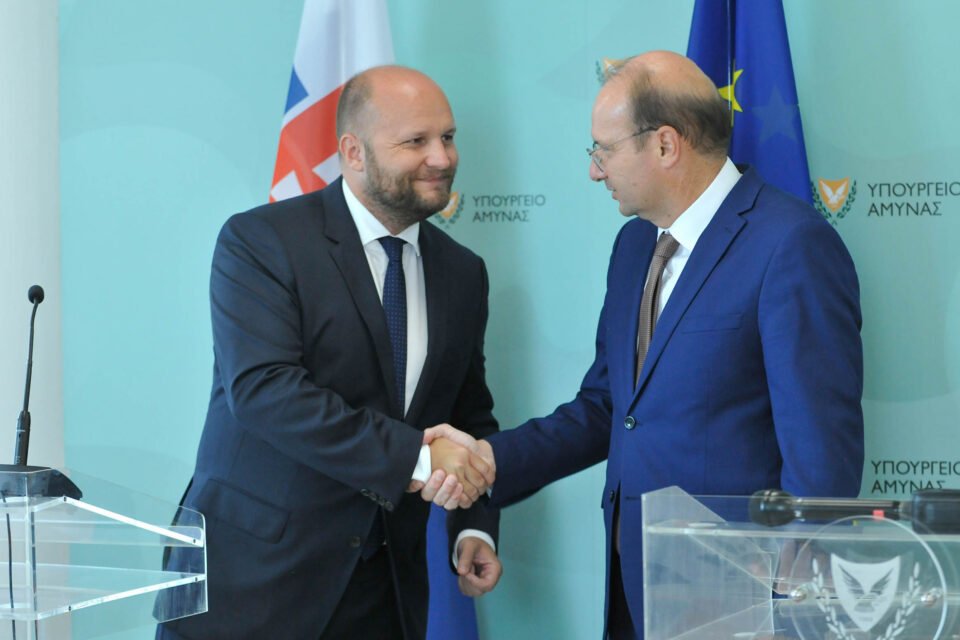 The ministers of defence of Cyprus and Slovakia met on Thursday in Nicosia to discuss
bilateral relations, the continuing tension in the Eastern Mediterranean region as well as the recent developments in Cyprus and the EU.

Defence Minister Charalambos Petrides and his Slovak counterpart Jaroslav Naď, also signed a Memorandum of Understanding which aims to establish general principles and procedures for the promotion of defence and military cooperation.

In statements after the signing ceremony, the Petrides expressed Nicosia`s appreciation for Slovakia`s invaluable contribution to the UN Peacekeeping Force in Cyprus, Unficyp, with a Slovak contingent stationed on the island for the past 20 years. He also noted that the bilateral ties between the two countries were at a very high level.

Petrides said that they also discussed Turkey`s provocations in the fenced off area of Varosha in Famagusta, as well as in Cyprus` Exclusive Economic Zone.

He recalled that both the UN Security Council in a presidential statement, and the EU through its High Representative had condemned Turkey`s provocations in Cyprus. He underlined that more effective measures must be taken by the international community, especially by the EU which can use the necessary tools to give Turkey a very clear message to cease its aggressive behaviour against Cyprus and respect international law.

In his statements, the Slovak Minister said that although his country has been contributing to the security of Cyprus for the past 20 years, which has fundamentally shaped the bilateral ties with the Republic of Cyprus, “we have so far missed out on a contractual basis – an agreement for fostering our excellent and smooth cooperation”.

“That being the case, I am convinced that with the signing of today`s Memorandum we will work towards a further desired intensification of the politico-military engagement between our two counties, which are both EU members,” he added.

He pointed out that the goal of the Memorandum was to “set the main principles and procedures for the delivery of our all-inclusive cooperation in the field of defence with the Republic of Cyprus”.

“This has already been underway today in the form of political talks and our joint participation in PESCO projects. Yet still, we can drive forward our cooperation in many other areas such as military exercises and armaments,” he concluded.