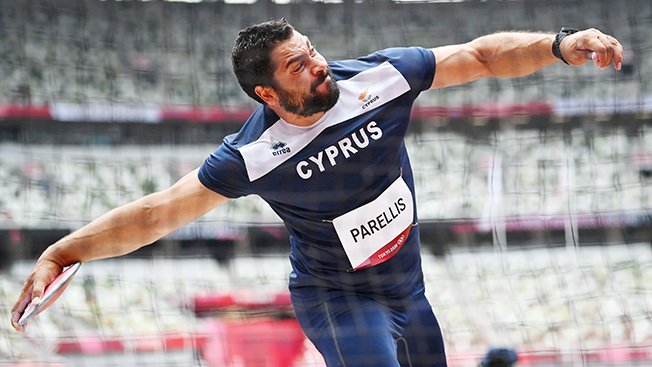 Apostolos Parellis of Cyprus in action in Tokyo on Friday

With a best throw of 62.11m, which is his best performance this year, Parellis will not continue his efforts in Tokyo, but was eliminated with pride.

Having finished eighth in Rio five years ago and fifth at the world championship in Doha, Parellis needed to throw 62.94m to qualify for the final

“With what I went through this year, I am happy that I was able to find myself in this great celebration and take part in the Games,” he said afterwards.

“I am happy with my effort, but not with the result, which leaves me a little disappointed, since if I was well I could have qualified for the final,” he said.

He added that, “an injury affects not only the point where you are in pain, but also the whole body, because in our sport the whole body must be properly combined in order to throw. Today I felt my legs did not help me and this is due to the absence from competitions and the lack of proper preparation due to the injury, which did not allow me to work properly. But it does not matter. This is how Games are. I could have done something more today, it did not work out for me and I am moving on to the next goal.”

The next target is the World Athletics Championship in Doha and the Munich European Championship.