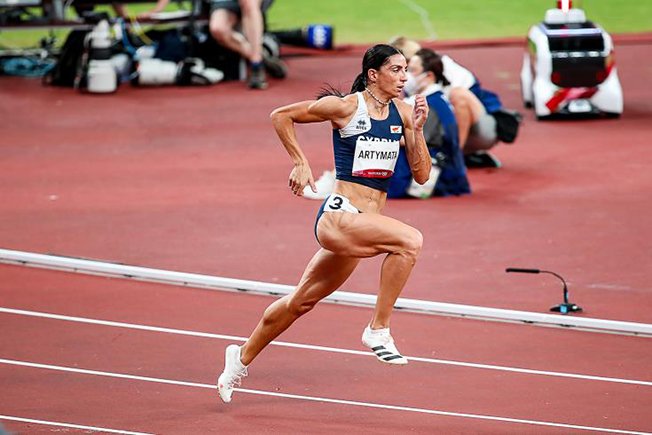 Eleni Artymata in action at the Tokyo Olympics on Wednesday

Cyprus track star Eleni Artymata missed out on qualifying for the women’s 400m final at the Tokyo Olympics on Wednesday despite setting a new Cypriot record in the event.

The 35-year-old Paralimni native, competing at her fourth Games, finished in fifth place in the first semi-final with a time of 50.80 seconds, breaking her own record of 51.14 from 2018.
The result saw her finish in 13th place out of 45 competitors.

The result though guarantees her a place at next year’s World Athletics Championship in Eugene, Oregon.

According to Argyris Argyrou of the Cyprus Olympic Committee, the first semi-final was really fast, with Artymata maintaining her rhythm and speed throughout the race.
All eight runners who qualified for Friday’s final ran under 50 seconds. Artymata was the third fastest European after Britain’s Jodie Williams (49.97) and Poland’s Natalia Kaczmarek (50.79).

“I entered the race with the aim of enjoying it and I felt that I would do it,” Artymata said afterwards.
“Since yesterday morning I was a little stressed, but I feel much better now!”

“My goal was to stay in the race right from the start and I think I did that. I realised at some point that they were going very fast because I was not getting as close to them as I should, but fine, I did what I could. I ran well, I stayed in the race until the end.
“In the beginning of the season I was out of strength before the end of the race.”

After competing in Beijing, London and Rio in the 200m, Artymata then stepped up to the 400m
“I am happy, because since I started running the 400m my big goal was to run under 51 seconds,”she added.

“I think it is a very demanding event. You must have maturity in the mind and listen to your body.

“In the last few years we have paid a lot of attention to training and my life in general, because the 400m has many requirements. Thank God I did not have any injuries to leave me behind, apart from some years when I had some misfortunes.”

Earlier on Tuesday, Cypriot 110m hurdler Milan Trajkovic failed to reach the final.
Trajkovic, who came seventh at Rio 2016, hit the ninth hurdle, lost his rhythm, hit the tenth hurdle and finished in a time 14.01 seconds, ranking him 23rd out of 40 competitors.

In a difficult year, with injuries that hampered his preparations for Tokyo, Trajkovic gave it his all, and leaves the Japanese capital with the promise that he will return to his previous high performances.

Speaking afterwards, he said: “This is how the hurdles are. I did not expect it to happen to me, but it happened.
“I felt good, better than yesterday, I had the belief that I could run close to 13.30 to get to the final.

“It was a tough race. The truth is that I cannot be unhappy, because I sat for two months in March and April, with two fractures… I do not know how I managed to run, to be healthy, to do two races quite good, two races fast enough, without feeling any discomfort in my body. That gives me courage to continue.

“Of course this is going to hurt, I will remember what happened here and I hope in time to come back strong. I feel very nice and proud of myself, that I managed to come through so many difficulties to reach the semi-finals of the Olympics”, he concluded.