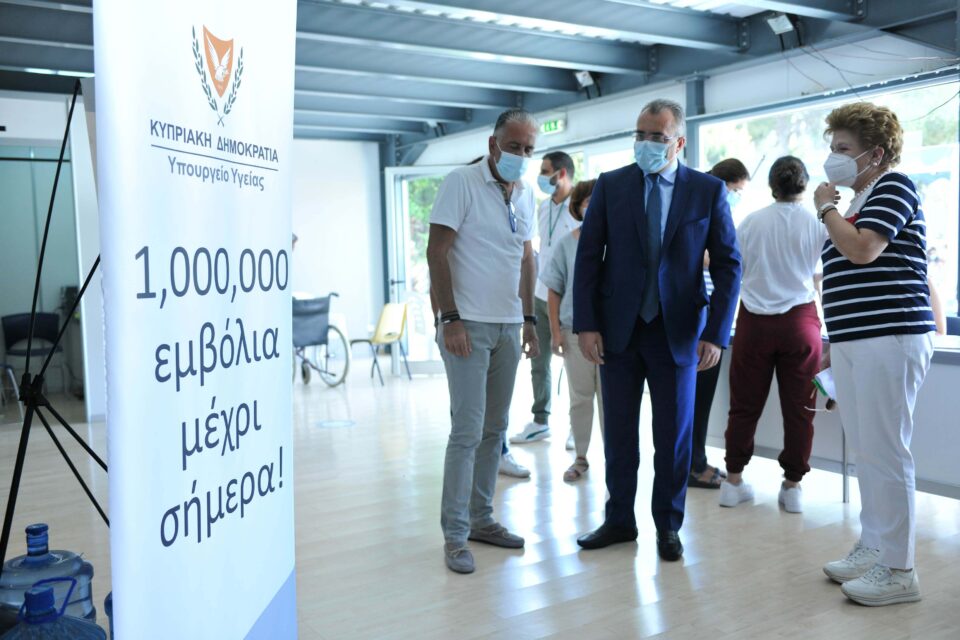 Health Minister Michalis Hadjipantelas said on Wednesday the administration of one million vaccine doses in Cyprus was a milestone in the battle against Covid-19 and expressed optimism that the target of 82 per cent first jabs by the end of August would be met.

Hadjipantelas visited the vaccination centre at the State Fair grounds on Wednesday morning along with ministry permanent secretary Christina Yiannaki and other officials.

The minister said the fact that one million doses had been given out means people trust the experts, the vaccination programme and the government.

“It gives the message that we will soon surpass the target of 82 per cent vaccinated,” he said.

Currently vaccinations with one dose has exceeded 74 per cent and fully vaccinated stands at more than 66 per cent.

With the increased flow in recent days, it is expected that by the end of August “we will reach 82 per cent with the first dose,” Hadjipantelas said.

Asked about the vaccination of health professionals who have not taken up the jab the minister said: “Doctors and nurses are like everyone else, they also have their peculiarities,” the minister said. “We have daily communication with them, and we believe that we will find solutions to this problem as well.”

Some months ago it was revealed that around 40 per cent of nurses and 25 per cent of doctors had not been vaccinated but the issue has not been referred to since.

Asked if the health system was able to meet the needs of all patients regardless of illness, the minister said that 228 non-Covid patients have been referred to the private sector and 27 to other intensive care units in that sector.

There was constant communication between the ministry and hospitals operator Okypy on the issue of beds, Yiannaki said.

“There is no one magic button that solves the problems immediately,” she said.

“But a gigantic effort is being made so that everyone can work together to open beds and also have availability in the private sector.”

Referring to unvaccinated patients, which the ministry says comprise around 88 per cent of admissions, Yiannaki said they should help themselves by getting the jab.

The minister, who was asked about the third possible dose of a vaccine, said that most EU countries said they would be going ahead with booster shots.

“We want to be ready when we get the green light from the European Union,” he said. “Once we are a member of the EU, we must abide by EU rules. When the EU gives us the green light, then we are ready.”