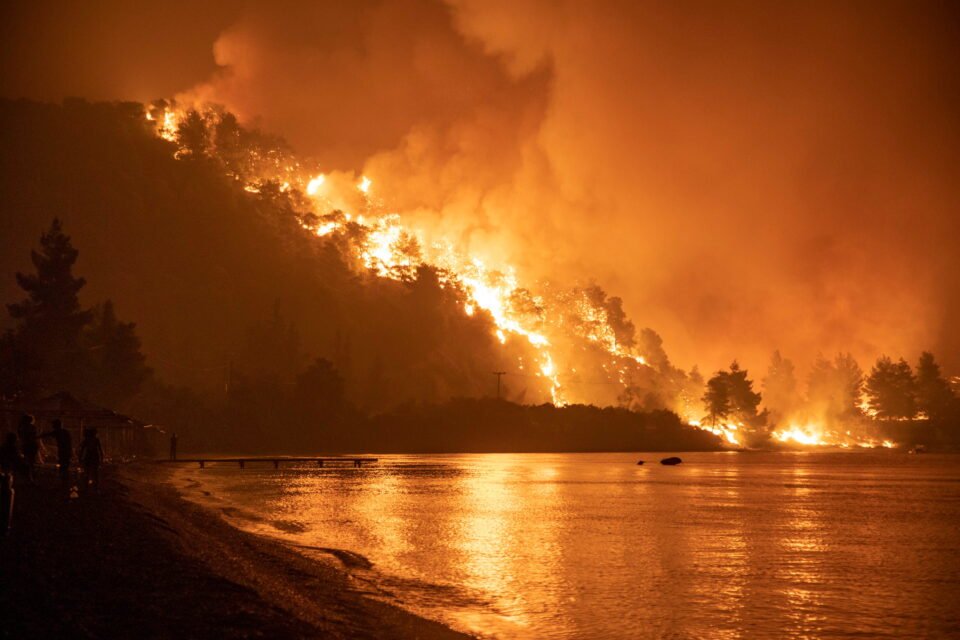 Flames rise as a wildfire burns in the village of Limni, on the island of Evia, Greece

By Stamos Prousalis and Costa Baltas

Flames swept through a town near Athens overnight and hundreds of people were evacuated by ferry from the island of Evia east of the capital as wildfires burned across Greece for a fifth day on Saturday.

The fire on Mount Parnitha on the outskirts of Athens has forced the evacuation of thousands of people since late Thursday, with emergency crews facing winds and high temperatures as they battled to contain it.

The flames appeared to die down by Saturday afternoon, but winds were forecast to strengthen, meaning there was still a high threat they would flare again.

“Under no circumstances can we be complacent,” Deputy Civil Protection Minister Nikos Hardalias said during an emergency briefing. “We are fighting a very big battle.”

Wildfires have erupted in many parts of the country amid Greece’s worst heatwave in more than 30 years, tearing through swathes of forestland, destroying homes and businesses and killing animals.

On Friday night, strong winds pushed the fire into the town of Thrakomakedones north of Athens, where it burned homes. Residents had been ordered to evacuate and there were no immediate reports of casualties.

The blaze left behind burnt and blackened houses and cars among scorched pine trees. A cloud of smoke hovered over the capital.

“(It’s) really bad,” said Thanasis Kaloudis, a resident of Thrakomakedones. “All of Greece has burned.”

More than 400 wildfires broke out across Greece in the last 24 hours, with the biggest fronts still burning in Evia and areas in the Peloponnese including Ancient Olympia, the site of the first Olympic Games.

Prime Minister Kyriakos Mitsotakis called it a “nightmarish summer”, adding the government’s priority “has been, first and foremost, to protect human lives”.

Neighbouring Turkey is also battling what President Tayyip Erdogan says have been the worst wildfires in its history and six fires were still burning in Turkey on Saturday.

Eight people have died in the fires that have ravaged Turkey’s Aegean and Mediterranean coastal regions for 11 days, burning tens of thousands of hectares and forcing thousands of residents and tourists to leave homes and hotels.

In Greece, more than 800 firefighters, including reinforcements from Cyprus, France and Israel, have been deployed to fight the blaze north of Athens, assisted by the army and water-bombing aircraft.

Hundreds of people, including many elderly residents, were evacuated by ferry late on Friday from the town of Limni on the island as the sky turned an apocalyptic red.

One man died in Athens on Friday after being injured by electricity pylon and at least nine others have been injured, authorities said.

The government planned to reimburse people affected by the fires and would designate the burned land as areas for reforestation, Mitsotakis said.

Residents in suburbs north of Athens have been forced to leave in a hurry with the few belongings they can take.

“Our business, our home, all of our property is there. I hope they don’t burn,” Yorgos Papaioannou, 26, said on Friday, sitting in a parking lot with his girlfriend as ash fell around them from the smoke-filled sky.

Thousands stolen after elderly woman tied up and robbed