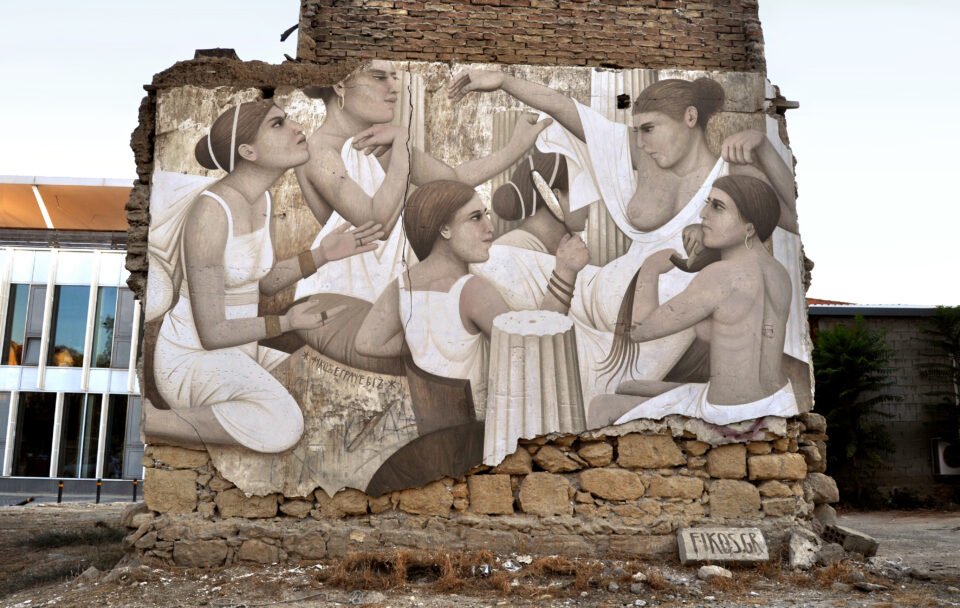 The Priestesses of Aphrodite in Nicosia

Fikos is halfway up a wall in Athens. “I’ve been working since 7am,” he explains, “and I’ll keep going late into the night, so it’s easier to call you from the scaffolding rather than go all the way down and back up.”

The 34-year-old Greek is a painter of walls – hence the heights. But this isn’t a whitewash job. Fikos is a world-renowned muralist, and he’s busy creating yet another huge work of art in the centre of Athens. “There’s a philosopher – Socrates in my mind,” he adds. “There are figures using laptops and books and smartphones… Anything to do with communication, because that’s the focus of the commission.”

An artist by trade, Fikos’ main body of work is canvas-based. He’s already participated in numerous group exhibitions, and has enjoyed four solo shows, in Athens, London, Turin and Limassol. But murals, he suggests, are quite possibly the more important part of his work, especially in terms of social impact.

“My relationship with the wall started in 1999, with graffiti,” the artist reveals. “I moved into street art, and at the same time started working on indoor murals in Greek Orthodox churches. Then, in 2011, I began creating outdoor murals inspired by Greek mythology…

“These myths are limitless and imaginative, providing countless themes to paint,” he explains. They’re also timeless – “I trust the message of these legends; if they’ve lived for two to three millennia, they must have something to say” – and enjoy a wide appeal. “Over the years of Western civilization’s cultural dominance, Greek myths have become international, and this allows my art to appeal to a global audience.”

While the heroes and villains of Greek myth are the subject, Fikos’ style is best described as ‘Greek-Byzantine’. “It’s fair for someone to think ‘Byzantine art is the art of Byzantium; it’s a dead art that belongs to the past’,” he says. “But to me, Byzantine painting is a malleable, visual language that can be still contemporary; that’s why, 10 years ago, I decided to call this style ‘Contemporary Byzantine Painting’, a term which has since been adopted by other artists.”

At a time when ‘contemporary’ art is often synonymous with ‘incomprehensible’, Fikos suggests, his style presents a viewer-friendly experience: a traditional art form that falls exactly between realism and abstraction. “Byzantine art presents what is known as ‘Reverse Perspective’,” he explains. “Which means the perspective comes forward towards the viewer, rather than disappearing into a vanishing point. In essence, the composition references the person who is actually looking at the work. Let’s not forget,” he notes, “that this Greek-Byzantine art has outlasted any number of other styles. Over the 2,000 years of its history – from the Hellenistic period to the end of the 18th century, this style has successfully expressed the views and thoughts of countless nations and populations.”

This popular appeal, he acknowledges, creates a certain responsibility for the artist. “I believe that these myths, as a collective legacy, provide a safety net as opposed to the artist’s personal views, which could be wrong, controversial or even disturbing to society. Until the birth of contemporary cities, public art was the norm,” he proposes. “But then, cities became filled with faceless buildings. They were ‘dried out’ by art – an art which became the sole purview of art historians, curators, gallerists and collectors. But with the rise of murals, this status quo has started to collapse. With murals, we’re creating what is essentially ‘art for the people’. Maybe that’s why people embrace it so warmly.”

Fikos’ art has certainly been well-received wherever he goes. In the course of his work, he’s visited over 30 countries, and spent countless hours creating publically-viewable art. “It begins,” he explains, “with days of research on the theme and history of the place. I look for a subject that will be pleasant to see; that will match the colour tones of its environs; and also be educational and informative.”

Then comes the actual creation of the mural. And this, he reveals, can be quite a challenge. “No matter your psychological or physical state – and I’ve worked in temperatures ranging from minus 7 to 40-plus! – you have to deliver a fine result in a limited amount of time. It’s common for me to work 14 to 16 hours per day; I once worked for 36 hours straight with just a two-hour break!

“The most challenging mural,” he discloses, “was the ‘Earth and Sky’ mural in Kiev. At 46 metres in height, it’s the largest mural in the history of Greek and Byzantine art. And also,” he adds, “one of my favourites, because it’s a bold statement that this tradition is still alive and evolving.”

Enjoyed by hundreds of thousands on a daily basis, Fikos’ vast creations adorn walls right across Europe, including Cyprus. “I’ve painted at least 10 murals on the island,” he divulges. “Not all of them are in public spaces though – some are located in Eldyk army camps and facilities; one is in the private offices of a company.”

But others are easily found. There’s the massive ‘Gorgo’ which takes up an entire wall of an apartment building on Nicosia’s Stasikratous. A thought-provoking ‘Tribute to Nicosia’ on a sandstone wall in Grammou street. The colourful ‘Onesilus and Amaracus’ in the Ermou neighbourhood of the capital. And ‘Pygmalion and Galateia’ on the side of a stone house in Paphos.

For the moment though, this talented muralist – next week he’ll be completing a 30-metre commission in Crete, before jetting off to Paris for another job – remains half-way up a wall in Athens. The job conditions may not be ideal, but that’s all part and parcel of creating art which, Fikos suggests, is less about the artist and more about the viewer. “My hopes are not for me but wider,” he concludes. “I hope that art will return somehow to more traditional values. Human history began with public art. With murals, we’re seeing a return of art for the people.”