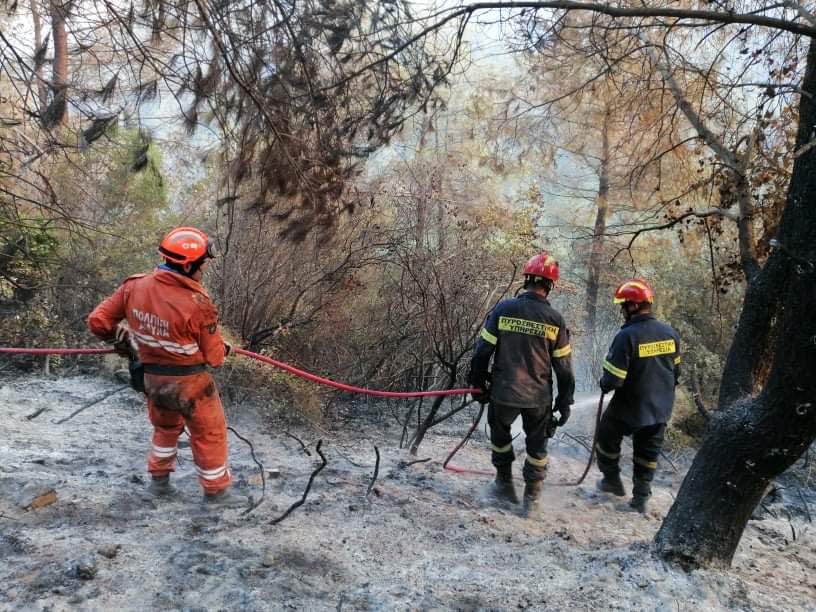 Four members of a Cypriot firefighting unit in Greece, including the one who was slightly injured on Tuesday, will return to the island after eight days, civil defence spokeswoman, Olivia Michaelidou said on Wednesday.

The group, which has been operating on the island of Evia, went back to Athens by boat, where they were expected to rest a while.

“The Cypriot mission will continue operating with the remaining 35 members, the two fire service trucks and the two forestry department aircraft,” Michaelidou said.

The unit mission remained in the area they had been deployed at on Tuesday morning, guarding against flare-ups.

“The wind had stopped at night allowed our members to move. The night passed without any problems or other injuries, although the danger was still present due to the darkness and dense vegetation. The area has now been secured and the fire is not spreading. The Cypriot mission did not operate on Wednesday.

The Cypriot firefighting mission was deployed on northern Evia on Tuesday, where huge fires raged. They worked in the communities of Galatsona and Avgaria and then they headed to Alkyoni, where they stayed all night. The team has been operating alongside Greek forces in various areas since last week to extinguish the devastating wildfires.

Chief of Larnaca’s civil defence and head of the Cypriot firefighting mission in Greece Chrysilios Chrysiliou talked to Cyprus Mail on Wednesday, describing his experience from the front lines of the massive disaster.

“The situation was unprecedented. Each fire is different in terms of its conditions or effects. The magnitude of the disaster was so huge mainly due to the expansion in residential areas, burning many houses. The number of fires was so great that it was impossible to have forces at every point. For example, in the fire in the Tatoi area, there was a resurgence even though the fire was initially dealt with,” he said.

The Cypriot firefighting mission was deployed to northern Evia on Tuesday, where huge fires raged. They operated in the communities of Istaia, Galatsona, and Avgaria and then they headed to Alkyoni, where they stayed all night.

“The mission on Tuesday was in an area near the small church of Panagia Ntinious, where the ground was inaccessible and the effort to put out the fire was even more difficult. Specifically, locals, commenting on the vegetation in the area, stated that “not even a wild pig can pass through”. Drought and the weather conditions also played an important role in the fire’s uncontrollability. I am not able to say to what extent this whole situation was created by illegal actions. This is something that will become clear in the coming days,” Chrysiliou said.

“The help of the local loggers was significant. We managed to reach the point of fire only when they opened a passage for us by cutting metre by metre. Citizens supported our effort to a large extent. Especially in Evia, the response was moving. However, many times, the presence of citizens made the work of the fire brigade difficult. You need specific training to cope with such conditions,” he added.

Commenting on the injuries of the two Cyprus mission members, Chrysiliou said the civil defence member who was injured last week was in good health. Tuesday’s incident with the Cypriot firefighter was a little more serious after he suffered a slight shin fracture.

“However, I must say, that they both insisted on staying on the front line, helping in any possible way,” Chrysiliou said.

“My assessment, without anything being certain is that the entire mission will return to Cyprus in the coming days. However, the picture is still unclear. The situation has certainly improved, but it is not ruled out that this may be reversed. Either way, the mission is ready to stay here if needed. We are proud to help Greece.”

He also described what most impacted him during the time in Greece saying that on Tuesday, when the team was operating around the church of Panagia Ntinious, he heard the church bell ringing and realised the village priest was inside praying with two other people for the fires to stop. “This was happening only 100 metres away from the flames and it gave the whole team the strength to continue,” said  Chrysiliou. “The unity we felt was moving.”