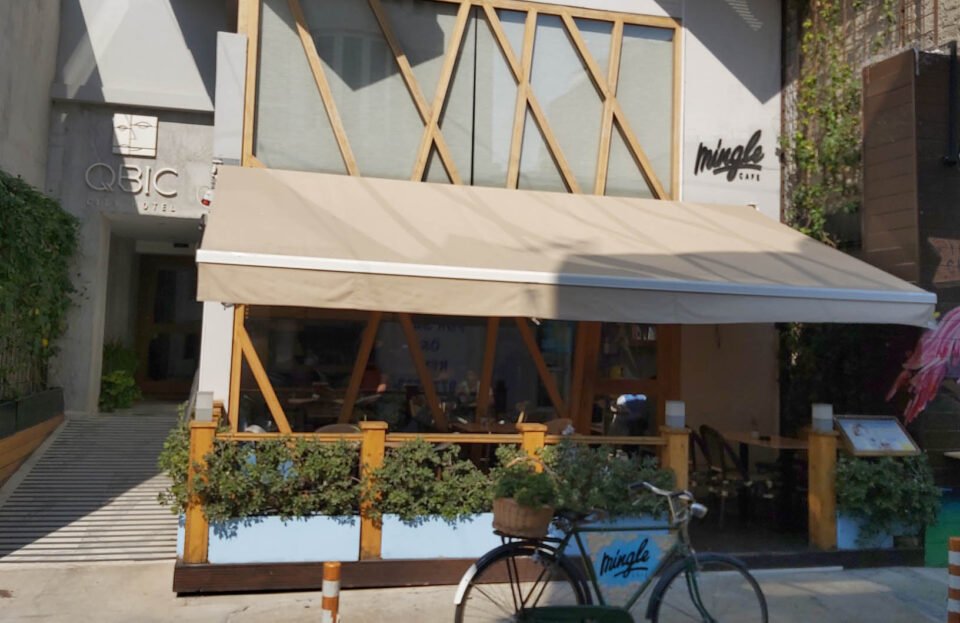 Larnaca’s modernisation has led to a raft of trendy new places opening over the last few years. One of the many is the Qbic hotel on Ermou. The hotel’s restaurant sits front and centre on the main road and is a prominent feature. Luckily, this means that the restaurant is open and accessible to the general public. By the entrance, you’ll see a delightful old bicycle that has a basket of flowers over the back wheel and a sign saying ‘Mingle’ hanging from the crossbar.

The normally busy street was very quiet and so was the restaurant. It was completely empty when we walked in, only the crowd of staff hanging around waiting for patrons. After having shown our SafePass, we were quickly ushered towards a table and a bottle of water was brought to us along with the menus. On each table there was a different, one word message spelt out in scrabble letters. Ours said ‘kopiaste’.

We were brought two menus, one of which was purely vegan. Although I am not vegan, I was very impressed. Apart from the obvious salad options were vegan burgers, brunch dishes, desserts and pancakes. I was tempted by some of the dishes from the ‘Salads and bowls’ section.

All the dishes were so beautifully described it made it difficult to choose. We all had more than one option in mind. I think it was the Black Angus and being curious about the andalouse sauce that made me opt for the Flamingle burger. The other orders were in and there was an order of Mediterranean bowl which is quinoa, vegetables, spinach, cherry tomatoes, roasted almonds, marinated beetroot, hummus spread, paprika, lemon, extra virgin olive oil. Another burger was ordered, the Hangover burger and lastly, a simple brunch dish that was described as having mushrooms, eggs, halloumi, bacon, olives and tomatoes. Sides had to be ordered separately and I opted for sweet potato chips for my burger and the other burger was ordered with a side of steak chips. Something that I’ve not seen before was the option of Taro chips (kolokassi) which intrigued me, but not enough to order them.

While waiting for our food, business started to pick up and soon all the tables were full! Soon enough, the food started to arrive. All of it very well presented. The burger was served on a wooden board and the top bun was slanted almost as if it was tipping its hat! The sweet potato chips were thinly sliced crisps and there were enough for two to three people. Needless to say, everyone tucked in to help me out!

The burger was very tasty. I fell in love with the andalouse sauce. The beetroot relish in my burger was subtle and the vegetables were fresh. The bacon was a nice thick slice and flavoursome. The only thing was that the combination of all these flavours took away from the flavour of the actual burger. I had to cut off a small piece to try it separately to experience the taste. The feedback I got about the other burger was positive but the same comment about the sweet bbq sauce being a little overpowering. Despite being very tasty, the burgers disintegrated while being eaten and ended up being a bit of a mess.

The brunch looked rather plain but everything was very well done. The only let down being that they had forgotten the mushrooms. The surprise package of the day was how good the Mediterranean bowl was. I tried some and was very impressed. The flavours combined together so well, the hummus was fantastic and the almonds gave it a lovely crunch. I’m a big fan of burgers and meat dishes in general but this Mediterranean bowl was so good I would go as far to say that it was the pick of the bunch from what was ordered.

Mingle is a fabulous place for brunch, lunch or dinner dishes and I highly recommend it. I may be back soon to have one of those Med bowls all to myself!

Sponge-like Canadian fossils may be earliest sign of animal life