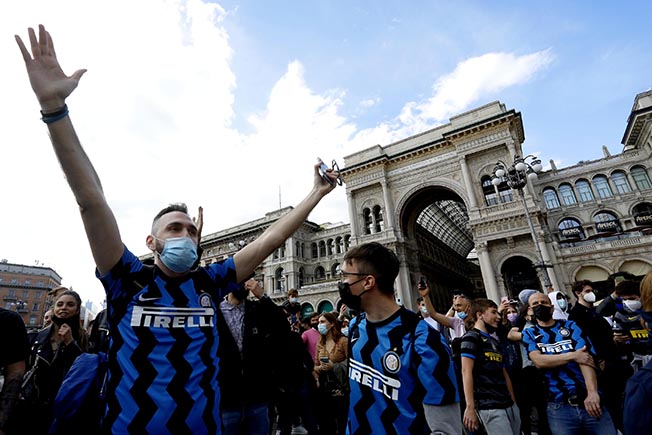 The honeymoon period did not last long for Inter Milan.

In May, Milan was awash with fans waving flags and singing songs outside the city’s iconic Duomo (cathedral) to celebrate the club’s first Serie A title in 11 years.

The financial problems facing owners Suning were by no means a secret at that stage, but few anticipated the situation that Inter are now in.

With one week to go until their title defence begins, the club have lost coach Antonio Conte, star wing back Achraf Hakimi and now, most painfully of all, top scorer Romelu Lukaku.

Between them, Hakimi and Lukaku were responsible for 31 goals and 20 assists in Serie A last season.

Their loss, combined with that of the architect of their success in Conte, has resulted in a tense atmosphere ahead of the new campaign.

Inter supporters made their presence felt during a friendly win over Parma on Sunday, with banners aimed at club president Steven Zhang.

“Zhang, the time is over” read one. Another, “Zhang, if you want to save Inter, you must go”.

Angry fans waved bank notes in the air. Others defaced a Lukaku mural outside San Siro. It has been a remarkable change in mood from those euphoric scenes of early May.

There were warning signs before Inter clinched the title.

In May, Inter CEO Giuseppe Marotta said the club was looking for a partner to inject fresh resources, and they eventually secured 275 million euros ($323 million) worth of financing from Oaktree Capital Management.

Then there was the playing squad. Marotta said in May that the “the main objective is to reduce costs, therefore also wages” after Inter players and staff refused a plea from Zhang to give up two months’ salary.

It was not long before the first domino fell.

On May 26, Conte’s contract was terminated one year early, three days after the end of a triumphant league campaign.

The coach was understood to be unhappy with plans to reduce costs by 15-20% and make a net transfer profit in the summer market of 70-80 million euros.

Simone Inzaghi was brought in from Lazio to replace him, but three days later Hakimi was sold to Paris St Germain for 60 million euros.

“I knew about Hakimi and have been told the other important players will stay,” Inzaghi said. Sadly for the new boss, that was not the case.

While Hakimi’s sale may have been accepted as a necessary sacrifice by many fans, cashing in on Lukaku was another matter entirely.

The Belgian became a club talisman during a sensational two-year spell in Milan.

When he and Conte arrived, Inter had just finished fourth, 21 points behind champions Juventus. Within a year, they cut that gap to one point and came second.

A year later, the title was theirs, with Lukaku’s 24 goals and 10 assists playing a huge part in that success.

In June, Lukaku responded to transfer speculation by saying: “I am staying. I feel good at Inter.”

He was not angling for a move, but when Chelsea’s offer arrived, Inter’s cash-strapped owners could not resist.

It leaves the Nerazzurri in an awkward place ahead of the new campaign.

Fan protests may well continue, while on the transfer front, Lukaku’s expected replacement, 35-year-old Edin Dzeko, is not a long-term solution.

On May 23, Zhang said: “The hope is that this joy and positive energy will continue for 100 years.”