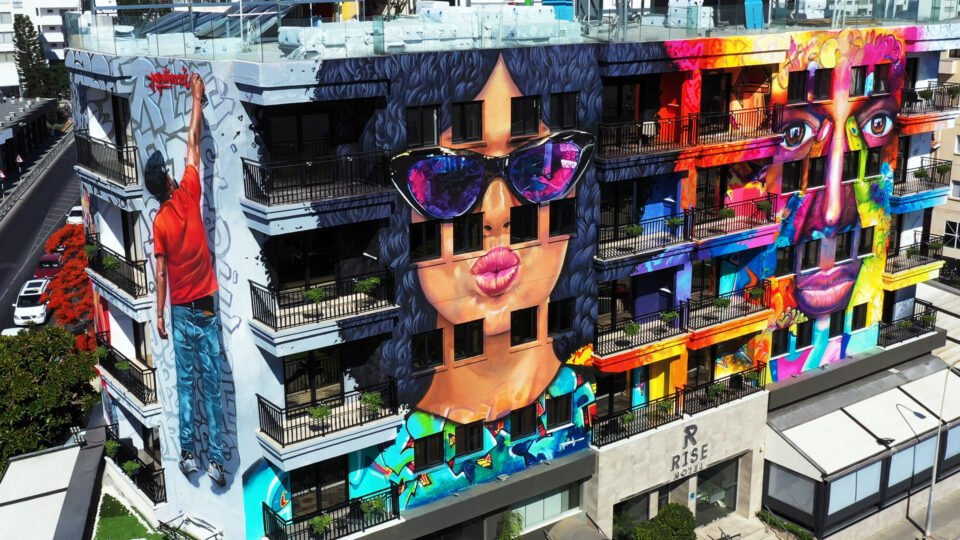 The exterior of the Rise hotel in Larnaca

Cyprus’ first graffiti hotel has become a reference point in Larnaca, an Instagrammable hub and a permanent exhibition showcasing the value of street art.

Walking in the Larnaca city centre, it is hard not to notice the former Rise Boutique Hotel, now Rise Graffiti Hotel, since its renovation in July. Previously one of countless grey, nondescript buildings, the luxury hotel has now been sprayed to the core with colour.

“We wanted the hotel to stand out, we wanted people to stop and look,” Marina Nasr, in charge of public relations at the Rise graffiti hotel, told the Sunday Mail.

Guests sitting at the bar of the hotel can verify that passers-by constantly stop to take a photo of the ‘jewel’ of the district, she said.

Part of the renovation plans was the idea of incorporating graffiti, an underappreciated street art which is commonly viewed as vandalism, explained Nasr.

“There is an incredible beauty in street art and it’s not as easy as people think, it combines different art elements and techniques … it was important to convey that.”

The artwork is not confined to the funky portraits and typography that cover the entire exterior of the building, but continues on the interior, including the whole reception area and the 42 guest rooms.

“Each room has a different character,” Nasr said, explaining that they mainly feature famous personalities such as Freddie Mercury, John Lennon and Marilyn Monroe. Others feature famous local landmarks and animals such as flamingos.

Some of the rooms are sort of interactive. “For example, in the Bruce Lee room, you can get a photo of you getting kicked in the face by Bruce Lee,” Nasr said.

A specially designated spot for people to take photos has also been set up on the right side of the lobby with real suitcases lining the wall and a painted girl that appears to be sitting on them.

“Even the pillows have original artwork on them,” Nasr said.

The uniform of the hotel’s staff also incorporates graffiti, while some of the staff are sporting artwork on their actual bodies since they are tattooed.

“We do not discriminate, we hire people based on their qualifications not what they look like,” Nasr said.

Six street artists collaborated for the project led by Achilleas Michaelides, aka Paparazzi, using photographs of everyday people and their artistic licence. The team included Alex Martines, who flew in from Greece to help, Yeti, a fine arts student in Athens, Pest, who recently moved to Cyprus from Zurich, Switzerland, Russian Andrey Zhokhov who is a visual artist in his 50s and Sasha Stylianou who used to live in South Africa.

“I paint real people, all the people that are being portrayed on exterior walls are people from Larnaca,” Paparazzi said.

The woman on the hotel’s façade who appears to be sending kisses to the public is a tourist who the artist altered by giving her black curly hair.

“I believe the road is not hate, it is mostly love and respect,” the 39-year-old street artist said.

Visitors who come to Cyprus and see the hotel “will leave but they will take a piece of Larnaca with them,” Paparazzi said.

Obsessed with graffiti since 1997, when he was a teenager, Paparazzi always enjoyed the freedom of leaving his signature on the streets in his own way.

“People stopped going to galleries, so when you paint in public you bring people closer to art.”

Paparazzi describes his technique as a marriage of fine art and graffiti, due to his background of taking afternoon art classes that proved to be too boring for the free-spirited artist. “I believe [street art] is a very authentic means of expression.”

However, he says that his influences are artists such as Valentin Serov, Johannes Vermeer, Rembrandt and Vincent van Gogh.

To paint the top floor, the team rented forklifts and despite Paparazzi’s minor fear of heights, he said that he just wore his headphones, listened to his favourite hip hop tracks and focused on his art.

“You can deal with your fears,” he said.

And it was worth the struggle, as upon the project’s completion, Paparazzi started receiving more invitations for works abroad.

The street artist is expected to fly to Poland by the end of the year to paint two five storey buildings in the historic centre of Krakow which is listed as a Unesco world heritage site as well as in Moscow for a similar project.

Not everyone appreciated the art however. Some have expressed their disapproval of the form of art used to the hotel in person and online.

“Everyone has their own opinion. It’s art- to each their own. But we love it,” Nasr said.

IPCC climate report: the language of the scientists