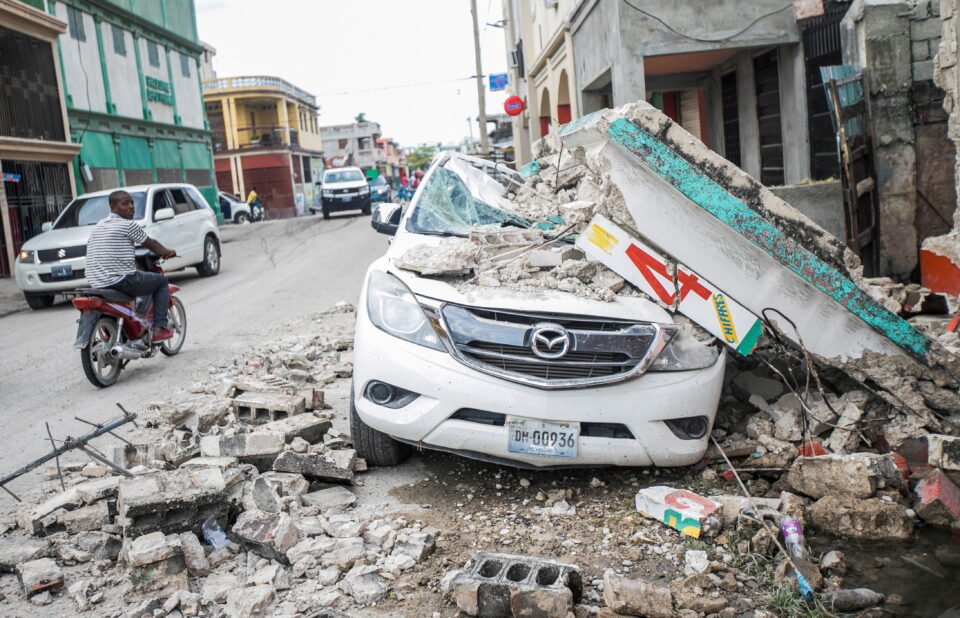 Doctors in Haiti battled on Monday in makeshift tents to save the lives of hundreds of injured people, including young children and the elderly outside hospitals overwhelmed by a major earthquake that killed at least 1,297 people.

Saturday’s 7.2 magnitude quake brought down thousands of homes and buildings in the deeply impoverished country, which is still recovering from another major temblor https://www.reuters.com/world/americas/haitians-quake-reawakens-trauma-disaster-decade-ago-2021-08-15 11 years ago and the assassination of its president, Jovenel Moise, last month.

The areas in and around the city of Les Cayes – some 150 km (93 miles) west of the Caribbean country’s capital Port-au-Prince – suffered the biggest hit, putting enormous strain on local hospitals, some of which were badly damaged by the quake.

Collapsed cement buildings lined the main street of the seafront city of 100,000 people, which risks further peril due the approach of a dangerous storm. Dozens of men dug out rubble from a collapsed hotel, where the owner died in the quake, according to residents.

The city’s general hospital was overwhelmed, with doctors and nurses attending patients in tents set up in its crowded parking lot because there was no more room inside.

Dozens lay on beds and mattresses on the grass outside the hospital. Inside, patients were on stretchers on the floor or on cots in crowded rooms with relatives by their sides.

Babies were being transported out of the hospital’s neonatal intensive care unit over concerns that the building was unsafe after the quake, according to a Reuters witness.

Dr. Lucette Gedeon, a pediatrician, had been volunteering at the makeshift neonatal ward since Saturday and said the hospital had run out of antibiotics and anesthetics.

“There have been babies that came in needing limbs amputated after they were trapped under the rubble,” Gedeon said.

Outside, Marceline Charles said her 1-month-old baby was hit by a brick when their house collapsed. The debris also cut a deep wound in the head of her 7-year-old daughter.

Nearby, Michelle Delva stood next to her sister, Claudine, cradling the injured woman’s infant. Delva said that when the earthquake struck, Claudine threw herself on top of her baby to save him from falling bricks. She broke her leg and needs an operation but they had been waiting outside since Saturday.

“She’s not getting the attention she needs, the doctors are so busy,” Delva said.

Prime Minister Ariel Henry said there was no time to lose.

“From this Monday, we will move faster. Aid provision is going to be accelerated,” he wrote on Twitter. “We will multiply efforts tenfold to reach as many victims as possible with aid.”

In addition to damage to some roads in the area from the earthquake, access to Les Cayes has been complicated by months of political turmoil in Haiti, which has left gangs in control of key access routes to parts of the country.

The United Nations called for a “humanitarian corridor” https://www.reuters.com/world/americas/un-calls-haiti-humanitarian-corridor-gang-held-areas-2021-08-15 to enable aid to pass through gang-held territories.

At Les Cayes airport, a steady stream of ambulances arrived, bringing the severely injured from nearby areas, a Reuters witness said. Casualties were carried on stretchers to small aircraft and a U.S. Coast Guard helicopter to be taken to Port-au-Prince, where hospital services were more intact.

Jeanette Pierre, whose cousin died in the earthquake, stood near the runway tarmac next to her 71-year-old father Pierre Ender, who was on an intravenous drip with bandages on his two broken legs, and her stepmother, who had one broken leg.

Both were caught under falling masonry when their house collapsed during the tremors.

“We went to the hospital with the other victims, but there weren’t enough doctors to attend to us,” said their daughter. “Now we’re hoping to get to Port-au-Prince for treatment.”

With the telephone network down in more remote areas and thousands injured, the death toll is expected to rise further, aid workers and officials said. In difficult-to-reach villages, many houses were fragile and built on slopes vulnerable to landslides, said Alix Percinthe of the ActionAid charity.

The disaster also threw into confusion plans to hold presidential elections in November to draw a line under the political confusion https://www.reuters.com/world/americas/one-month-after-haitian-president-slain-painful-confusion-prevails-2021-08-07 since Moise was assassinated on July 7.

Aid workers were hurrying to beat the arrival of Tropical Depression Grace, which early on Monday was moving west-northwest off the southern coast of Hispaniola, the island that Haiti shares with the neighboring Dominican Republic.

The U.S. National Hurricane Center (NHC) forecast Grace would pass right through areas directly hit by the quake, and could douse some areas with up to 15 inches (38 cm) of rain through Tuesday, risking flash flooding and mudslides.

Many Haitians who lost their homes have been sleeping outdoors, many traumatized by memories of a magnitude 7 quake https://www.reuters.com/world/americas/haitians-quake-reawakens-trauma-disaster-decade-ago-2021-08-15 11 years ago that struck far closer to Port-au-Prince, killing more than 200,000 people, according to the United Nations.

Thousands of people sleeping in the streets would be exposed to rains amid a rising risk of waterborne diseases, such as cholera, according to Jerry Chandler, head of Haiti’s Civil Protection Agency.

“We do have a serious issue,” Chandler said on Sunday.

He said boats and helicopters were being used to bring in aid, but the government was working to establish safe access by road. Initial supplies have made it through by land.

In Jeremie, to the northwest of Les Cayes, doctors were forced to treat injured patients on hospital stretchers underneath trees and on mattresses by the side of the road.

Churches, hotels and schools were also seriously damaged or ruined in the quake. Some 13,694 houses were destroyed, the civil protection agency said, and the toll could rise further.

In Les Cayes, rescuers in red hard hats and blue overalls pulled bodies from the tangled wreckage of one building, as a yellow mechanical excavator nearby helped to shift the rubble.