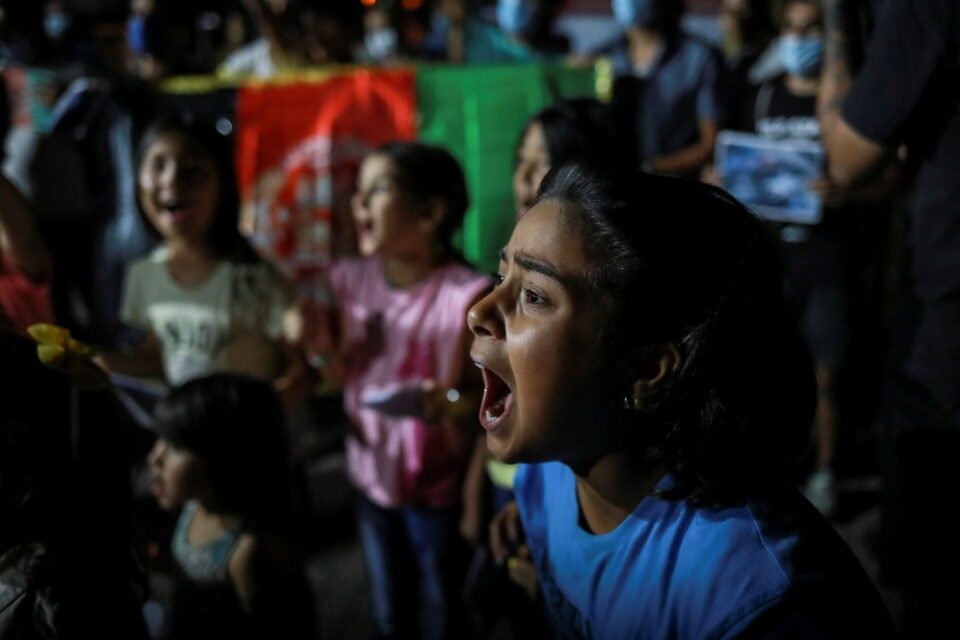 A demonstration of Afghan migrants against the Taliban takeover of Afghanistan, on the island of Lesbos, Greece, August 16, 2021. REUTERS/Elias Marcou

Elena, an Afghan asylum seeker who lives in a migrant camp on the Greek island of Lesbos, worries about friends and family back home after the Taliban’s swift moves to seize control of Afghanistan.

“It’s a disaster,” the 21-year-old, who declined to give her last name, told Reuters. “What will happen now in Afghanistan for (the) young generation? For children? For women’s rights? Everything is destroyed by the Taliban.”

Elena was one of around 500 Afghan asylum seekers and local activists taking part in a protest late on Monday, holding up a large Afghan flag and sitting near a banner that read: “We say no to Taliban.”

It took the Taliban just over a week to seize control of Afghanistan after a lightning sweep that ended in Kabul as government forces, trained for years and equipped by the United States and others, melted away.

The militants have sought to project a more moderate face, promising to respect women’s rights and protect people. But many Afghans fear the Taliban will return to the harsh practices of their 1996-2001 rule, when women were not allowed to work and punishments such as public stoning were administered.

On Lesbos, where there are about 2,500 Afghans – half the total number of migrants on the island, according to the Greek interior ministry – the protesters shared those fears.

Greece, and Lesbos in particular, has been at the frontline of migrant arrivals to the European Union for years. Authorities, who fear the arrival of a new wave of migrants with the victory of the Taliban, have pushed for a coordinated EU response.

But for Elena, the most pressing issue was the fate of those who stayed behind.

“Women cannot be educated. Women cannot go out from their house, they should stay in the house because they don’t feel safe. I have my friends in Afghanistan, they are panicked, they don’t know what they can do,” she said.

Meanwhile, Greek Migration Minister Notis Mitarachi said on Tuesday that Greece cannot become a gateway into the European Union for Afghans fleeing the escalating conflict in their homeland.

“We are clearly saying that we will not and cannot be the gateway for Europe for the refugees and migrants who could try to come to the European Union,” Mitarachi told state television ERT.

Greece was on the frontline of Europe’s migration crisis in 2015, when nearly a million people fleeing conflict in Syria, Iraq and Afghanistan landed on its islands before travelling north to wealthier European countries.