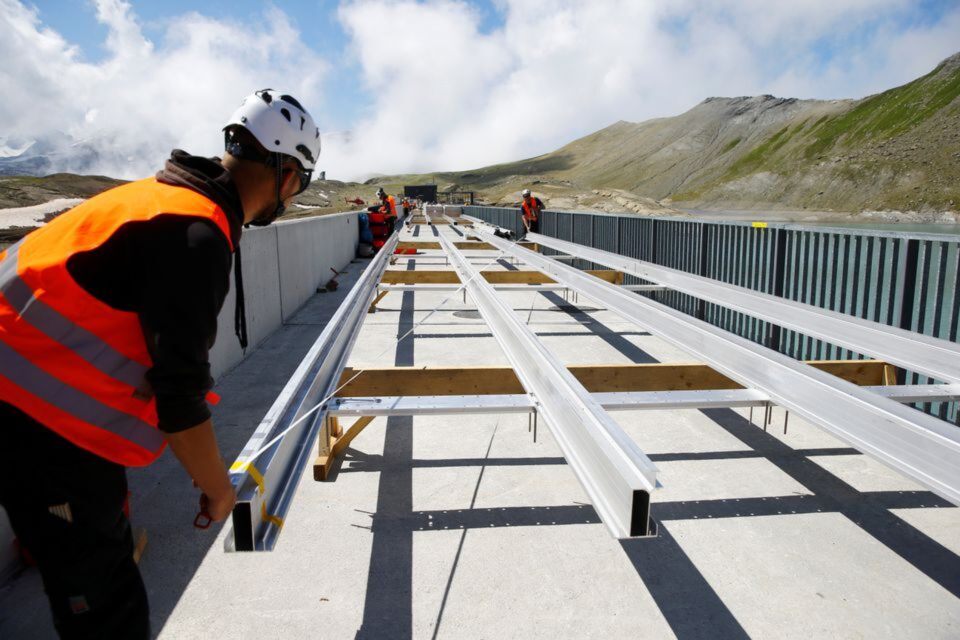 At a dam 2,500 metres (8,200 ft) high in the Alps, construction has begun on Switzerland’s largest alpine solar plant aimed at helping the small country secure renewable energy throughout the year.

Snags in relations with the European Union, from which it imports electricity especially in the colder months, also mean Switzerland must urgently increase production to meet its winter energy needs.

The 2.2 megawatt solar plant project, which developers Swiss energy group Axpo and partner IWB have said makes more environmental than financial sense, is part of Swiss plans to plug the gap left by the phase-out of nuclear energy while also aiming to reach net zero in greenhouse gas emissions by 2050.

“We have a boom mainly in solar (panel installations) for small houses but not much else here in Switzerland,” Christian Heierli, project leader at Axpo, told Reuters in an interview. “The idea (is) to have installations on other places as well, like here on a hydropower dam.”

When it is completed foreseeably by year-end, the Muttsee site will be the largest alpine solar plant in Switzerland, with nearly 5,000 solar modules producing around 3.3 million kilowatt hours of electricity per year.

Heierli did not disclose the size of investment in the plant.
Strategies to limit the impact of climate change have become divisive in Switzerland, where dry summers, heavy rains and snow-scarce winters are among the expected consequences of unchecked global warming.
Under the government’s “Energy Strategy 2050”, Switzerland plans to increase production of energy from renewables and hydro generation as it phases out nuclear energy, aiming to add 2 terawatts of greener electricity output by 2040.

But plans to curtail emissions have faced setbacks at the ballot box, with Swiss voters rejecting in June a trio of environmental proposals, including a new law intended to help the country meet its goal for cutting carbon emissions under the Paris Agreement on Climate Change.

he world’s shift towards greener transport through electric cars and other electrified systems will only increase demand, UBS noted in a study.

Nuclear power last year generated a third of Switzerland’s electricity, while solar-powered photovoltaics accounted for just 3.7 per cent of the electricity used.

With much of Switzerland’s potential for hydropower expansion already utilised and challenges facing near-term expansion of its wind and thermal energy, the country must focus on more large-scale solar projects, Heierli said.

The alpine location will let the Muttsee plant deliver half its production during the colder months of the year, when sunlight is generally in short supply in Switzerland. Solar plants at lower elevations produce only around a quarter of their electricity during this latter half of the year.

Solskjaer ignoring ‘one off’ 9-0 win ahead of Saints clash

Nicosia to host conference on rise of new urbanism confer