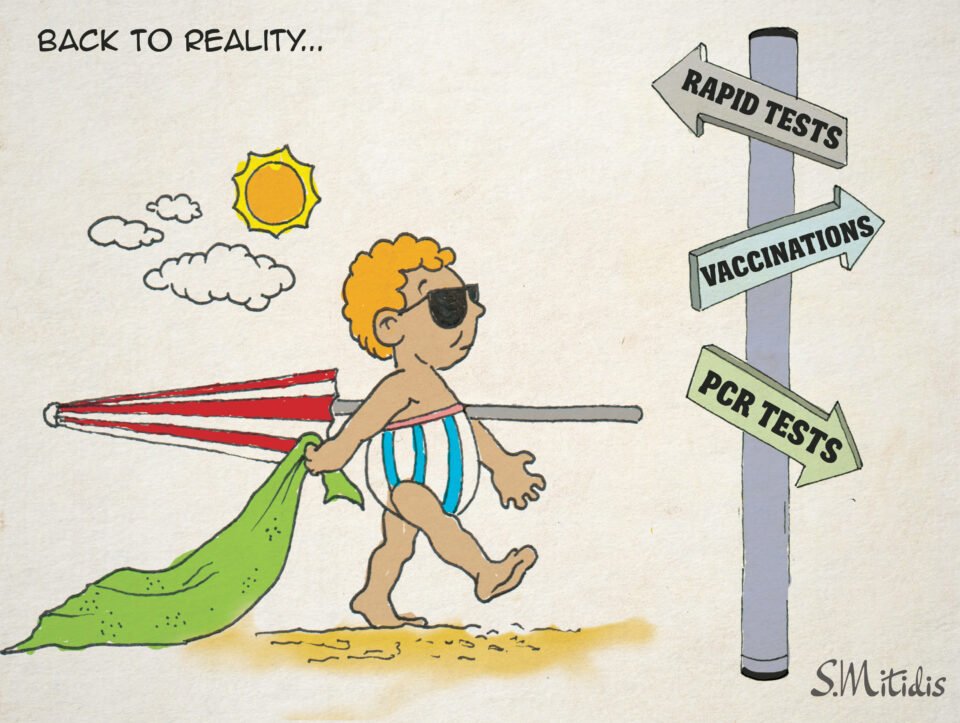 WARNING: if you are turned off by the Cyprob I suggest you stop reading now, because today’s shop is exclusively Cyproblematic. I apologise for this, but it has been a very slow week in which even the CyBC’s news shows led with Afghanistan every day. As my knowledge of what is happening in Afghanistan is very basic, I thought it would be preferable to bore readers with the dear Cyprob.

I would also like to give credit to Politis, which somehow managed to link what is going on in Afghanistan with Kyproulla and the Cyprob. On its front page on Tuesday the headline about the US pullout, said ‘Domino developments that touch Cyprus.’ On page 3, the headline was even more local – ‘Victim of the Taliban the Cyprus problem which is sidelined on the international chessboard.’

PREZ NIK scored another Cyprob triumph this week, according to the prez, after the publication by Turkish Cypriot newspaper, Yeniduzen, of an interview given by Mustafa Akinci. Our prez issued a written statement to inform us that Akinci’s comments proved that his version of what had happened at Crans-Montana was the correct one.

“All narratives that attributed the failure at Crans-Montana to our side have been negated,” said Nik, who obviously feels aggrieved that many people with a brain did not buy his explanation of the collapse of the 2017 conference.

The interview, he said was “very revealing, both with regard to Turkey’s unchanging aims as well as with regard to the reasons that led to the collapse of the conference on Cyprus in Crans-Montana.”

Nik had seized Akinci’s comment that at the back of the Turkish leadership’s mind was the aim of turning the pseudo-state into a province of Turkey. His conclusion was that this was Turkey’s aim at Crans-Montana as well and it was the reason for the collapse.

He ignored, however, that in the said interview Akinci revealed that at Crans-Montana Turkey fully backed a federal settlement, which somehow negated his narrative. Was Akinci being truthful on the point that suited Nik’s narrative and untruthful on the point that did not, and he chose to ignore it? You just can’t trust anything these Turks say, even when they negate the narrative.

YOU ALSO need a good helping of audacity, which our prez possesses in abundance, to make the narrative work for you. In his written statement, he also said, very revealingly:

“At the same time, with what Mr Akinci states about the agreement of Berlin, he shows that I did not stop, from the very next day of the failure of the conference in Cyprus in 2017, to seek the resumption of the talks from the point they were stopped at Crans-Montana.”

This is quite a fib, even by Nik’s high standards. From the moment he left Switzerland, he sent the Cyprob in the recycle bin, and concentrated all his efforts on his re-election campaign. A couple of months after he was elected, Akinci had invited him to accept the Guterres framework “without changes, as it had been submitted” and if he agreed to announce it as “strategic agreement.”

Despite his unwavering commitment to the resumption of the talks, which such an agreement would have helped, Nik rejected the proposal, making a fuss about the alleged existence of a second, amended Guterres framework. He even accused the UN of destroying the minutes of the meeting that supposedly amended the original framework.

He spent the next year showing his eagerness to resume talks by insisting these should be based on a framework that actually did not exist.

HIS ZEAL for a resumption of the talks, immediately after the collapse of the conference in July 2017, was exemplified by the fact that he met Akinci two-and-half years later in Berlin in the presence of the UNSG. It was here that he finally accepted there was only one Guterres framework and it was not the one he so insistently referred to.

Until then, he was telling people he met privately, including the Archbishop, that a two-state solution would be preferable, publicly rejecting the idea of political equality, because it would lead to a dysfunctional state (not to mention having to share the spoils of power with the Turkish Cypriots – he did not say this) and toying with the idea of a confederation, which abandoned after seeing the reaction of the parties.

The idea of a two-state solution was first proposed by Nik to Turkey’s foreign minister at Crans-Montana, so despite his public protests about Turkey and Tatar’s insistence on this type of settlement, he cannot be too unhappy with the way things have turned out.

And he is not taking chances. He has recruited as a Cyprob advisor, the most hardline, anti-settlement diplomat, Tasos Tzionis who was Ethnarch Tassos’ right-hand man and specialises in deadlocking peace efforts.

TZIONIS, retired last year, having been appointed permanent secretary of the foreign ministry so he could maximise his monthly pension, but his former protégé, foreign minister Nikos Christodoulides has now become his mentor and arranged a new state job for him.

He will be the director of the newly-established diplomatic academy that comes under the authority of the foreign ministry and starts operating next month. Here Tzionis will be able to continue his noble mission of turning all Cypriot diplomats into small-minded, rabid rejectionists, a task he performed very successfully during his service at the foreign ministry.

He will teach them that the role of the foreign ministry is to find legalistic technicalities to prevent any hint of progress on the Cyprob, although such skills have become unnecessary, now we are moving full-steam ahead for the two-state solution.

He can still, however, impart his wisdom on the techniques of preventing the upgrading of the pseudo-state or the downgrading of the Republic by foreign forces, which could be an issue for a few more years.

MR AND MRS Christodoulides feel indebted to Tzionis, for reasons I cannot go into now, and felt obliged to give him a new role in the family business now that he is retired. What he will be paid for running the academy is unclear, but I doubt he will be producing young Tzionises, committed to the partition of Kyproulla, for free. It seems the Cypriot taxpayer will never cease paying for his services, in ensuring the Turkish Cypriots never get a share of the ambassadorial posts which we want to keep in the family. His sister-in-law and brother-in-law are also ambassadors of the Republic.

IT MIGHT be a coincidence, but anyone going through the crossings since they re-opened, a couple of months ago, could be mistaken into thinking that the government is preparing us for the two-state solution. At all the crossings our cops are now scanning IDs and passports of all Greek Cypriots who want to pass through.

This never happened in the past. At Ayios Dhometios crossing, cars went through to the pseudo-checkpoint, whereas now they are stopped by Cy police and asked to show ID before they are allowed through. The same is done on the return from the north. Having our cops checking our ID when crossing north or returning to the Republic seems like, dare I say, recognition of a border by our authorities.

I asked one of the cops doing the checking what was going on and she politely told me that this was introduced when the crossings re-opened two months ago.  She also informed me that the regulation for checks on Greek Cypriots had existed since the opening of the crossings in 2003 – yes, 18 years ago – but it was never put in force.

I ASKED the police press office about the new regime and it confirmed this was the case at all crossings, but said this was not a decision by the police command. It was a political decision which the police were executing. I could be wrong, but I just could not help thinking that Prez Nik is sneakily preparing us for the two-state solution which would necessarily mean the transformation of the dividing (ceasefire) line into a border. When you consider that an arch-partitionist like the Ethnarch passed the regulation but never implemented it for fear of being accused of promoting the idea of a border, you have to ask what is Nik playing at?

OUR GOVERNMENT has all but surrendered the occupied territory to Turkey without any real protests from the population, but when an obscure, attention-seeking Dutch MP posts a photograph on Twitter of her meeting with some Turkish Cypriot nobody, known as the ‘tourism minister’ mass hysteria grips the country. Social media warriors flew into a rage about this meaningless meeting, the finance minister said she was “a disgrace” in a tweet and a Disy MEP, tweeted ‘shame on you’. Was this collective outrage heat-induced, because it is really difficult to understand why we made such a big deal out of it. Were they afraid that it would lead to the upgrading of the pseudo-state, or is it just that we like to make a fuss about things that are totally inconsequential?

IN LAST week’s celebration of the KKK’s 95th anniversary and Akel’s 80th we omitted to mention its negative role in the efforts to solve the Cyprob, despite always claiming it wanted the reunification with its Turkish Cypriot comrades.

My friend Bambos of Alithia reminded us in his column on Thursday that Akel had turned down the Western settlement framework of 1978, which envisaged a federal settlement and the return of Varosha before the start of negotiations. The Akel leadership was given instructions to reject the framework by the Ambassador of the Soviet Union, Sergei Astavin, on the grounds that it had ‘imperialist origins’ – it had been drafted by US, UK and Canada. This was not some wild gossip but was confirmed by members of Akel central committee of that time.

Then there was the rejection of the Annan plan, in order to cement the ‘yes’, while comrade Tof, as president, dragged his feet in talks, until the pro-settlement, Mehmet Ali Talat was voted out and replaced by a hardliner.

Tug of war over historic ‘Crusader Path’ in north