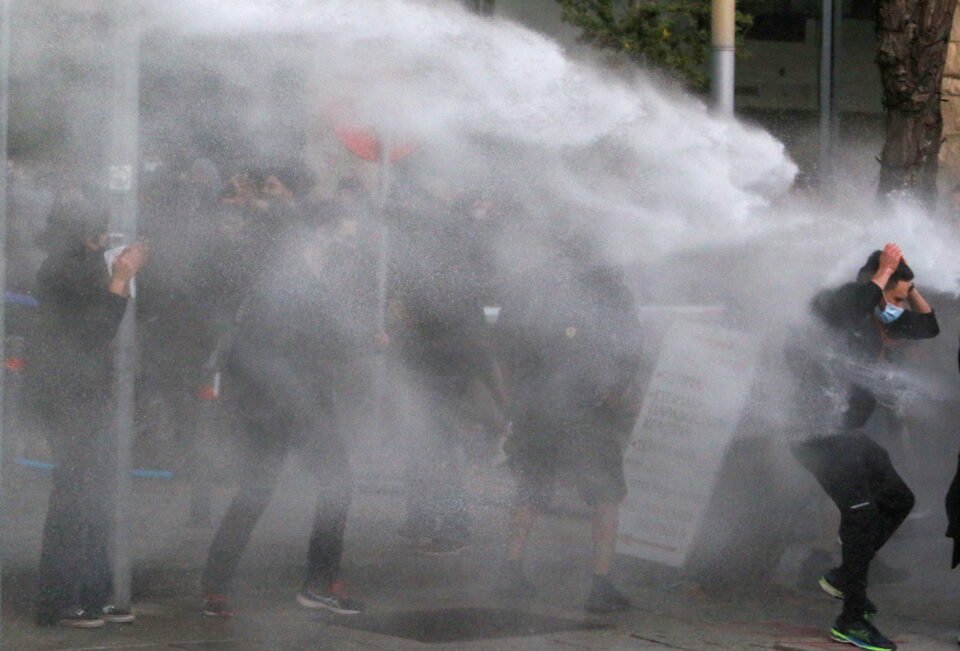 The water cannon being used in the February protest

A local artist injured by a police water cannon during an anti-corruption protest earlier this year gave a bold answer to injustice on Tuesday by launching a short film to celebrate freedom of speech.

Anastasia Demetriadou, aka Nama Dama, 25, released the 30-second teaser of her short film/music video Ode to a Naked King.

“On February 13, I was shot in the head by the police water cannon, during an anti-corruption, peaceful protest in Nicosia,” she said. She was hit while dancing on the side of the road.

“After two eye surgeries and weeks on an intense mental rollercoaster, I decided to create something… That’s what I do when something is troubling me,” she added. Anastasia suffered permanent visual impairment to her left eye from the injury.

This political project, the young woman explains, is her own answer to “the injustice and the brutality of the Cypriot government”.

The short teaser shows clips of Anastasia dancing, as well as her in a blindfold, with her left eye bleeding underneath and later a close up of her red eye. She sings a version of the Greek song Karakolia as covered by the Villagers of Ioannina City rock band which is played in the background.

The entire song directly refers to police officers, claiming “there’s a little fascist with them”.

The description of the teaser includes a quote by Robert Frost: “Freedom lies in being bold”.

“I wanted to celebrate our freedom of speech and action as artists and citizens and have personal closure,” Anastasia added.

In the short film, which is expected to be released on September 3, the artist said she tried to combine “the state, the police, the love for one’s land and the role of the artist”, but she did not want to release more information yet.

Anastasia and her team started working on the project in March and it took them five months to complete the video.

The title of the video was inspired by a painting by George Gavriel where President Nicos Anastasiades is depicted naked, wears a crown and holds a whiskey bottle, the singer said.

The 25-year-old was among the eight people injured during the protest, later condemned by local officials as well as international media that reported on the excessive force used by police to contain the protestors.

The protest was carried out despite a ban on mass gatherings due to the pandemic, with demonstrators protesting against the ban as well as other coronavirus measures.

Eyewitnesses and Cyprus Mail reporters said people were thrown to the ground, beaten with batons and arrested for no apparent reason.

A week later, thousands of people marched in Nicosia in a similar protest against state corruption and pandemic restrictions which ended peacefully.

Following her injury in the protest, Anastasia said she will file a lawsuit against specific officers, a battle that she is still fighting against the state.

“This year has taught me a lot of things. Not giving up and keep pushing in beautiful, creative ways was one of them!” she said.

Further progress made on recovery plan