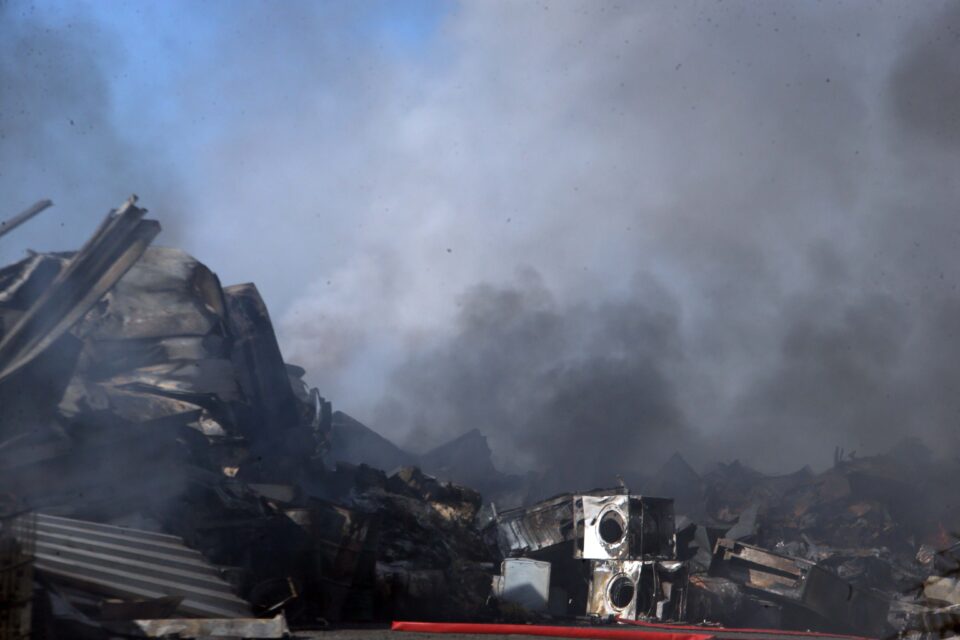 There should be no concerns about the health of those who live close to the Yeri metal recycling factory that was engulfed in flames on Thursday afternoon, the labour inspection department assured, as efforts to extinguish the fire continued on Friday.

During an urgent meeting convened by Agriculture Minister Costas Kadis, a fire service spokesman confirmed that after overnight efforts, the fire is under control, but crews will remain on the scene until it is fully extinguished. It was also decided that experts visit the area to carry out a risk assessment regarding other industrial units there.

At the same time, the labour inspection department and environment departments quelled fears about the fire being a health hazard.

The labour inspection department’s air quality monitoring head Chrysanthos Savvides said that the smoke has risen higher, about 100 to 200 metres – too high to cause any adverse effects to people’s health.

The only cause for concern would be if someone was very close to the fire when it broke out, before the smoke had the chance to travel upwards, Savvides said.

Locals on Thursday were cautioned to stay indoors after the fire broke out, producing a thick cloud of smoke that covered the area. The factory is located in the Yeri industrial area, close to other industrial units, among them an asphalt plant, that are considered high-risk fire hazards by the environment department.

Speaking to CyBC, Environment Department director Costas Hadjipanayiotou said that the department is “not responsible for this high concentration of high-risk units” and can only make observations.

He also said that the factory is licensed to process waste, but recent inspections showed that materials were improperly stored, which may have accelerated the blaze.

Fire service spokesman Andreas Kettis also told CyBC that the causes of the fire have not yet been determined.

“We are not the experts here, but we can provide fire safety tips. For example, big piles must be avoided, and there should be paths in-between them to prevent the spread of fire”.

The factory processes used car parts including car tyres, which could be heard popping in the night. Kettis said that plastics and flammable liquids have burnt, but there are still metallic items on site that are hot and could further fuel the flames.

Savvides said that the toxic smoke created by the chemicals released during the fire has “undoubtedly affected the atmosphere,” as such phenomena are responsible for changing the chemical makeup of the atmosphere. “This is the definition of pollution,” he said.

Nevertheless, Cyprus follows EU instructions, which specify measuring pollution levels at ground level. “This is to measure the effects on health and the public”.

“There is a toxic cloud that was created by the fire. It has now risen to higher levels of the atmosphere as a result of the speed and direction of the wind, which has moved it towards Larnaca,” Savvides said, explaining that this made it impossible to measure its effects at ground level.

Two meteorological stations in Nicosia and one in Larnaca have been checked since Thursday afternoon, showing no effects, he added.

During Friday’s meeting, Kadis and the mayors of Yeri and Dali discussed decisions made by cabinet regarding the future banning of disruptive industrial units in the specific area.

It was also decided that experts will visit the area to perform a risk assessment for the existing industrial units.

Lastly, they were briefed about the environment department’s efforts to relocate the controversial asphalt plant, which are underway.

Meanwhile, the environment service has informed the public and all interested professionals that because of the fire at the facilities of Economides Metal Recycling Ltd at Yeri, the company would stop taking delivery of waste at all its facilities islandwide.

Those who had scheduled such deliveries should make alternative arrangements at other licensed facilities, it added.

Four men in custody for stealing G3, cash and valuables