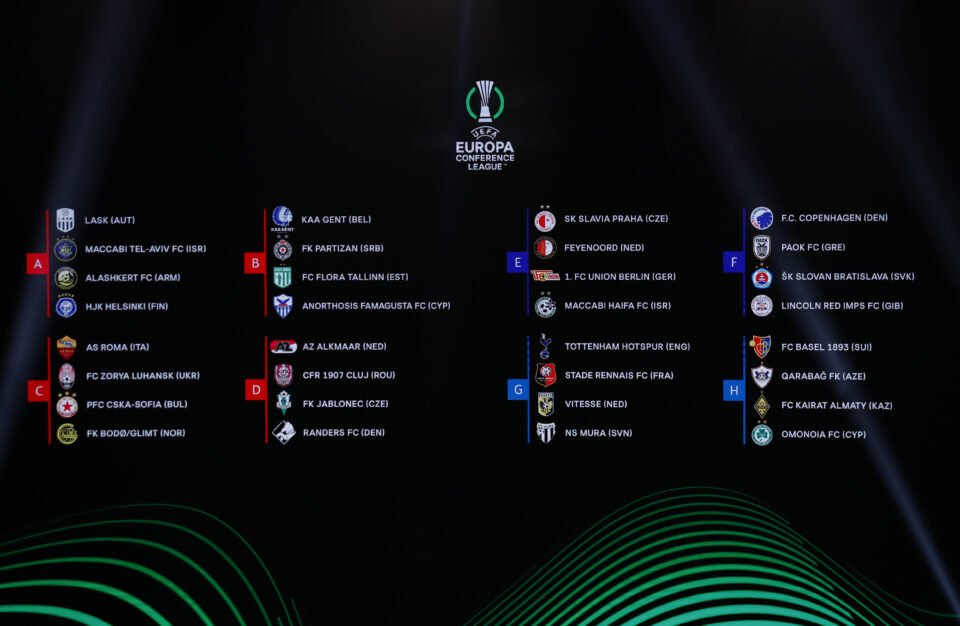 Champions Omonia and cup winners Anorthosis discovered their European opponents on Friday as the draw for the newly-established Conference League took place in Istanbul.

Anorthosis will play in Group B with Belgium’s Gent, Serbia’s Partizan, and Estonia’s Flora Tallinn, who were kicked out from the Europa League qualifying round by Hennin Berg’s team.

Omonia were then eliminated in the last Europa League qualifying round by Antwerp on penalties after winning the first home game 4-2 at GSP Stadium in Nicosia and losing 2-0 away.

Anorthosis on the other hand qualified for the Conference League group stage after beating Israeli side Hapoel Be’er Sheva 3-1 on aggregate.

Meanwhile, Tottenham have been drawn alongside Rennes, Vitesse and Mura in Group G.

It is a big fall for Spurs, who were in the Champions League final just two years ago, and is a result of their seventh-placed finish in the Premier League last season.

Ligue 1 side Rennes will be their toughest test in the group, with Dutch outfit Vitesse and Slovenia’s Mura making up the group.

The group stage games will be played on Thursdays from September 16 to December 9, on the same night as the UEFA Europa League games, kicking off at 7.45pm and 10pm Cyprus time.

Elsewhere, West Ham have been drawn against Dinamo Zagreb, Genk and Rapid Vienna in Group H of the Europa League

Their toughest test will likely be Zagreb, who beat Tottenham in last season’s round of 16.

Leicester, who missed out on Champions League qualification on the final day of last season, are back in the Europa League for the second year running, having been knocked out in the last 32 in 2020/21.

Rangers are back in this competition after failing to make it through the Champions League qualifiers.

They were controversially beaten by Slavia Prague last season and they will return to the Czech Republic capital, having been drawn in Group A against Lyon, Sparta Prague and Brondby.

Celtic are in Group G with Bayer Leverkusen, Real Betis and Ferencvaros.

The group stage kicks off on September 16, with the schedule due in the next 24 hours, with the final set to be at the Estadio Ramón Sánchez-Pizjuán in Sevilla.

UEFA is reviewing whether away fans will be able to travel, with qualifying fixtures across all three club competitions watched by home fans only.