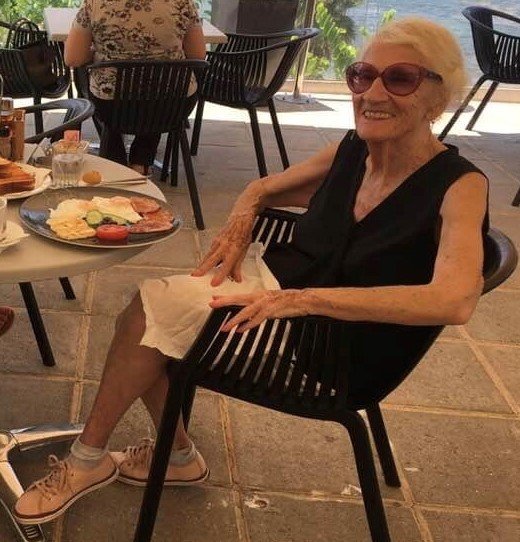 Authorities in Cyprus and the Isle of Man are desperate to find family members of a British woman whose body has lain unclaimed in the morgue of Paphos hospital since her death seven months ago in January.

Unless a family member can be found in the next few months, Patricia Lambert will be given a ‘paupers’ funeral by the state.

On top of that, fraudulent withdrawals of cash have been made from her Isle of Man bank account and squatters are living in the Kato Paphos apartment she owned, according to Ken Corlett, a financial investigator, of the Economic Crime Unit at the Isle of Man Constabulary .

He contacted the Cyprus Mail seeking assistance in tracing the next of kin following the death of Patricia Lambert, nee West, aged 86, in Paphos on January 11.

“This is a sad case, and it would be great to resolve it. I got involved because I am investigating fraudulent withdrawals from her Isle of Man bank account,” Corlett told the Cyprus Mail.

Corlett has made extensive inquiries to try and identify Patricia’s relatives and to establish her working life in the UK, all with little success.

A local Paphos lawyer confirmed that Patricia was previously a client, but that the firm had not represented her for the last few years, and they had no idea of where any of her relatives may be.

She owned her own property but left no will.

The Cyprus Mail spoke to friends and acquaintances of Patricia and confirmed that family members had visited Patricia in the last couple of years, staying at a Paphos hotel, but that they had so far been unable to track them down.

“A group of aggressive Bulgarian men that don’t speak English are also occupying her apartment and the Paphos police have done nothing to kick them out. Officers said they couldn’t unless a family member stepped forwards,” a friend, who did not want to be named for fear of reprisals, told the Cyprus Mail.

This was confirmed by Corlett, who has reported money being taken in Paphos from her Isle of Man bank account. A number of withdrawals of around €400 and €500 were made soon after her death.

“I’ve made an Interpol referral to the Cyprus police about the fraudulent ATM withdrawals (in Cyprus) from Patricia’s bank account. They needed a complainant to take it further. I have also heard that squatters are now in Patricia’s apartment.”

In 1983, Patricia retired from a company called Peabody Foods of Hamm Moor Lane, Addlestone, Surrey in the UK, he said.

“I’m confident this is correct. Unfortunately, this company no longer exists. I even asked a local pub on Hamm Moor Lane to make an appeal without success,” he said.

The investigator also believes that Patricia may have been married twice and that there is a relative called Rosemary Lambert in the UK but has not been unable to identify her.

“I thought of social media, Facebook and so on, but this is such a common name,” he said.

Information gleaned also led Corlett to inquire if Patricia was previously a civil servant in the UK. Unfortunately, there is no trace of her in the Civil Service HR register of pensioners.

Patricia also worked for Gallaher’s Tobacco in London, they were taken over by a company called JTI, but a search of their employee records found no evidence of Patricia working there.

Her friends say Patricia did have a partner, John, in Paphos who lived separately. He died a few months before her death and, according to friends, his death was a catalyst in her health deteriorating.

“She became much weaker and disturbed after this as he had died in his home and his body wasn’t discovered for a few days, it was very upsetting,” a friend said.

The investigator has also traced financial records, insurance policies, savings accounts and Department of Work and Pensions (DWP) records for Patricia but none of them could provide any details of her family or next of kin.

“I have also contacted a company that specialises in tracing relatives of deceased people run by an ex-policeman. He identified a Patricia Lambert born in Marylebone, London and another in Croydon, London, with the same date of birth, married in Ealing, London to Terence Lambert (born Stepney in 1938). Not having Patricia’s passport has been a hindrance for me,” he said.

It is understood that the British High Commission in Nicosia have Patricia’s passport.

”Unfortunately, the British High Commission in Nicosia, were unable to locate the family of the deceased,” Corlett said.

The British High Commission would not be drawn on the matter, nor give out any further information regarding the dead woman.

“We are aware of this situation and are assisting,” was all a High Commission representative said.

When a British national dies in Cyprus without known relatives, the British High Commission has to make an application to the state for a burial. However, this is not usually carried out straight away in the hope that they are able to locate relatives.

There is not a ‘set time’ that bodies can remain in mortuaries, but it is usually around one year, according to Angel Guardians Funeral Home in Paphos.

“After a year, the deceased will be given a ‘paupers’ service which is paid for by the state. It is a basic service and the body is laid to rest in a cemetery where the government sees fit,” a representative of the company told the Cyprus Mail.

Patricia’s body is still being held at Paphos general hospital, according to the funeral home.

The representative said the home had been informed that Patricia had died on January 11 and that there was a lawyer attempting to get a court order to release funds for a temporary burial plot for her. In April, they were then informed that her body was still at Paphos general hospital.

If family members can’t be traced initially, an application is made to the police, who then apply to the court. They must then exhaust ‘all avenues’ to try to find family members before it is then passed on to the state who will give the deceased a ‘paupers’ funeral.

Corlett has also appealed to Surrey police for help, however on Thursday he received an email from them referring him to local radio stations.

“They said that they couldn’t assist any further. This is a very sad situation and any assistance Cyprus Mail readers can provide will be gratefully received,” he said.

The last known photograph of Patricia was taken last summer at an outing to a Paphos cafe.

Patricia’s friends in Cyprus are also appealing to the public to step forward with any information at all, however small, that may help to trace family members.

“The poor soul is now dumped in a morgue and forgotten,” one said. “She deserves a decent burial at least. She can’t be buried like an anonymous poor person while squatters are enjoying the comfort of her estate and spending her money.”

Coronavirus: How possible is herd immunity?