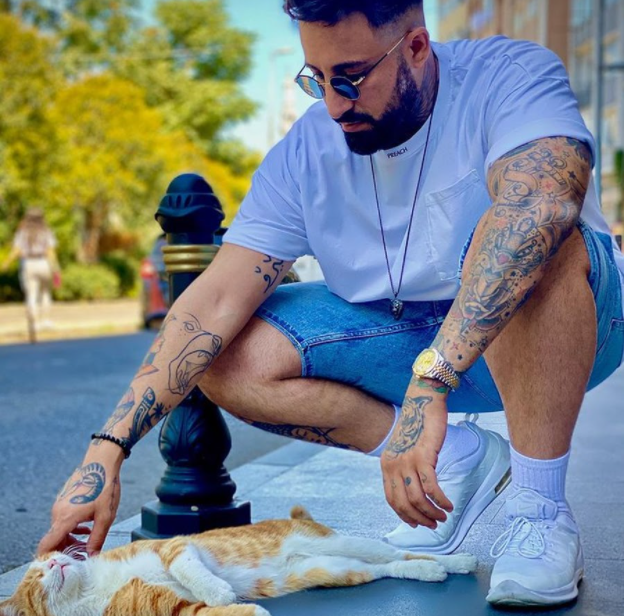 Besides giving beard advice on social media, Agrie Ahmad, or otherwise Bartmann, is also acknowledged for his work with vulnerable people. Argie Ahmad’s flirtation with beard care started a few years back when he saw a gap in German-speaking markets for beard care tips. His beard care videos and beard care products have ensured Agrie’s success as an influencer for men with beards and those wanting a transformation. Besides helping people with makeovers and beard advice, Agrie Ahmed is committed to helping vulnerable members of the community, whether they are homeless or retirees.

Online marketing has always been Agrie’s strong point. Born in Mannheim, Germany, the 35-year-old businessman and beard man started studying business management in his hometown. He ended up completing his studies with a Bachelor of Science degree in 2014, but by that time, he also had the idea for his YouTube channel.

“Beard and beard care were both already important to me at the time,” he recently said in an interview. “Growing a beard was a new trend after years of men preferring the beardless look, and we were all looking for tips to grow lush facial hair.” It was during a practical semester in Karlsruhe that he realized there was a huge gap in the beard market waiting for the taking. His experience with online marketing helped Agrie get the ball rolling and he knew he had to go to Berlin to get his new business started.

To keep afloat he promoted and sold care products for women. Ahmad also shot four videos a month in which his tips were accompanied by promotions for beard products from the UK and America.

His videos on how to groom a beard were the first step. These were shot with his iPhone 5 by friends or family, leading to some funny and confusing moments. But it wasn’t long before requests for collaborations started coming in, as did the money. His small number of targeted followers soon grew after he included videos where he tested and evaluated barbers.

This led to an increase in business for the barbers featured, and Bartmann’s popularity continued to grow. The development and testing of products was the next step in the growth of his enterprise. This involved testing endless products before starting small-scale production of his beard oil, the result of a team effort with a pharmacist in Karlsruhe.

Agrie offers men contemplating growing a beard a plethora of advice, including which type of beard suits their features best.

Transformations for the vulnerable

Today, his exceptional success allows Ahmad to share that feel-good feeling with those in need. Even if only for a day, Agrie assists homeless people and retirees to experience an unforgettable grooming session that includes a refreshing shower, haircut, beard trim, and some new clothes. These makeovers are offered at his barbershop in Mannheim and are supported by donations from businesses and others in the community.

Bartmann uses this opportunity as a successful YouTuber to help others. Watching the videos of homeless people getting a makeover is incredibly heartwarming, whether they are in Germany or abroad. Popular videos among his followers include one of a homeless man, Peter. Ahmad and his team help to build a new life with Peter’s spectacular and emotional transformation. After twenty years, the video culminates in a delightful evening at a local shisha bar for the homeless German.

Bartmann’s YouTube subscribers get to watch other transformations, including that of Kasim, a man in Istanbul, Turkey. Karim enjoys a hammam after his shower and some new clothes. It is touching to see how Kasim, who sleeps on cardboard in the park, enjoys having his hair and beard trimmed before presenting audiences with a beautiful rendition of a Turkish song on his guitar.

Today, Agrie has a thriving enterprise. The increased demand for his products meant that he couldn’t continue doing the labeling and packaging himself, and his beard oil is now available on Amazon. He is also the proud owner of Bartmann, one of the most popular barbershops in Germany. Agrie Ahmad sports his beard in style and many men follow him to attain the same look. Relocating to Dubai, he is sure to continue his business in the same successful manner while presenting vulnerable people with the opportunity to feel good.

How did it come to this? Barca’s transfer window explained

A minute with: Elena Charitou, Graphic Designer and Photographer

60 years of blowing a trumpet

Lessons from leaders in sustainability like Elon Musk and Weslee Andrews

Taylor Spadaccino: The rising star of the fitness industry