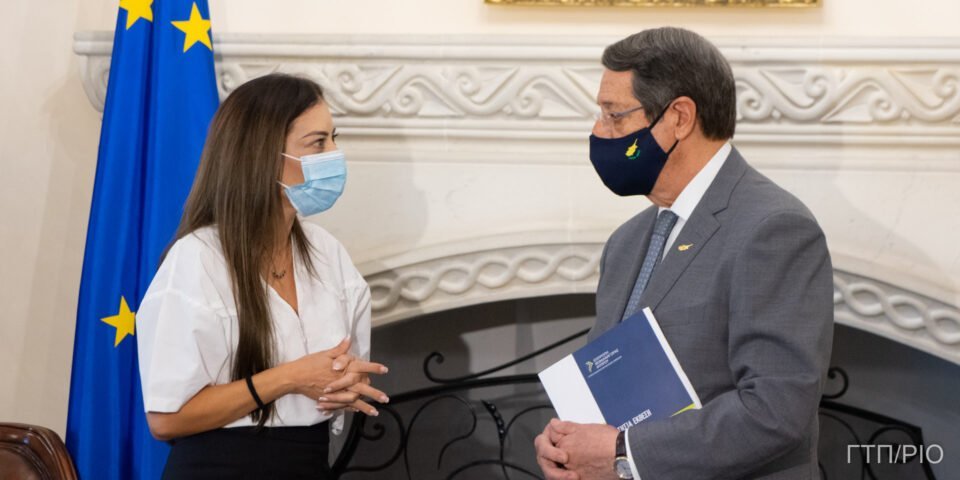 The Cyprus Securities and Exchange Commission (CySEC) presented its annual report for the previous year to the President of the Republic of Cyprus Nicos Anastasiades.

The presentation of the report was conducted by CySEC president Demetra Kalogerou and took place on Friday, September 3, at the presidential palace in Nicosia.

“We had a good year [in 2020]. We provided licenses to eighty new companies, and imposed fines of €3 million in total on violating companies, including for issues pertaining to illicit funds, but also for other violations of our laws,” Kalogerou said during the presentation.

The CySEC president also made reference to new products launched by the commission that are addressed to the needs of small-to-medium enterprises (SMEs), as well as to the creation of a new platform that will soon be licensed by the commission.

“There is growth and the commission continues to grow itself,” Kalogerou said.

“I hope that the new administration of the commission continues with the same vigour and energy so that CySEC continues to be a reliable organisation just as it is today,” the CySEC president added.

Kalogerou also explained that, excluding the Cyprus Stock Exchange which had been wrecked in 1999, there was no real market to speak of in 2011, with just a handful of stock companies being active at the time and a long road to the proper development of the market ahead.

“We now have a market with 800 active companies,” Kalogerou said, explaining that the various supervising bodies contribute to the economic development of Cyprus by offering a means of generating revenue.

“The commission of today has no resemblance to how it used to be,” Kalogerou stated.

“Our growth has been immense and it happened even during very difficult times,” she added.

Kalogerou concluded her speech by thanking the president for his support throughout her tenure.

Upon the reception of the report, the president himself thanked Kalogerou and praised the work of the commission.

“Each person who assumes a public office is judged by the final result and I am sincerely happy,” the president said.

“It is with a lot of sincerity, but also with satisfaction, that I warmly congratulate you for the complete success of the mission entrusted to you and with taking into account what you received and what you are now handing over,” the president added.

The president concluded by saying that Kalogerou helped facilitate the restoration of trust towards the Cypriot financial authorities through the tightening up and the diversification of the relevant legislative framework during these past ten years.

‘Extremely difficult, if not impossible’ to reach solution if Varosha status changes

New label produces music by the glory of God