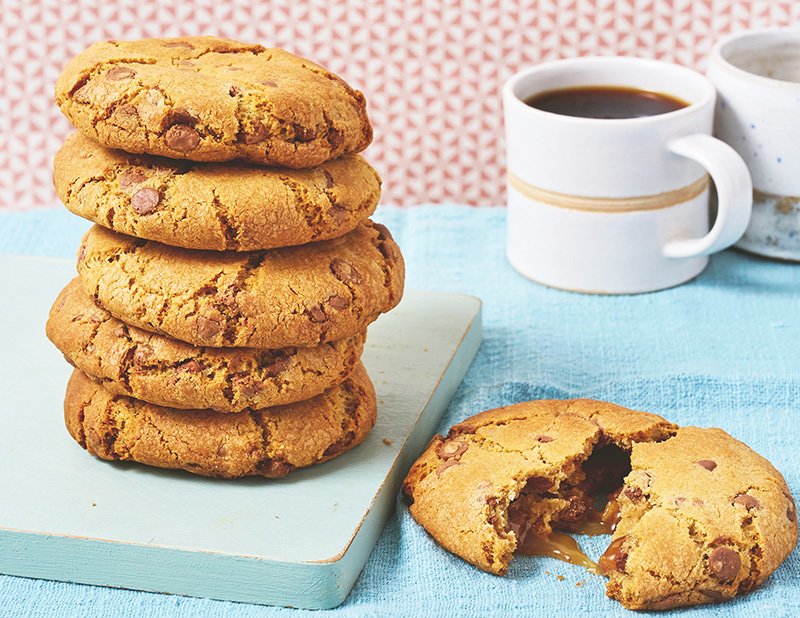 This is the pattern of food writer Jane Dunn’s debut cookbook, named after her blog, Jane’s Patisserie. Sweet treat after sweet treat; each one seemingly promising comfort, deliciousness and nostalgia.

The 28-year-old has been blogging her bakes for around six-and-a-half years, creating recipes designed to suit all skill levels – hence why she wouldn’t dream of judging you for buying ready-made caramel, and gladly recommends decorating her no-bake millionaire’s cheesecake with shop-bought millionaire shortbread bites.

Jane’s Patisserie the cookbook presents her easy-breezy chocolate-adoring ethos in paper form – and “you can get it messy!” says Dunn, which means no more coating your phone in flour as you scroll to the next step in the recipe.

Eliminating fear around baking is something that underpins Dunn’s bakes. Each comes with customisable elements, so you can amp up flavour combinations, swap in ingredients you do have for ones you don’t, and avoid having to nip to the shops mid-mix for a missing item.

Realising her initial plans to study graphic design or architecture at university weren’t to be, Dunn leapt into an “intense” six-month cookery course in Devon, with a view to work on patisserie in restaurants. Cookery school helped her understand that, “I want to do this with my life, completely and utterly”, she says. But the industry is a tough one, and while her peers went into the kitchens of super yachts, Rosette and Michelin starred restaurants, she found she “wasn’t a massive fan” of the lifestyle and began blogging instead.

By April 2020, she’d hit around 200,000 followers, but as the first lockdown drove many of us towards banana bread and comfort baking, more and more people began to discover her blog. “I don’t think I ever could have imagined it. It was surreal,” she says now, with three-quarters of a million Instagram followers to her name. “Everyone was just baking so much stuff every day. It was amazing to see it. I’d get comments from teachers saying, ‘We made this in class over Zoom!’ It was the cutest thing,” she recalls.

What she does find problematic is when sugar is demonised, and when people make comments that connect food with guilt and judgement. “I’ve suffered with an eating disorder in the past,” she notes, “so I find it quite difficult when people make those associations.”

Comments like, ‘that’s diabetes on a plate’ she says are unhelpful, potentially harmful and “can be insulting to people who do have diabetes, whether it’s type one or two”. It’s also unnecessary when “everything is about balance, at the end of the day. My recipes are designed to be for an occasion, not something you eat every second of the day.” Within a balanced diet, enjoying the odd slice of cake is perfectly reasonable – “even if it’s full of sugar,” says Dunn, “which I think makes it taste beautiful!

Preheat the oven to 180C/160C fan and grease and line a 900g loaf tin with parchment paper.

Put the butter and caster sugar into a bowl and beat until light and fluffy. Add the self-raising flour, eggs and lime zest to the bowl, and mix again until combined.

Put the tablespoon of plain flour into a bowl and add the blueberries, mixing until they are coated (this stops the blueberries all sinking to the bottom of the cake). Fold the blueberries through the cake mixture, then pour into the prepared tin and bake for 50–55 minutes, or until baked through. Remove the cake from the oven, and leave to cool fully in the tin while you make the buttercream.

Add the butter to a bowl and beat on its own for a few minutes to loosen and soften. Add the icing sugar and beat again until combined. Finally, add the lime juice and beat again.

Pipe or spread the buttercream onto the loaf cake, then sprinkle over the blueberries and lime zest.

Beat the butter and soft light brown sugar together until creamy. Add the egg and vanilla extract and beat again.

Add the plain flour, baking powder, bicarbonate of soda and sea salt and combine until a cookie dough is formed, then add the chocolate chips or chunks and mix until they are evenly distributed.

Portion your dough out into eight balls – each should weigh about 110g. Once rolled into balls, flatten slightly and put one or two soft caramels in the middle, then wrap the cookie dough around the caramels and re-roll into balls. Put into the freezer for at least 30 minutes, or in the fridge for an hour or so. While the cookie dough is chilling, preheat the oven to 200°C/180°C fan and line two baking trays with parchment paper.

Take your cookies out of the freezer or fridge and put onto the lined trays (I do four cookies per tray) and bake for 12–14 minutes. Once baked, leave the cookies to cool on the trays for at least 30 minutes as they will continue to bake while cooling.

Flawless Sakkari faces Kvitova test in US Open third round