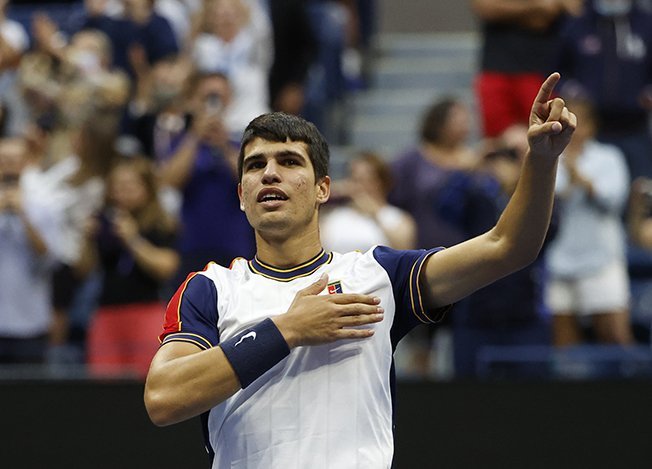 Teenagers have lit up the U.S. Open this year and on Tuesday Leylah Fernandez and Carlos Alcaraz will look to take their dream runs a step further by claiming a maiden spot in the semi-finals at Flushing Meadows.

The withdrawal of several big names before the start of the tournament has allowed new faces to make their mark in New York.

British 18-year-old Emma Raducanu won her fourth round match on Monday, joining Alcaraz, 18, and Fernandez, who has just turned 19, in the quarter-finals.

This year’s event will be the first to feature 18-year-old male and female quarter-finalists since 1988.

Canada’s Fernandez will look to back up her victories over former champions Naomi Osaka and Angelique Kerber when she takes on Ukraine’s Elina Svitolina in the second match on Arthur Ashe Stadium.

“Seeing all these teenagers, the youngsters doing so great at the U.S. Open … is eye-opening I think to the world, to the tennis world,” Fernandez said after her win over Kerber.

“There is not only like one group of tennis players but there is a new wave of young generations that’s coming up, and just trying to make an impact in the tennis game as much as they can.”

Spain’s Alcaraz became the youngest player in the Open era to reach the quarter-finals of the men’s tournament in New York with his victory over Germany’s Peter Gojowczyk on Sunday.

Alcaraz, who will face Canadian 12th seed Felix Auger-Aliassime in the last match on Ashe, is taking things one day at a time.

“I know that in Spain, they are talking about me a lot,” Alcaraz said. “I (am) trying not to think about this … Just focus on New York, focus on every day here.”

Second seed Daniil Medvedev will continue his quest for a maiden major title when he kicks things off on Arthur Ashe against Dutch qualifier Botic van de Zandschulp in the first career meeting between the two.

Russian Medvedev, the runner-up at Flushing Meadows in 2019, has cruised through the first week without dropping a set, while Van de Zandschulp has enjoyed a surprise run highlighted by a gruelling five-set win over Argentina’s Diego Schwartzman.

Order of play on the main show courts on the ninth day of the U.S. Open on Tuesday (play starts at 1600 GMT/12 PM ET unless stated, prefix number denotes seeding):