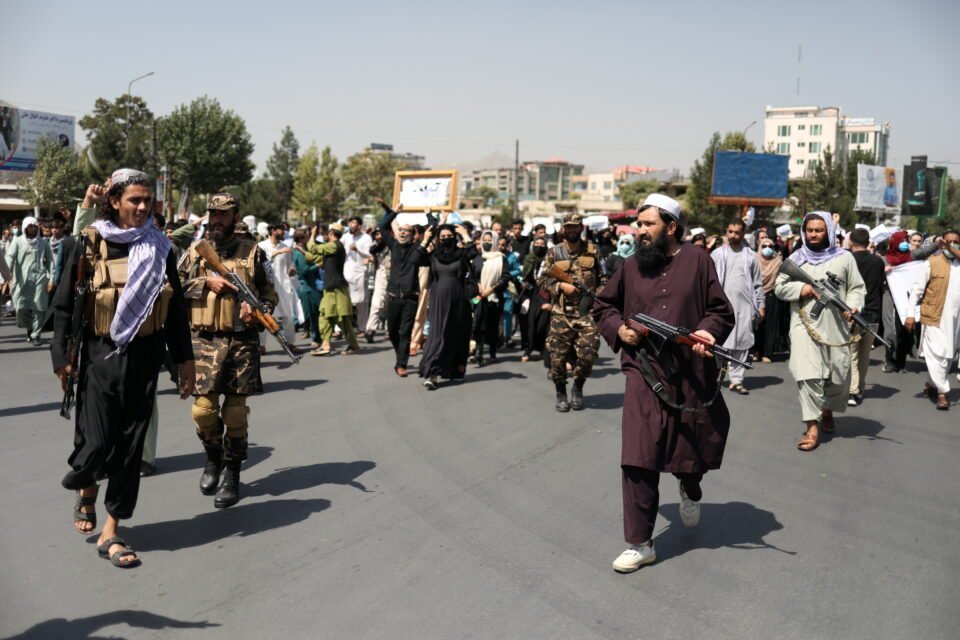 Taliban soldiers stand in front of protesters in Kabul

Taliban gunmen fired in the air on Tuesday to scatter protesters in the Afghan capital of Kabul, witnesses said, as video showed scores of people scurrying to escape volleys of gunfire, although there were no immediate reports of injuries.

Hundreds of men and women shouting slogans such as “Long live the resistance,” and “Death to Pakistan” marched in the streets to protest against the Taliban and what they called interference in Afghanistan’s affairs by neighbouring Pakistan.

“The Islamic government is shooting at our poor people,” one panic-stricken woman on the street says over sounds of gunfire in an Iranian television news video clip posted on Twitter. “These people (Taliban) are very unjust, and they are not human at all.”

U.S. Secretary of State Antony Blinken said on Tuesday the United States is in contact with about 100 Americans who have remained behind in Afghanistan and is working to make sure charter flights can leave safely.

In the weeks before the last U.S. troops completed their withdrawal from Kabul, U.S.-led foreign forces evacuated about 124,000 foreigners and at-risk Afghans but tens of thousands who fear Taliban retribution were left behind.

Speaking to reporters on a visit to Doha, capital of the Middle Eastern nation of Qatar, Blinken said Taliban officials had told the United States they would let people with travel documents depart freely.

Blinken denied reports that the Taliban had blocked Americans attempting to fly out of of a northern Afghan city, but said the group had not allowed charter flights to depart because some people lacked valid travel documents.

Reports have emerged over the past few days that 1,000 people, including Americans, had been stuck at Mazar-i-Sharif airport for days awaiting clearance for their charter flights to leave. One organizer blamed the delay on the State Department.

At the same news conference, Qatar’s Foreign Minister Sheikh Mohammed bin Abdulrahman Al Thani said his country hoped Kabul airport would be operational in the next few days, but no deal had yet been reached on how to run it.

Turkey said airport security was the main issue in the talks with the Taliban.

About 1,000 people, including Americans, have been stuck in the northern Afghanistan city of Mazar-i-Sharif for days awaiting clearance for charter flights to leave, an organiser told Reuters, blaming the delay on the U.S. State Department.

Reuters could not independently verify the details of the account.

On Monday, the Islamist militants had claimed victory in the last Afghan region still holding out against their rule, declaring that the capture of the Panjshir valley completed their takeover, and promising to name a new government soon.

Pictures on social media showed Taliban members standing in front of the gate of the Panjshir provincial governor’s compound after days of fighting with the National Resistance Front of Afghanistan (NRFA), commanded by Panjshiri leader Ahmad Massoud.

“Panjshir, which was the last hideout of the escapee enemy, is captured,” Taliban spokesman Zabihullah Mujahid told a news conference.

Massoud did not concede defeat, saying his force, consisting of the remnants of the regular Afghan army as well as local militia fighters, was still fighting.

“We are in Panjshir and our resistance will continue,” he said on Twitter. He was safe, he added, but gave no details of his whereabouts.

The Taliban, who swept across Afghanistan last month as the U.S.-backed government collapsed, has repeatedly sought to reassure Afghans and foreign countries that they will not return to the brutality of their last period of rule two decades ago, marked by spectacles of violent punishment and the barring of women and girls from public life.

But more than three weeks after seizing Kabul, they have yet to announce a government or detail the social curbs they plan to enforce.

Asked whether the United States would recognise the Taliban, U.S. President Joe Biden told reporters at the White House late on Monday, “That’s a long way off.”

Teachers and students at universities in Afghanistan’s largest cities of Kabul, Kandahar and Herat, told Reuters that female students were being segregated in class with curtains, taught separately or limited to some campus areas.

“Putting up curtains is not acceptable,” Anjila, a 21-year-old female student at Kabul University, told Reuters by telephone, adding that women had sat apart from males in classrooms before the Taliban took over, but without barriers.

“I really felt terrible when I entered the class … We are gradually going back to 20 years ago.”

The conflict in Afghanistan, coupled with drought and coronavirus, has left 18 million people in need of humanitarian aid, the International Federation of Red Cross and Red Crescent Societies (IFRC) said on Tuesday, seeking urgent international action.

It added that tens of thousands of families had left their homes, seeking food and shelter in urban areas where some are staying in relief camps lacking food or income.

Basic services are facing collapse and food and other aid is starting to run out, the U.N. Office for the Coordination of Humanitarian Affairs (OCHA) said. OCHA spokesperson Jens Laerke urged donors to give more ahead of an international aid conference for Afghanistan on Sept. 13.

Hundreds of medical facilities are at risk of closure because Western donors are barred from dealing with the Taliban, a World Health Organization official said.

The WHO is scrambling to fill the gap with supplies, equipment and financing to 500 health centres, and was liaising with Qatar for medical deliveries, the agency’s regional emergency director, Rick Brennan, told Reuters.

Drought and war have forced about 5.5 million Afghans to flee their homes, including more than 550,000 newly displaced in 2021, the International Organization for Migration says.

Western powers say they are prepared to send humanitarian aid, but broader economic engagement would depend on the shape of the new Taliban government.

Football congress kicks off in Limassol