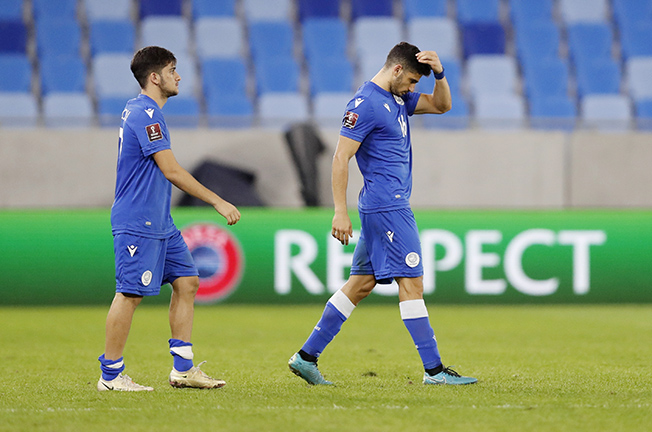 Cyprus were beaten 2-0 in Bratislava

Cyprus were beaten 2-0 in Slovakia on Tuesday night to round off a miserable triple-header in World Cup qualifying.

After losing 3-0 in Malta and 2-0 at home to Russia, Cyprus left Slovakia empty-handed again, to sit bottom of Group H with four points after six games.

Also on Tuesday, Croatia went top of the group after attacking midfielder Mario Pasalic scored one goal and set up another in a 3-0 home win over neighbours Slovenia.

The result left Croatia on 13 points from six games, ahead of Russia on goal difference after the Russians ground out a 2-0 home win over Malta.

Scotland boosted their World Cup qualification hopes in Group F as a Lyndon Dykes penalty earned them a 1-0 win over Austria on Tuesday that took them into second place.

A VAR review handed the Scots a 30th-minute spot kick after defender Martin Hinteregger manhandled Che Adams and Dykes drove his penalty down the middle and through keeper Daniel Bachmann.

Austria were then furious they were not awarded a penalty just before the break when the ball struck Stephen O’Donnell’s arm as he rose for a header with Christoph Baumgartner.

Scotland then defended superbly to hold onto the lead, with Steve Clarke’s side moving to 11 points, a point ahead of Israel and four clear of the Austrians.

The result was another setback for Austria after their 5-2 loss in Israel on Saturday and their fans booed and heckled them as they left the field.

Denmark lead the group on a perfect 18 points from six matches after their 5-0 thrashing of visitors Israel but with four matches remaining the Scots now have a good chance of securing second spot and a place in the playoffs.

A freakish own goal from central defender Nikola Milenkovic earned Ireland a 1-1 home draw with Serbia as the visitors missed a string of chances after Sergej Milinkovic-Savic fired them ahead in their Group A World Cup qualifier on Tuesday.

The result left Serbia second in the group on 11 points from five games, two behind leaders Portugal who leapfrogged them into pole position with a 3-0 win in Azerbaijan earlier in the day.

Memphis Depay scored a hat-trick as the Netherlands ran out 6-1 winners over 10-man Turkey at the Amsterdam Arena on Tuesday to go top of World Cup qualifying Group G.

It was the first international treble for the 27-year-old striker as the Dutch posted an emphatic victory for the second time in four days to reach 13 points from six games and take over from Turkey at the head of the section.

Turkey slipped from top to third in the group as they stayed on 11 points with Norway moving second, behind the Dutch on goal difference, after beating Gibraltar 5-1 on Tuesday.

Antoine Griezmann played chief tormentor as France sprung back into life to end a five-game winless streak by beating visitors Finland 2-0 in a World Cup Group D qualifier on Tuesday.

Griezmann struck in each half after his partnership with Karim Benzema bore fruit in satisfying fashion to put the world champions on 12 points from six matches at the top of the group.

Finland, who had a decent opening half, are third on five points but have two games in hand of the French.