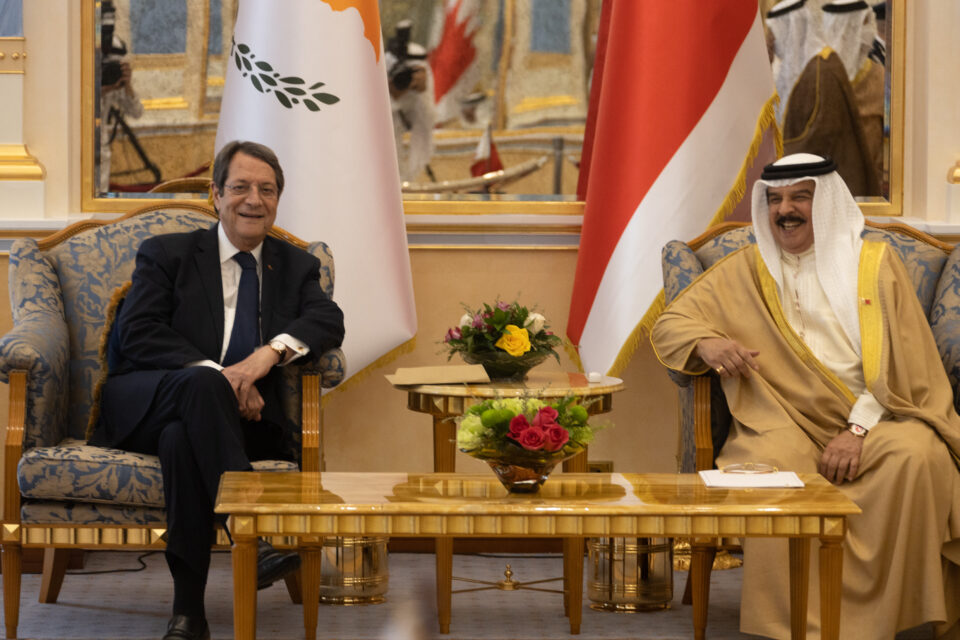 President Nicos Anastasiades on Monday met with the King of Bahrain, Hamad bin Isa Al Khalifa, while the two countries signed agreements on visa waivers for diplomatic passports and on economic and technical cooperation.

Anastasiades, who arrived in Manama on Sunday, was officially welcomed on Monday at the Gudhaibiya Palace by King Hamad bin Isa Al Khalifa.

The visit was part of a government decision to develop bilateral relations with Arab Gulf countries, an official statement said.

Anastasiades, who was accompanied by the ministers of foreign affairs, energy, agriculture and the deputy minister for tourism, chaired with the king extended talks between the delegations of the two countries.

Among the issues on the agenda were the situation in the eastern Mediterranean, the developments on the Cyprus problem, and bilateral relations mainly on matters concerning commerce, renewable resources, agriculture, climate change, tourism and the connectivity between the two countries. EU-Bahrain relations were also discussed.

Anastasiades also extended an invitation to the king to visit Cyprus.

Following the talks, an agreement and a Memorandum of Understanding (MoU) were signed among the two countries.

Minister of Foreign Affairs Nikos Christodoulides signed with his Bahraini counterpart Dr Abdullatif bin Rashid Alzayani, an agreement between the two countries on the exemption of visa requirements for holders of diplomatic, special, and service passports.

An MoU on Economic and Technical Cooperation was signed by the Minister of Energy, Commerce and Industry, Natasa Pilides, and the Minister of Finance and National Economy of Bahrain Shaikh Salman Bin Khalifa Al-Khalifa.

Earlier, Anastasiades was briefed on the investment programmes carried out by Bahrain’s Economic Development Council. The Council’s director, Khalid Embrahim Humaidan, briefed the Cypriot delegation on the course of the investment programmes and its future actions, as well as the fundamental priority sectors of the council which include telecommunications, tourism, construction, education, health services, financial and economic services and real estate.

Energy Minister Pilides referred to Cyprus’ comparative advantages as an investment and business destination, stressing the opportunities provided in a continued competitive environment. She also suggested holding a business forum in Cyprus where the business communities of both countries can examine ways to cooperate.

Pilides highlighted the incentives to attract investments and business activities in Cyprus, noting that half a billion euros will be invested in the green economy in the coming years through the EU Recovery and Resilience Plan.

To a question on the council’s plans to develop the coastal areas of Bahrain and tourism, the country’s Tourism Minister Zayed Rashid Al Zayani referred to the planning to develop the hotel industry and pointed out that they are considering the expansion of the country’s national airline, Gulf Air, worldwide.

Cyprus, he said, was one of the first destinations they returned to after the lockdown noting there is a very successful route to Cyprus. We have, said Al Zayani, connectivity with Cyprus and Greece via Gulf Air, adding they are considering Cyprus becoming a transit hub to Europe and perhaps to the US.

The ministers also held bilateral meetings with their counterparts while Deputy Minister for Tourism, Savvas Perdios said he would remain in Bahrain until the end of the week, for meetings with stakeholders in the fields of aviation and tourism.

He also expressed satisfaction with Bahrain’s intention to expand its activities in Cyprus with the country’s national carrier, noting that the two countries can be further promoted in terms of their tourism product.