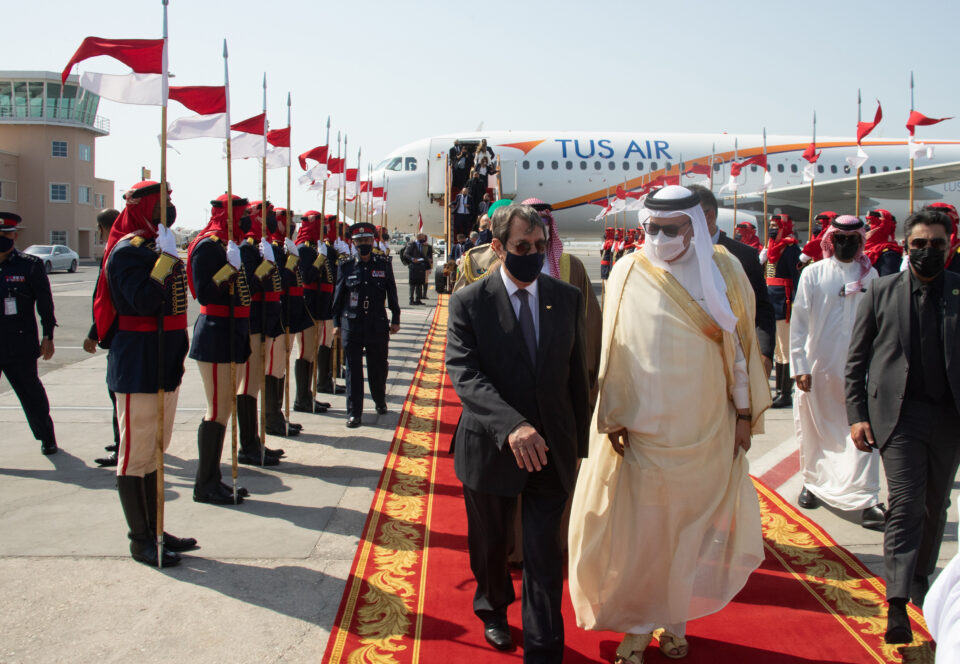 President Nicos Anastasiades is in Bahrain on an official visit during which an MoU on Financial and Technical Cooperation and a Visa Waiver Agreement for diplomatic, special, and official passports are expected to be signed.

Upon his arrival at Bahrain International Airport on Sunday, the President was received by the Minister of Foreign Affairs, Dr. Abdullatif bin Rashid Al Zayani and the Minister of Youth and Sports Mr. Ayman Al-Moayed.

“The visit takes place in the framework of a government decision to develop bilateral relations with Arab Gulf countries,” the press release added.

During the visit, Cyprus’ President will have a meeting with King of Bahrain Hamad bin Isa Khalifa, with whom they will also chair extended talks between the delegations of the two countries.

A Memorandum of Understanding on Financial and Technical Cooperation and a Visa Waiver Agreement for diplomatic, special, and official passports will be also signed.

“The government considers the further development of relations with Bahrain as particularly important since it enhances the multilateral approach of its foreign policy since, among other things, the President of the Republic will discuss Bahrain’s support of our country in the Islamic Cooperation Organisation, as well as of his Climate Change Initiative,” the press release added.

The visit is also seen as an opportunity for mutual briefing and exchange of views on recent developments in the broader region, it said adding that on the part of President Anastasiades emphasis will be placed on Turkish provocations against Cyprus.

It is further noted that the fact that they are both islands, their population size, as well as their strategic geographical position, create the conditions for a greater exchange of experiences and cooperation in a significant number of fields.

During his stay in Bahrain President Anastasiades will visit the country’s Economic Development Council responsible in the area of investments, while on the sidelines of the official visit, the Ministers accompanying him will have bilateral meetings with their counterparts, the press release concluded.