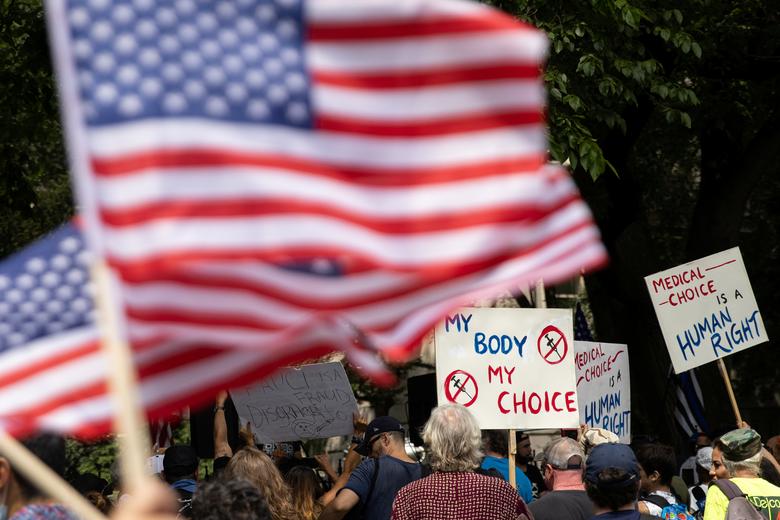 Eugenics was a 20th-century pseudo-science that purported to improve the human breed by weeding out the ‘least fit’, often by measures like compulsory sterilisation or, in the case of the Nazis, death camps. But this is the 21st century, and now people can do it for themselves.

‘Auto-eugenics’ is the just-named phenomenon (you’re welcome) in which the excessively gullible and the intellectually challenged are weeding themselves out. It’s most prominent in the United States, where 28 per cent of Americans say they do not plan to get vaccinated against coronavirus or are unsure whether they will do so.

The only country in the developed world where vaccine refuseniks are more numerous is Russia, where they at least have the excuse that the state lies to them about everything all the time. Typically, however, American vaccine refusal is twice as high as in other OECD countries – and so, of course, is the Covid-19 death rate.

In fact, it’s considerably more than twice as high, because a bigger proportion of unvaccinated people means much more virus circulating in the population.

Covid deaths in the United States last week were running around two thousand a day, whereas in Canada, right next-door, they were around thirty. If Canada had the same vaccination and death rates as the US, it would be losing almost two hundred people a day.

President Joe Biden was on national television last Thursday urging unvaccinated Americans to get the jabs, and declaring ‘vaccine mandates’ that oblige federal employees and companies that employ more than one hundred people to do so. He even allowed himself a little anger towards the more than 80 million Americans who are still refusing vaccination.

“We’ve been patient, but our patience is wearing thin, and your refusal has cost all of us. So, please, do the right thing. But just don’t take it from me; listen to the voices of unvaccinated Americans who are lying in hospital beds, taking their final breaths, saying, ‘If only I had gotten vaccinated’.”

But there’s a puzzle here. Deep down, Biden must realise that the unvaccinated are doing him a favour by dying in large numbers. More than 97 per cent of those two thousand dead a day are not vaccinated, and it’s a safe bet that at least 90 per cent of them are Republicans.

The vast majority of anti-vaxxers who are still alive by next year’s mid-term elections will vote Republican, and if they all make it that far then the present ultra-thin Democratic majorities in both houses of Congress could easily evaporate. In the circumstances, therefore, Biden’s attempt to keep Republican voters alive borders on the quixotic.

Or does it? A more cynical analysis suggests that he may be making a two-way bet. He is getting credit for doing his duty as president and trying to protect all Americans’ lives, but at the same time the added pressure that his new measures put on anti-vaxxers is likely to drive them even deeper into their rejection of science and logic.

Joe Biden would need to be a great deal more naive than his career suggests to truly believe his appeals to the unvaccinated will have the right effect. Luckily for the Democratic Party, he is almost bound to fail.

Republican governors from Georgia to Arizona are already planning to make legal challenges to his new vaccine mandates, and at the least they will probably manage to tie them up in the courts long enough to ensure that lots more Republican voters die. So in the end it comes down a kind of race.

On the one hand, almost all Republican-controlled states are passing new voter-suppression measures to make voting harder for Democratic supporters, and especially for those who are poor and/or non-white.

It’s bound to have some success, because these are often people who don’t have cars (make the polling stations few and far between), can’t get time off work (no Sunday voting), are suffering from ill-health (no mail-in ballots), etc.

On the other hand, a significant proportion of Republican voters are striving to remove themselves from the gene pool by refusing to be vaccinated, and they can’t vote Republican if they are dead. Losing an extra 50,000 guaranteed Republican voters to Covid-19 each month is bound to have an impact in at least some marginal elections next year.

Which trend will shift the needle more strongly remains to be seen, but it is bound to be a topic of furious in-house debate among Republican electoral strategists. You can safely assume that they have the relevant numbers at their fingertips, but that they are finding it almost impossible to shift the ideology.

It’s generally seen as insensitive to talk about this sort of thing in public, but admit it: wouldn’t you like to be a fly on the wall when they debate this matter among themselves?