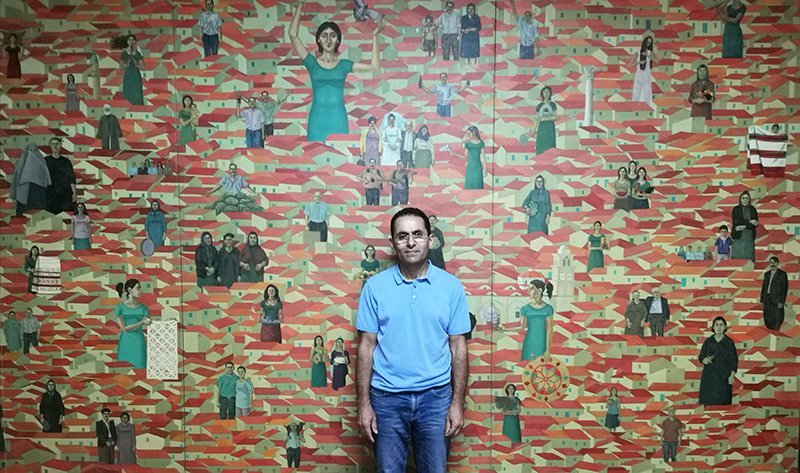 Cabinet on Wednesday announced that the disciplinary procedure against controversial public school headteacher and artist Giorgos Gavriel will be dropped, amidst wide condemnation of the way the government handled the matter.

According to an official statement, during the discussion of the issue at the council of ministers, “a violation of the letter and spirit of the regulations governing the conduct of education officials and directors was found.”

Nevertheless, it added, and in view of the fact that political forces and Letters and Arts bodies considered that the freedom of artistic expression is persecuted, “even if for a large part of citizens it is a provocation and an insult to institutions”, the Council of Ministers authorised the education minister to address the attorney-general for the immediate termination of the disciplinary prosecution of the high school headteacher in question.

It said this decision, was taken “to avoid creating wrong impressions about the government’s intentions.”

The minister also told state broadcaster CyBC radio in the morning that Gavriel’s referral to the public education disciplinary committee over art work produced last year deemed insulting to the state and religious/national institutions followed a decision by the legal service.

But Attorney-general Giorgos Savvides countered that Gavriel’s disciplinary prosecution was a political decision by the education ministry and did not concern any criminal offences that would justify the legal services’ involvement. He clarified that the legal service acted as the education ministry’s lawyer in this case and based on the ministry’s decision to launch the disciplinary procedure against Gavriel.

In the meantime, head of the displinary committee Panayiotis Antoniou said according to the ruling sent to them by the legal service Gavriel was accused of lack of decency and of obscenity. He said Gavriel was to be invited before the committee on October 6 to answer these charges and that the case could be withdrawn after consultations between the legal service and the education ministry.

“I was surprised to hear the statements of the education minister,” Savvides said.

He explained that the jurisdiction to initiate disciplinary proceedings, based on the law, rests with the competent authority, in this case the education ministry. This, he said, covers the order to launch a disciplinary probe, file such a case and, even withdraw it.

“We, as legal service, decide on criminal responsibilities and in this case, we decided that we will not proceed with a criminal investigation,” Savvides said. He added that as the ministry’s lawyer the legal service put some data within a legal framework based on the material sent to them by the ministry.

“We do not make political decisions to initiate or withdraw any disciplinary proceedings,” he said.

Earlier, Prodromou said his ministry was forced to refer Gavriel for disciplinary action due to regulations that should be scrapped. The education ministry had said last year when Gavriel’s paintings were released that they had created “a sore impression” and caused great upset among pupils, parents and public opinion.

Public school headmaster Gavriel, whose artworks raised much controversy last year, was summoned by the committee for a disciplinary hearing over the matter. He was accused of behaving in such a way that he failed to perform his main duties and that his actions, repeatedly publishing his artwork, despite being told to stop, were not in line with his position as headteacher.

The case spurred widespread condemnation initially from opposition parties and individuals, mainly against Prodromou for not stopping this procedure.

Critics accused the education ministry of totalitarianism and utter lack of respect for freedom of expression since Gavriel was working on and promoting his art during his own free time and not during his working hours.

The move was also deemed as yet another attempt by the government to appeal to the far-right groups within society pending the 2023 presidential elections.

Main opposition Akel called for Prodromou’s resignation citing Gavriel’s case and the way the education ministry handled the matter of the English textbook with a reference to Kemal Ataturk and the call on teachers tear that page out.

“He blames the legal service for the hunting of artworks, the ministry’s bureaucrats for the mediaeval tearing of book pages, and hides behind everyone else as regards his generally authoritarian and backward behaviour, while we all know that all this was his own political decisions,” Akel MP Christos Christofides said. The party said it has put the book issue up for discussion at the House education committee.

Ruling Disy joined in the condemnations on Wednesday with a statement expressing its disagreement with the disciplinary actions against Gavriel, citing artistic freedom.

The party, however, pointed out that disciplinary procedures that may concern the duties of a headteacher are provided for in the regulations which parliament itself passed. Disy said they were ready to work “to rectify and modernise these regulations.”

Diko had called on the government to immediately withdraw the charges against Gavriel, arguing the case sends “completely wrong, anti-democratic and anti-European messages to wider society.”